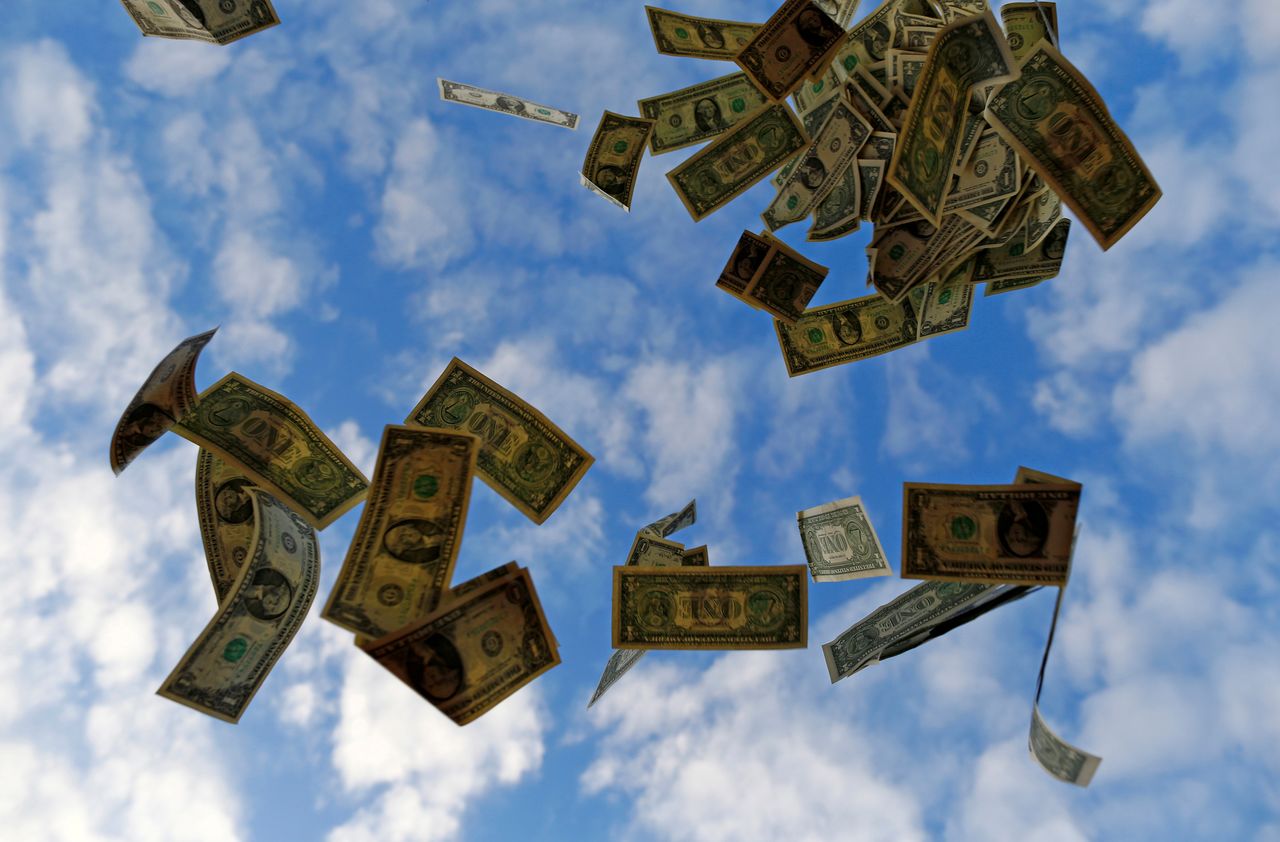 LONDON (Reuters) - Is the tide receding for global asset prices, just as the real economic recovery is on the rise?

A high water mark for the global money swell that lifted financial markets in the middle of the first pandemic lockdowns last year may already have been set, and the subsequent liquidity outflow may see assets struggle.

Specialists who track market liquidity say it is not the total amount of money in the system that drives asset prices, rather the 'excess money', which is the supply above and beyond emergency or precautionary demands for cash.

By some metrics that excess is ebbing fast, which helps explain why pepped up stocks and bond yields have lost their zip over recent weeks and why inflation anxiety has eased just as headline rates for price rises start are on the up.

At least some of the overflow swept into stock markets, with global stock prices almost doubling to record highs from last March's nadir and still some 20% above pre-pandemic highs as a bounceback in activity gets underway.

But the picture has become confusing, with stock prices running aground near record highs.

The pace of the G4 central bank asset purchases has certainly slowed - even if temporarily in some cases. Combined with inflation fears this whacked bonds at the end of the first quarter, upsetting the "cheap borrowing forever" narrative.

But even that bond move had flattened out, with anecdotal evidence suggesting we may be back at square one.

Bank of America's monthly fund manager surveys shows last year's initial jump in average percentage cash holdings of about two points to 10-year highs near 6% has already been fully unwound and has settled at pre-pandemic levels about 4%.

Total cash held in U.S. money market funds, however, remains about $800 billion more than early 2020 levels - even if still about $300 billion off last year's peaks.

Liquidity analyst Cross Border Capital says that its index of domestic U.S. liquidity conditions is already past its peak and the percentage of central banks running loose monetary policies has fallen to 82% in March from 88% in January.

JPMorgan's flows and liquidity team has tried to clear up the picture by re-examining three key metrics of 'excess money supply' that has tracked through the crisis.

The first is when global money supply rises relative to income and spending, or as a ratio of nominal world economic output. It says that gauge, which jumped from 1.15 to about 1.4, peaked in January and will decline further as GDP expands.

Its second compares rising global money supply relative to the overall stock of stocks and bonds held by investors other than those held by banks for regulatory purposes.

JPMorgan concludes that this 'excess' has fully evaporated, with last year's jump in that ratio reversing in part due to an expansion of newly issued public equity and a new listing rush.

The final factor is arguably the most debatable and relates to the degree to which people hold cash for precautionary reasons and not immediate spending or investment.

For this JPMorgan has a model of precautionary cash demand based on "Economic Policy Uncertainty" indices that largely hinge on key words in news coverage.

As these global and U.S. uncertainty indices have plunged back to pre-pandemic levels, after the U.S. election and arrival of COVID-19 vaccines, money supply has skyrocketed relative to these proxies for money demand.

However, JPMorgan reckons that even the level of excess money is also cresting as uncertainty indices have probably fallen as far as they are likely to go just as nominal money supply ebbs, GDP expands and the equity universe increases.

"All three methodologies point to the same direction, that excess money supply or excess liquidity has likely peaked."

Changes to the course of the virus and efficacy of vaccines could of course change many of those assumptions about a seamless recovery ahead - as could expectations for the gradual slowing of central bank money printing later this year.

New factors beyond the pandemic - such as geopolitical tensions, policy accidents, corporate or banking surprises - could equally shift the dial again too.

But if the sometimes peculiar surge of the markets during the worst economic shock in a generation did indeed hinge on this view of excess money, then stock prices may well surprise in reverse during what's likely to be a record recovery ahead.