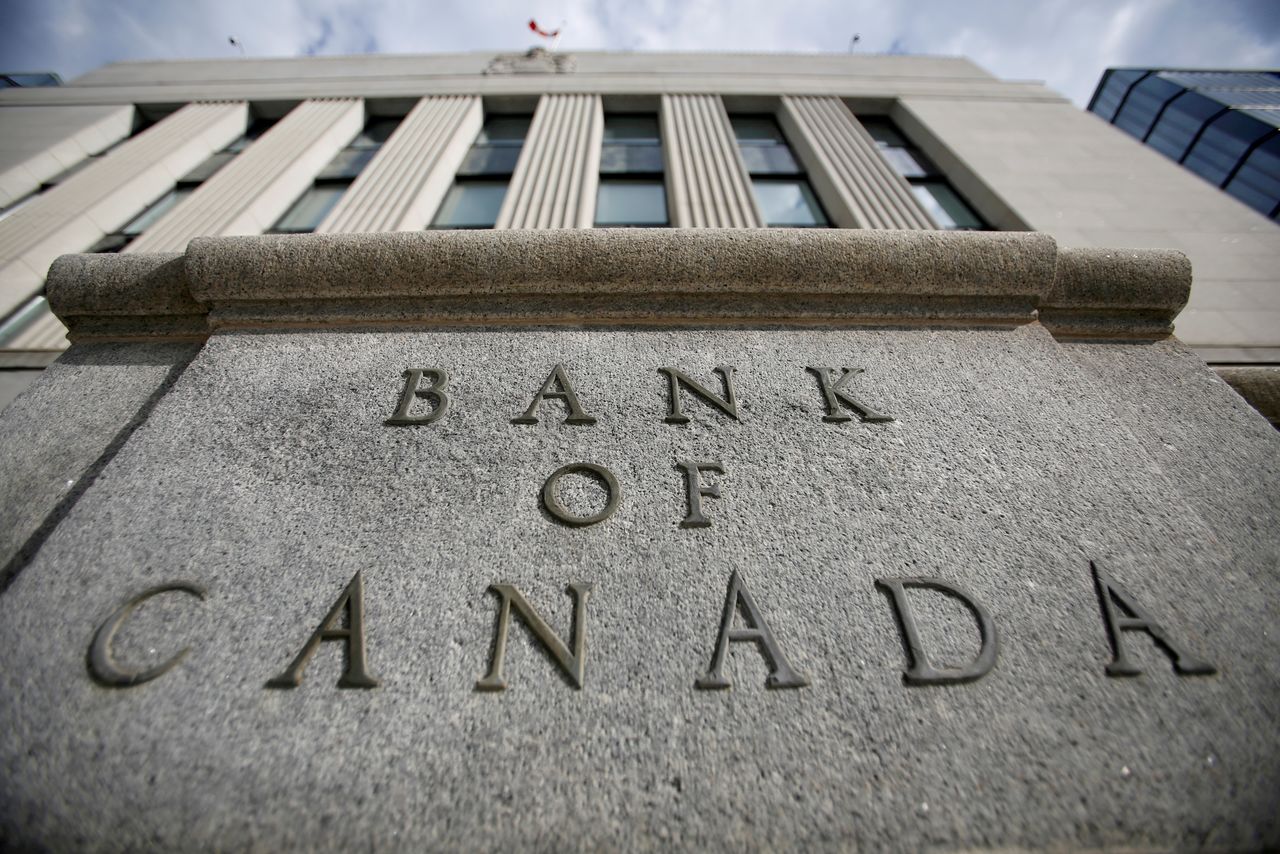 FILE PHOTO: A sign is pictured outside the Bank of Canada building in Ottawa, Ontario, Canada, May 23, 2017. REUTERS/Chris Wattie

LONDON (Reuters) - The Bank of Canada set the taper ball rolling last week, becoming the first major central bank to cut back on pandemic-era money-printing stimulus programmes. So who's next?

The big guns of central banking - the U.S. Federal Reserve, European Central Bank and the Bank of Japan - won't officially pare stimulus for a while, a message the BOJ reinforced on Tuesday and one the Fed is expected to reiterate on Wednesday.

Yet the Bank of Canada's C$1 billion ($806 million) cut to its weekly bond-buying programme may remind investors that the next phase in 2021 will be the taper phase, John Briggs, global head of strategy at NatWest Markets, told clients.

With economic data confirming a brighter outlook, Bank of America estimates central bank asset purchases in the United States, Japan, the euro zone and Britain will slide to about $3.4 trillion this year from almost $9 trillion in 2020.

Here's a look at who is tapering, who may raise interest rates and who might be the last to call time on pandemic-era monetary stimulus.

For a graphic on major cbanks:

Norges Bank is at the vanguard in terms of signalling a retreat, having flagged last month that a rate rise may be coming in the second half of 2021. That has made the crown this year's best performing G10 currency.

The central bank doesn't intervene in bond markets, so the taper debate is not applicable.

Having announced tapering, Canada has signalled that its key interest rate could rise from 0.25% late in 2022.

For a graphic on Canada's bond market takes tapering in its stride:

The Fed plans to keep borrowing costs near 0% and maintain monthly asset purchases worth $120 billion until it sees "substantial further progress" towards full employment and its 2% flexible inflation target.

But with the economy expected to grow by more than 6% this year and inflation to be a "little higher" - according to Fed boss Jerome Powell - markets are pricing in a rate rise in 2023 and many analysts expect tapering to start this year.

The Fed faces a delicate balancing act, ensuring that tapering at a time of massive U.S. government borrowing does not push up Treasury yields too much.

Pictet Wealth senior economist Thomas Costerg expects tapering to start by early next year and proceed at a monthly pace of $10 billion. He said that means the process would last about a year - "enough to keep expectations for the first rate hike well in the distance".

For a graphic on Central bank holdings of government bonds:

The departure of Andy Haldane, the Bank of England's hawkish chief economist, has raised expectations that the central bank's 895 billion pound ($1.2 trillion) bond-buying scheme won't be reduced any time soon. The BoE expects inflation will be running at 1.9% by the end of this year but says the rise is likely to be capped over the medium term by labour market weakness.

Still, NatWest analysts believe the BoE could announce a 4 billion pound reduction in its so-called quantitative easing (QE) in May, trimming it to 14 billion pounds a month.

Money markets see a 56% chance of a quarter-point interest rate rise by the end of 2022.

Technically, this runs until March 2022 but some officials are already advocating reducing bond purchases as the economy strengthens.

Danske Bank analysts reckon the ECB will end up using only 1.65 trillion euros of the total PEPP stimulus package.

"For all we know at this stage, PEPP is coming to an end in March next year, so if you think about the slowdown from the current pace, that could come as soon as June," said Andreas Billmeier, European economist at Western Asset.

For a graphic on When will the ECB slow the pace of its emergency bond buys?

Australia's economic rebound has surpassed expectations and is set for an "above trend" expansion, the Reserve Bank of Australia said in April. But the bank, which has underscored its dovish credentials by adopting yield curve control, could be among the last to tighten policy.

It wants unemployment slashed and inflation within its 2% to 3% target before shifting tack, but doesn't see either happening until 2024. Economists expect rates to stay on hold until then and reckon the RBA could even extend asset purchases by another A$75 billion to A$100 billion ($58 bln to $77 bln).

New Zealand's strong recovery and red-hot property markets have raised speculation that a rate rise may come sooner than expected.

While its key interest rate is expected to stay at 0.25% this year, some analysts predict a rise in the second half of 2022. The central bank meanwhile appears to be in no hurry to taper its NZ$100 billion ($72 billion) QE programme.

Swedish inflation is approaching the Riksbank's 2% target but it has said interest rates would stay at 0% for years. However, its 700 billion crowns ($84 billion) asset purchase programme will wind down this year as planned.

The BOJ pledged this week to maintain stimulus using a yield target and purchases of government bonds and equities.

It has been accused of "stealth tapering" because its bond-buying has slowed since yield curve control (YCC) was adopted in 2016, though purchases have picked up slightly in the past year.

In March, they were about 22.2 trillion yen ($204 billion)above levels a year ago. But that's still a quarter of the 81.96 trillion yen year-on-year increase in August 2016, just before YCC came in.

For a graphic on BOJ steadily ‘stealth’ tapering its JGB buying:

The Swiss National Bank does not intervene in domestic bond markets, instead capping the Swiss franc through interventions which came to nearly 110 billion francs ($120 billion) in 2020. The proceeds are used to purchase foreign bonds and equities.

The franc is less over-valued than before but the SNB shows no signs of departing from its interventionist policy and its minus 0.75% interest rate won't rise any time soon.