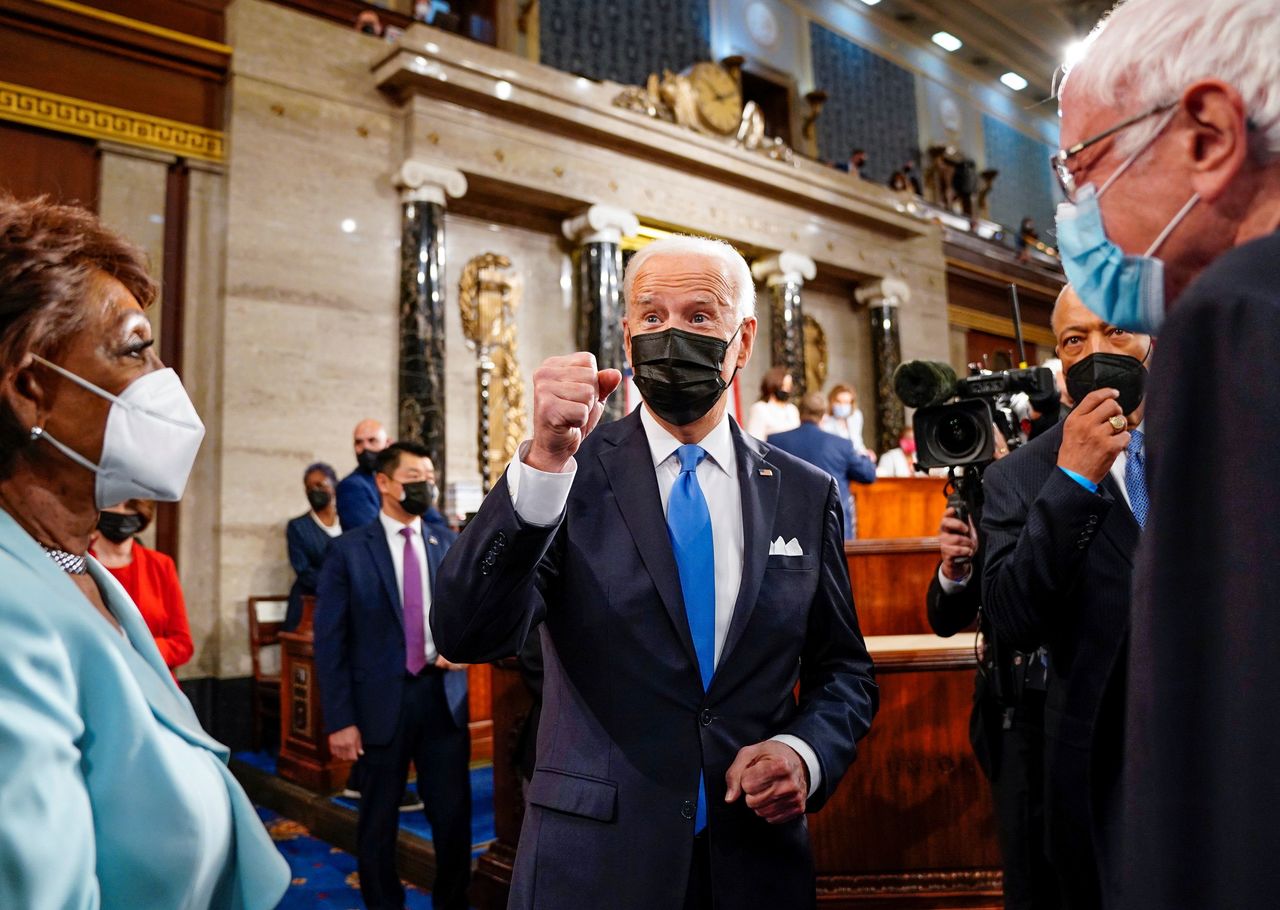 U.S. President Joe Biden gestures as he leaves the House Chamber with Rep. Maxine Waters (D-Calif.) and Sen. Bernie Sanders (I-Vt.) after delivering his first address to a joint session of Congress in the House chamber of the U.S. Capitol in Washington, U.S., April 28, 2021. Melina Mara/Pool via REUTERS

By Nandita Bose and Jarrett Renshaw

Washington (Reuters) - U.S. President Joe Biden used his first joint address to Congress to plead with dozens of lawmakers in the room to work together and detailed a $4 trillion economic plan he said would make the country more competitive with China.

Here are a few key takeaways:

It's a tradition for U.S. presidents to give their diagnosis of the nation during an address to Congress. Biden made the case that thanks to a successful vaccine roll out and a $1.9 trillion relief package, the United States, which has lost more than half a million people to the coronavirus, is on the upswing.

"Now - after just 100 days - I can report to the nation: America is on the move again. Turning peril into possibility. Crisis into opportunity. Setback into strength," Biden said.

Wednesday marked the first Presidential speech to Congress in which two women sat behind the President on the dais - Speaker of the House Nancy Pelosi, and Vice President Kamala Harris. Biden recognized the historic moment at the top of his speech.

THE END OF TRICKLE-DOWN?

Seeking a historic reshaping of the U.S. economy, Biden laid out plans to tax wealthy Americans and corporations, in order to fund massive investments in infrastructure, education, and low-income and middle-class families.

"My fellow Americans, trickle-down economics has never worked. It's time to grow the economy from the bottom up and middle-out," Biden said.

The U.S. and China are locked in a battle for global influence and a large part of Biden's argument for investing more in the U.S. economy was the need to compete with and win against China.

"America will stand up to unfair trade practices that undercut American workers and industries, like subsidies for state-owned enterprises and the theft of American technologies and intellectual property," he said.

Chinese president Xi Jinping is "deadly earnest about becoming the most significant, consequential nation in the world. He and others, autocrats, think that democracy can't compete in the 21st Century, with autocracies," Biden said.

A DEADLINE FOR A POLICE BILL

Biden urged Congress to pass legislation to overhaul policing practices by the first anniversary of George Floyd's death next month. This was the first time the President put a deadline on the issue.

"We have all seen the knee of injustice on the neck of Black America. Now is our opportunity to make real progress," Biden said.

Biden called the Jan. 6 attack on the U.S. Capitol a dark day in the nation's history, arguing that America's rivals abroad saw it as an opportunity to seize on division.

He pressed Congress to come together and show the world the United States can still get things done.

"They look at the images of the mob that assaulted this Capitol as proof that the sun is setting on American democracy. They are wrong. And we have to prove them wrong. We have to prove democracy still works."