By Elizabeth Howcroft and Ritvik Carvalho

LONDON (Reuters) - The pound, enjoying a period of calm after 4-1/2 years of Brexit-linked chaos, may suffer some turmoil if an election next week raises the chances of Scottish nationalists calling -- and winning -- a vote on independence from the United Kingdom.

Such a vote is unlikely for some time, and indeed the United Kingdom government says it will not permit one at all. But analysts reckon the chance of Scotland breaking away, while still small, is rising, and the pound will react if and when a referendum looks like a certainty.

"If a country accounting for 7.5% of the UK's GDP decides to go its own way, it matters for the market," Nomura foreign exchange analyst Jordan Rochester said.

Prime Minister Boris Johnson has vowed to block another referendum after the last one in 2014 -- economists and analysts interviewed by Reuters mostly expect him to stick to that.

The SNP says if it wins a majority in the May 6 election for the devolved Scottish Parliament, the assembly would pass its own bill to hold a second referendum by end-2023.

Morgan Stanley puts the chances of a successful independence bid at just 15%.

Citi, on the other hand, estimates a 35% probability of "Scexit" in the next 10 years -- too distant to immediately impact investor behaviour. Probabilities based on odds by online betting exchange Betfair show most punters do not expect an independence vote at least until after 2025.

For a graphic on Betting markets see low chance of Scottish independence vote in 2021:

Yet much depends on the size of any SNP victory on May 6.

Should nationalists win 80-plus seats in the 129-seat parliament, a vote before 2024 becomes Citi's base case. It also warns that risks of more sterling volatility could grow in the coming months as Westminster and Holyrood tussle.

The pound, after a strong start to 2021, has struggled to break above $1.40 this month. Implied volatility gauges -- measures of expected swings in the pound -- have dropped.

Versus the euro, sterling fell sharply in early April, erasing some gains after its strongest first quarter since 2015.

For a graphic on Pound stalls after solid start to 2021:

Stephen Gallo, European head of FX strategy at BMO Capital Markets, calls the elections a "moderately important issue", which may have caused some recent sterling weakness.

The consensus is "there will be a second referendum at some point" and that the Scottish government will find a way to have an advisory referendum if Johnson blocks a straightforward vote, he said.

The UK's vote to leave the European Union in 2016 has since strained ties, and Nicola Sturgeon, Scotland's first minister, has seized on criticism over Boris Johnson's handling of the COVID-19 pandemic to push for independence. In the Brexit referendum Scotland backed Remain by a 62% to 38% margin.

Polling currently suggests around half of voters would opt for independence.

Despite Johnson's opposition, half the people polled recently by Ipsos MORI thought Scotland should be allowed another referendum on whether to leave the United Kingdom.

Pricing the timing of a referendum is only part of the puzzle for currency traders. Understanding the impact on the UK economy -- and the pound -- is another.

Sterling dived by "ten big figures" -- market parlance for ten cents -- against the dollar as the probability of a Scottish "Yes" vote surged in 2014, Citi analysts note

But ending the 300-year old union is unlikely to prove as economically damaging as Brexit or COVID-19.

Independence would lower national income between 4.3% and 6.7% in Scotland, but by just a few tenths of a percent in the rest of the UK, according to Goldman Sachs research. Scotland may even suffer an exodus of companies -- NatWest for instance would move its headquarters, CEO Alison Rose said

A UK economy shorn of Scotland may even emerge stronger.

Whether Scotland would take a share of the UK's 2 trillion pounds of public debt is another unknown.

"The reality is we won't know the economics of it for a good five years until after the event," UBS economist Dean Turner said. "We had a four-year divorce from the EU. Let's just say that would be an optimistic time frame for the divorce with Scotland." 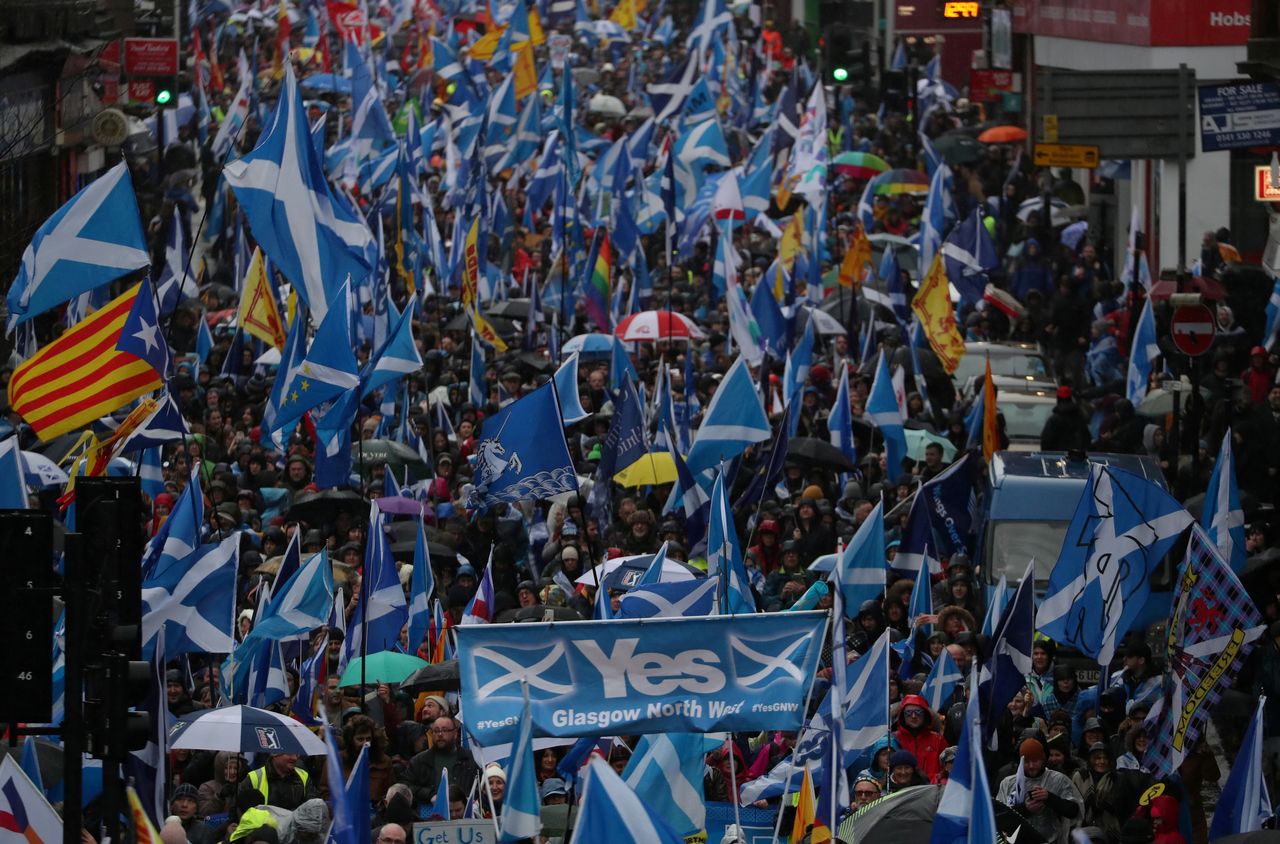 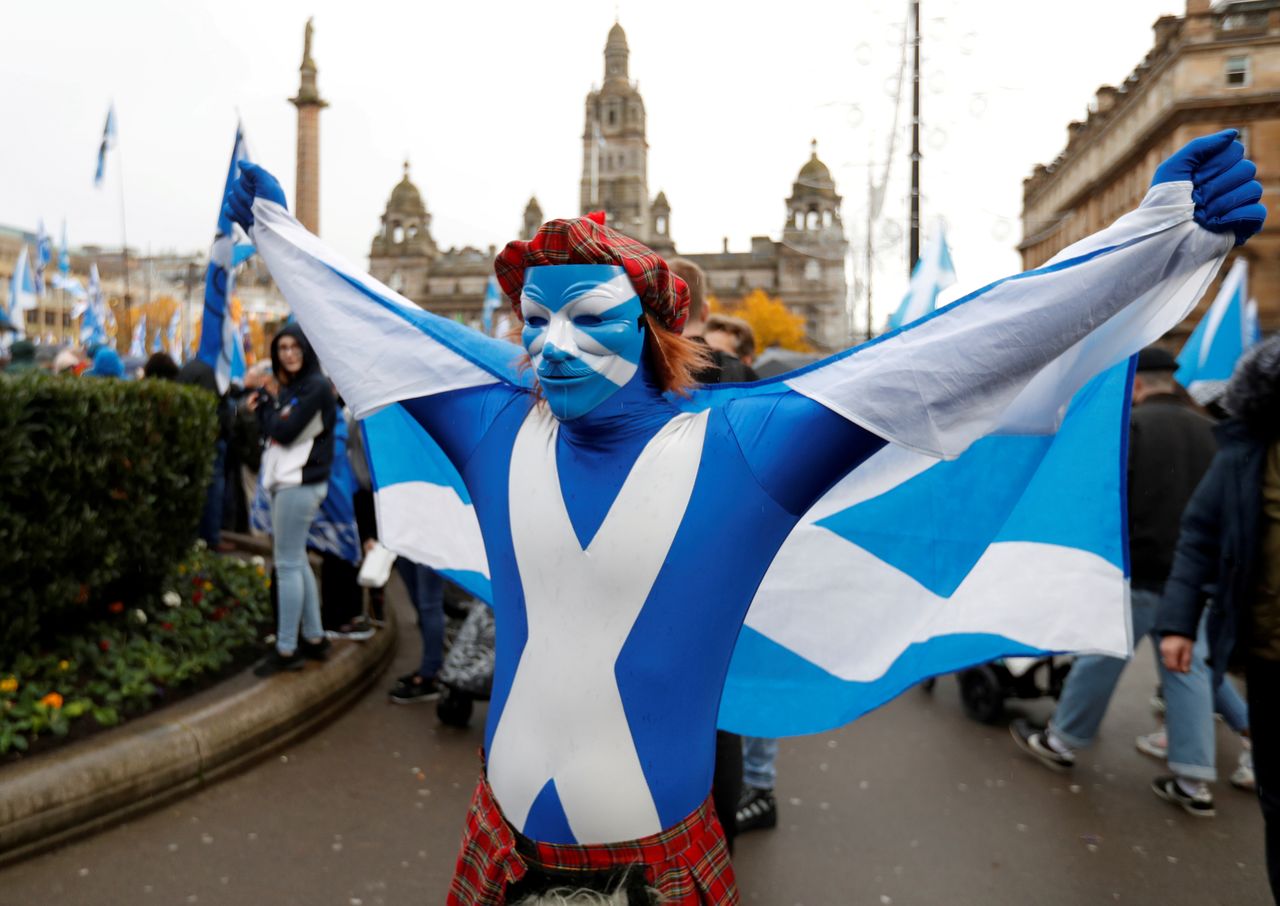