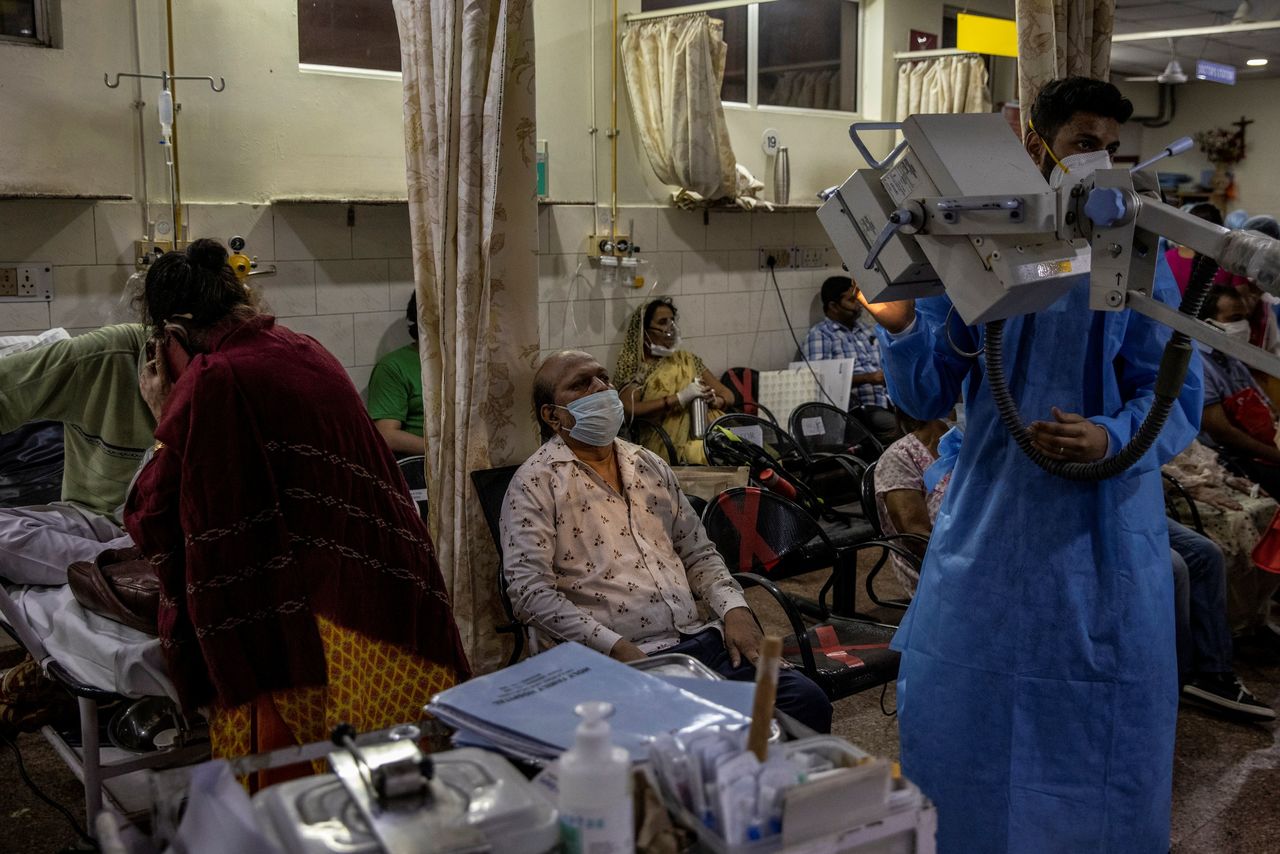 By Rodrigo Campos and Marc Jones

NEW YORK/LONDON (Reuters) - Indian financial markets have struggled this month as the world's worst COVID-19 crisis engulfs the country but international investors are betting the economy will rebound quickly once the pandemic has passed.

Data shows that more foreign investment money has left India this month than came in during the whole of the first quarter, as a catastrophic spike in deaths leaves the world's second most populous country in turmoil.

Before the upsurge, the International Monetary Fund, banks and ratings agencies were all predicting an impressive double-digit rebound in growth this year, but many of those forecasts will now have to be ripped up.

For a graphic on COVID-19 cases in major Indian cities:

JPMorgan's Indian economists have slashed their Q2 GDP estimates to a seasonally adjusted -16% quarter-on-quarter from 6.5% and still see risks of a larger stumble if the health crisis continues unabated.

Citi sees a "significant" chance it will have to cut its forecasts too, while credit rating agency Fitch estimates the government's fiscal deficit will nearly double to 14% of GDP this year and push India's debt-to-GDP ratio over 90%.

"It is a really sad situation," said Lombard Odier's emerging market FX strategist Kiran Kowshik, adding that the crisis was being compounded by India's weak health system and the fact that many workers in informal sectors need to able to get around to make a living.

The Indian rupee has been one of the world's worst performing heavyweight currencies this month, down nearly 2%.

Indian stocks have underperformed the big global indexes by nearly 7% and those in Brazil, which has also in the grip of a serious COVID-19 surge, by nearly 12%.

For a graphic on Indian stocks dragged down by COVID:

Including bond market selling, Societe Generale estimates international investors have yanked out over $6 billion from India in April.

But with new targeted lockdowns, the government reining in vaccine exports, and ventilators and other support now arriving from abroad, Mumbai's $2.4 trillion Sensex stock index has recovered some ground and the rupee is heading for its best week since August.

"Prime Minister Modi, and the partial structural reform hopes he represents for investors, is neither sufficiently vulnerable politically, nor are Indian equities sufficiently expensive relative to history, to throw the towel in on what remains the best country pick in large emerging markets," said Hasnain Malik, head of equity research at Tellimer.

For a graphic on India's rupee falls on COVID woes:

The $600 billion of FX reserves the central bank has built up should meanwhile cushion any capital outflows, and unlike last year, credit rating agencies have stayed clear of downgrading India, which would push it out of the investment-grade bracket.

Although Fitch warned about the debt rise and the likelihood already-weak state banks will need more aid, it still believes the economy could grow 12.8% this fiscal year -- which runs March to March -- after shrinking nearly 8% last year.

"The thing about India is that public deficits and debt is high, but it is held almost exclusively domestically and the country has a very strong track record of growth," said one of S&P Global's top sovereign analysts, Frank Gill.

For a graphic on India's stock market has soared in value:

Lombard Odier's Kowshik points out that this month's equity market fall comes after $36 billion was ploughed into Indian stocks between September and March.

Aviva's head of Asia and global emerging markets Alistair Way says his firm is tentatively looking at some beaten-down Indian shares again, while others see boosts for the country's nascent domestic bond market.

The central bank has embarked on quantitative easing and authorities are hopeful influential investment index providers like JPMorgan and Bloomberg will soon include India, one of the only investment grade-rated countries still not in those benchmarks.

Foreigners own just 2% of Indian government debt, roughly compared to 20%-40% in nearby Indonesia and Malaysia, but index inclusion could quickly change that.

The government has already eased stringent foreign ownership limits that had been a big hurdle for inclusion. Analysts say it is also likely to need to be part of the key Euroclear ecosystem where buying and selling bonds is easier.

The $20-30 billion that could bring in over time "would go a long way to funding the COVID-related fiscal deficit this year," he said.

(Reporting by Rodrigo Campos in New York and Marc Jones in London; Editing by Catherine Evans)