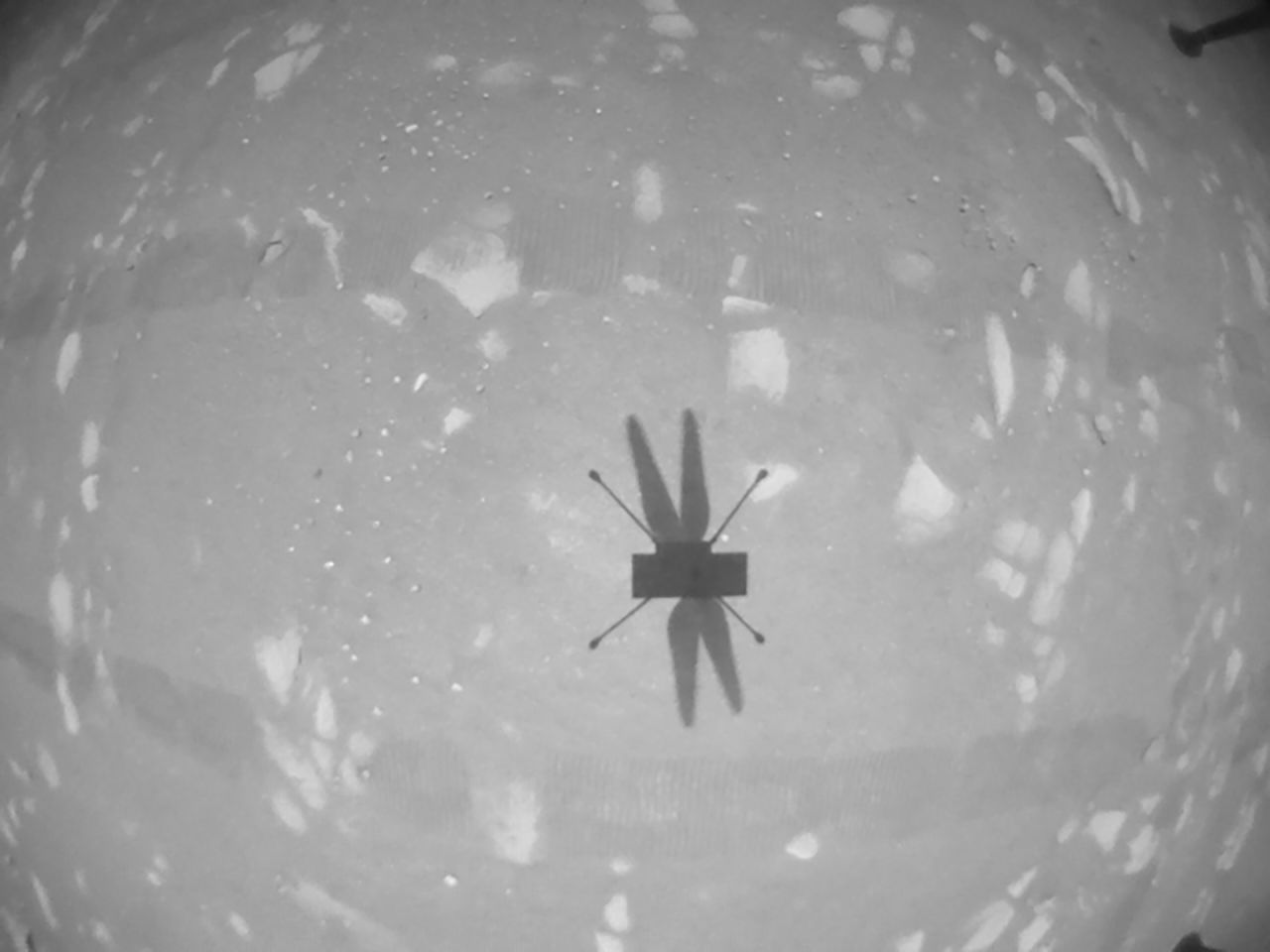 FILE PHOTO: The shadow of NASA's Mars helicopter Ingenuity is seen during its second flight, captured by its black-and-white navigation camera April 22, 2021. NASA/JPL-Caltech/Handout via REUTERS

LOS ANGELES (Reuters) - After exceeding all expectations with its initial four test flights, the first ever by an aircraft over the surface of another planet, NASA's tiny Mars robot helicopter Ingenuity is ready for graduation.

The U.S. space agency announced on Friday that Ingenuity is shifting from a pure proof-of-concept, technology demonstration mode to a more ambitious mission gauging how aerial scouting and other functions might benefit future scientific exploration of the Red Planet.

Ingenuity's 30-day planned project extension was outlined during a briefing from its mission control center at NASA's Jet Propulsion Laboratory (JPL) near Los Angeles, where the twin-rotor aircraft was designed and built.

The new "operational demonstration" phase of the 4-pound (1.8 kg), solar-powered chopper began with its fourth takeoff on a nearly two-minute flight Friday morning,

Data returned from Ingenuity later in the day showed that it covered a round-trip distance of 872 feet (266 meters) - roughly the length of three American football fields - at a speed of almost 8 miles per hour (3.5 meters per second).

The helicopter flew at height of about 16 feet (5 meters), considered ideal for the ground-surveillance work it was performing while aloft and matching the altitude of its second and third flights.

The latest outing topped the speed and distance records set on Sunday by flight No. 3, which went farther and faster than the test flights conducted on Earth.

While humble in terms of mere metrics, NASA likened the achievement to the Wright Brothers' historic first controlled flight of their motor-driven airplane near Kitty Hawk, North Carolina, in 1903.

For NASA, the challenge was powering an aircraft in the ultra-thin air of Mars, whose atmosphere is just 1% as dense as Earth's, making it especially difficult to generate aerodynamic lift. To compensate engineers equipped Ingenuity with rotor blades that are larger and spin far more rapidly than would be needed on Earth.

The miniature helicopter hitched a ride to Mars strapped to the belly of the NASA science rover Perseverance, a six-wheeled astrobiology lab that landed on Feb. 18 in a vast basin called Jezero Crater after a nearly seven-month journey through space.

Except for a computer software glitch that has twice delayed Ingenuity flights, the rotorcraft has operated flawlessly, meeting all technical objectives in its first three flights on Mars, said MiMi Aung, Ingenuity project manager at JPL.

"And now it's like Ingenuity is graduating, from a tech-demo phase to the new ops-demo phase," she said.

On its latest jaunt, Ingenuity snapped 60 black-and-white images and several color photos of the Martian surface while buzzing over the planet's reddish-orange landscape.

The pictures will be fashioned into three-dimensional digital elevation maps for use in selecting a suitable new takeoff and landing zone for later flights.

Similar tracking operations could also be used to help mission managers conduct low-altitude science observations of sites not easily reached by a rover, and to scout for preferred rover routes to various surface destinations.

The next flight, No. 5, will send Ingenuity on a one-way trip to a new "air field" in two or three weeks as engineers continue to press the helicopter beyond its design limits, Aung said. However, mission managers will probably not push the aircraft quite so hard as they would have otherwise without its new "ops-demo" mission, she told reporters.

Meanwhile, JPL will continue preparing Perseverance for its primary mission, a search for traces of fossilized microorganisms in Jezero Crater. Scientists expect to begin collecting Martian rock samples there in July.