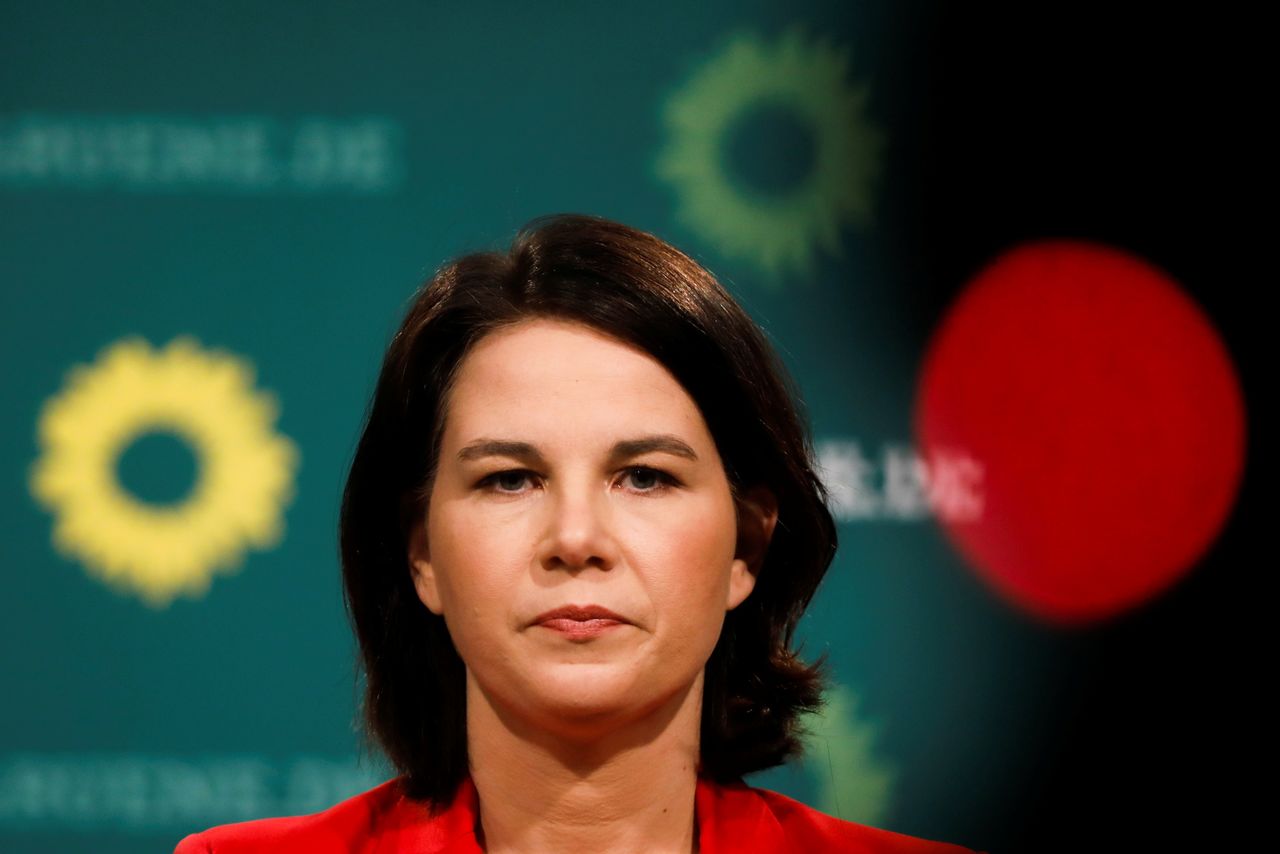 Annalena Baerbock, Germany's Green party co-leader and a top candidate for the upcoming national election in September, speaks at a news conference after a party's leaders meeting in Berlin, Germany, April 26, 2021. Markus Schreiber/Pool via REUTERS

LONDON (Reuters) - Five months is a long time in German politics but a mould-breaking surge in support for the Green party ahead of September's Federal election has markets crunching numbers to assess its likely role in the next ruling coalition.

Record high German stock prices, soaring EU carbon permit prices and less negative German debt yields all have other drivers amid hopes for and end to the pandemic shocks of the past 12 months. But they may also be partly feeding off the extraordinary Green Party push in the polls over recent weeks.

Investors seldom hold their breath for clarity on German election outcomes as coalitions often take months to form even after September poll results are known.

But with conservative Chancellor Angela Merkel stepping down after 16 years, there will be a new leader of the world's fourth biggest economy one way or another.

Over the past decade in Europe and around the world, that sort of uncertainty has typically brought handwringing about extremist fringe parties or populist disrupters.

But as the chancellery in Berlin is set to switch hands, support is swelling for the already popular and largely centrist Greens and their candidate for the top job Annalena Baerbock.

Reflecting what now appears like a Transatlantic priority to finally wrestle climate change after the pandemic, Green's level of support has made it the largest party in two of the last three national opinion polls, ahead of both the centre-right CDU/CSU bloc and centre-left Social Democrats.

That represents a big shake-up of the status quo; Deutsche Bank noted that if the polls were correct it would the first election since World War Two that the combined CDU/CSU and SPD vote would fail to be a majority.

Even with caveats about polling accuracy and shifting political sands, Deutsche reckons: "It's no longer implausible that the 40-year old Baerbock could become the first Green chancellor."

Most banks now see the Greens in government of one hue or another after September.

Hence all the colour-coded speculation about different permutations that could see anything from a "Kiwi" coalition - involving a Green-led government with CDU/CSU black - to a "traffic light" mix of Green, SPD red and yellow of the liberal Free Democratic Party.

Citi strategists say the Greens are set to be at least the second strongest party and feature in any new government. UBS Global Wealth Management calls that "extremely likely".

"Government participation by the Greens as very likely, with them possibly in the position of kingmaker," Morgan Stanley said.

Why should markets care?

"Easier fiscal either way," it added. "The balance of power has likely shifted in favour of the Greens."

But details of the Green manifesto raise a whole stream of market-related issues.

Citi calculate Green proposals for 50 billion euros a year in extra public investment over 10 years would be about 1.5% of 2019 output. If scaled to the U.S. economy, it would equate to a $3 trillion demand boost - paid for partly by tax rises.

Not unlike the new U.S. administration of President Joe Biden, Greens talk of a 25% corporate tax, a 1% wealth tax on those owning more than 2 million euros and higher income tax.

Morgan Stanley said Green polling success could see a longer suspension of Germany's constitutional "debt brake" - which limits structural Federal deficits to 0.35% of gross domestic product - and possibly even a wholesale reform to allow for more investment spending while keeping the lid on regular spending.

Fuzesi said that in essence the Greens wanted to align Germany's unilateral debt brake with EU rules that allow for structural deficits of 1% of GDP when overall debt loads are less than 60% of GDP. That alone would mean an additional 23 billion euros for those public investment vehicles.

And yet this was all within relatively conservative fiscal projections that see national debt/GDP fall to 40% over time as long as the investment spending outlined lifts growth too.

"Differences between Germany's centrist parties are often overstated," he concluded.

Eye-catching Green policies on Europe include making the EU's post-pandemic Recovery Fund a permanent part of the EU budget so the bloc can invest in the coming "green transition".

That would, it hopes, take pressure off the European Central Bank - which could then adopt a dual mandate of price stability and low unemployment, much like the U.S. Federal Reserve.

For markets punchdrunk from the pandemic shock and its huge impact on economic policies, the Green plan may even seem marginal aside from obvious environmental investments per se.

But its biggest implication may be to shape the broader "return to normal" over many years - and perhaps help sidestep the slow-growth funk that followed the last global economic shock 12 years ago.