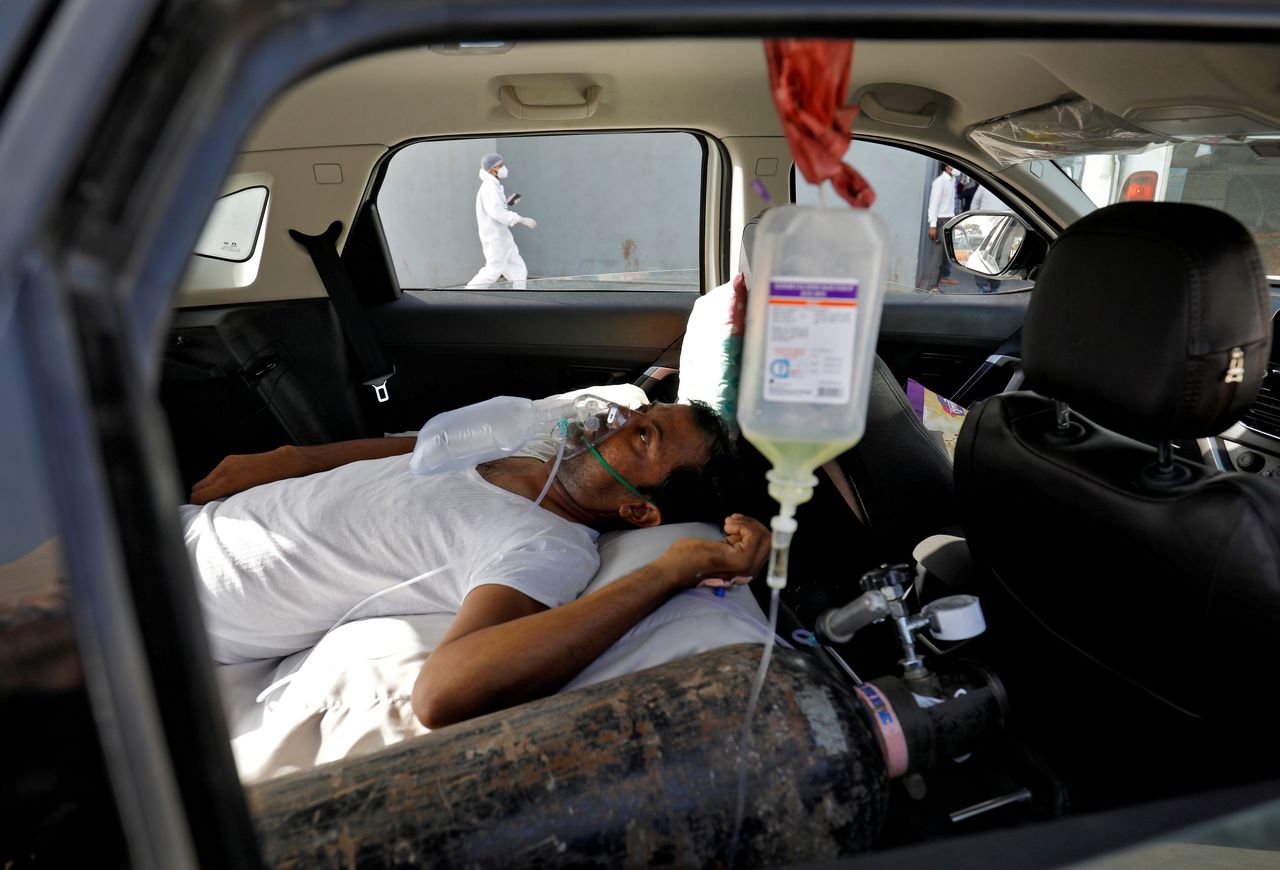 FILE PHOTO: A patient with breathing problems lies inside a car while waiting to enter a COVID-19 hospital for treatment, amidst the spread of the coronavirus disease (COVID-19), in Ahmedabad, India, April 22, 2021. REUTERS/Amit Dave

India reported a record 412,262 new COVID-19 cases on Thursday and a record 3,980 daily deaths, as a second wave of infections swamps the health system and spreads from cities into the vast countryside.

COVID-19 infections in the world's second most populous nation have surged past 21 million, with a death toll of 230,168, health ministry data show.

Government modelling had forecast a peak in second wave infections by Wednesday.

President Joe Biden on Wednesday threw his support behind waiving intellectual property rights for COVID-19 vaccines, bowing to mounting pressure from Democratic lawmakers and more than 100 other countries, but angering pharmaceutical companies.

Biden voiced his support for a waiver - a sharp reversal of the previous U.S. position - in remarks to reporters, followed swiftly by a statement from his top trade negotiator, Katherine Tai, who backed negotiations at the World Trade Organization.

“This is a global health crisis, and the extraordinary circumstances of the COVID-19 pandemic call for extraordinary measures," Tai said.

Japan's capital will seek to extend until May 31 its state of emergency aimed at curbing infections, Governor Yuriko Koike said on Thursday, a move that could spark more questions about its ability to host the Olympics.

Japan had hoped a "short and powerful" emergency would contain a fourth wave just under three months before Tokyo is set to host the Olympic Games from July 23.

While the measure now running from April 25 until Tuesday has not damped a surge of new infections, continuing it until May 31 leaves a margin of less than two months before the Games, already postponed by a year.

The swift action was taken a day after a 50-year-old man became the first reported local transmission case in New South Wales state in more than a month, with the source of his infection baffling health officials.

Further testing determined the man was infected with a variant first detected in India and genomic sequencing had linked the case to a returned traveller from the United States, but there was no clear transmission path between the two people.

Maldives will begin a night-time curfew from Thursday to control a doubling of daily coronavirus infections that was fuelled by crowds at a local election and family gatherings during the ongoing Muslim fasting month of Ramadan.

The Health Protection Agency announced the curfew on Wednesday after government data showed daily cases grew to 734 from 318 a week ago. Most of the cases reported on Wednesday were in the crowded capital Male.

Restrictions have been placed on movement between islands, although there are no curbs on tourists headed to private island resorts if they can produce a negative COVID-19 test.