One key to getting women back to work post-pandemic: Childcare

(Reuters) - Wendy Niculescu is ready to get back to work after nearly a year and a half of being a stay-at-home mom.

She is seeing more job openings in her field of nonprofit fundraising after hiring dried up last year. Niculescu and her husband also feel comfortable sending their children back to in-person day care now that they have both been vaccinated against the coronavirus.

But one major issue threatens to complicate her return to the workforce: It could take months for the couple to find a childcare provider in Portland, Oregon, with enough space for their two children, ages two and five.

"The uncertainty of not knowing what’s going to be available is very daunting," said Niculescu, 39, who is finding that many centers may not have open spots open until the fall.

More than a year into the pandemic, vaccines are widely available in the United States and hiring is picking up, with the labor market adding 916,000 jobs in March and more robust gains expected for April when the Labor Department issues an update on Friday. But some parents are finding that childcare - which was already expensive and inaccessible for many families before the crisis - is even harder to secure than it was before the pandemic.

Many childcare centers across the country are operating with fewer slots than they did before the crisis because of pandemic-related limits on capacity. Some providers, squeezed by lower enrollments and higher costs, closed permanently during the crisis. Others are running with fewer hours.

The number of licensed childcare providers was 13% lower in December than it was a year earlier, according to the most recent figures available from Child Care Aware of America, a national organization that advocates for broader access to quality childcare.

By February, the number of people working in the childcare industry was down 16% from pre-pandemic levels, according to Labor Department data. And as of March, many childcare providers were running with less than 60% of the attendance they had before the pandemic, according to Procare Solutions, which provides software to more than 30,000 childcare centers.

Now, as more parents like Niculescu seek care, the providers that remain are struggling to keep up with the higher demand.

"Once parents start going back to work, particularly mothers who are going to be re-entering the workforce, will there be enough supply of care to meet the needs of families?" said Mario Cardona, chief of policy and practice for Child Care Aware of America.

Addressing such shortages in childcare will be pivotal to helping the U.S. economy fully recover from the recession caused by the pandemic, economists say.

"It’s pretty clear that women will make or break this economic recovery and mothers are going to be at the center of it," said Kathryn Anne Edwards, a labor economist at the RAND Corporation. "Will mothers work? ... It is an economic question that has probably never been larger than it is right now."

Both mothers and fathers with young children under age five left the labor force at relatively high rates last April when the pandemic struck, according to research released in February by the Federal Reserve Bank of Minneapolis. But while nearly all fathers returned to work by November, mothers saw almost no improvement.

For a graphic on Mothers struggle to return to work:

Separate research to be released by the Fed later this month found that 22% of parents said they were either not working or working less because of disruptions to childcare and in-person schooling, Fed Chair Jerome Powell noted in a speech on Monday. The share increased to 36% for Black mothers and 30% for Hispanic mothers.

President Joe Biden unveiled a plan in April that would create universal pre-school for three- and four- year-olds and cap childcare costs at 7% of income for low- and middle-income families.

That would be in addition to the nearly $50 billion in government aid passed by Congress to help stabilize the childcare industry and make care more affordable for families through tax credits temporarily expanded this year.

But Republicans in Congress are not in favor of Biden's proposed tax increases or of spending more on education or childcare. And advocates say it will be important to invest in the areas that faced childcare shortfalls and affordability challenges even before the pandemic.

Childcare shortages are especially acute in states such as Oregon, where every county was considered a "childcare desert" before the pandemic - meaning there was only one childcare spot available for every three infants or toddlers in need of care, according to a 2019 report by Oregon State University that was commissioned by Oregon's Early Learning Division.

"We didn’t have enough care before," said Ren Johns, the founder of PDX Waitlist, a company that helps parents find childcare. Then some centers closed, further reducing capacity, Johns said.

The total number of available childcare spots in Oregon dropped by 35% from pre-pandemic levels after some centers shut down and the state limited group sizes during the pandemic, according to Oregon's Early Learning Division.

While supply is down, "demand has skyrocketed," creating more pressure for parents and providers, Johns said.

Attendance at the two childcare centers Allison Morton owns was down by 20% at the start of the year but returned to pre-pandemic capacity levels in April, after she heard from more parents interested in enrolling their children.

She is planning to increase capacity by 30 slots in the fall and all those slots are already booked. The wait list of families in need of a spot is up to more than 200 families, up from the more typical length of about 60.

Some of the shortages may ease over the next several months as more providers enter the market or increase capacity, Johns said.

In the meantime, parents like Niculescu are hoping the hunt for childcare will line up with their job search. Niculescu and her husband managed to pay their bills on a single income over the past year thanks to a federal pause on student loan payments, but their budgets are feeling strained.

"It’s getting to be more challenging financially," said Niculescu. 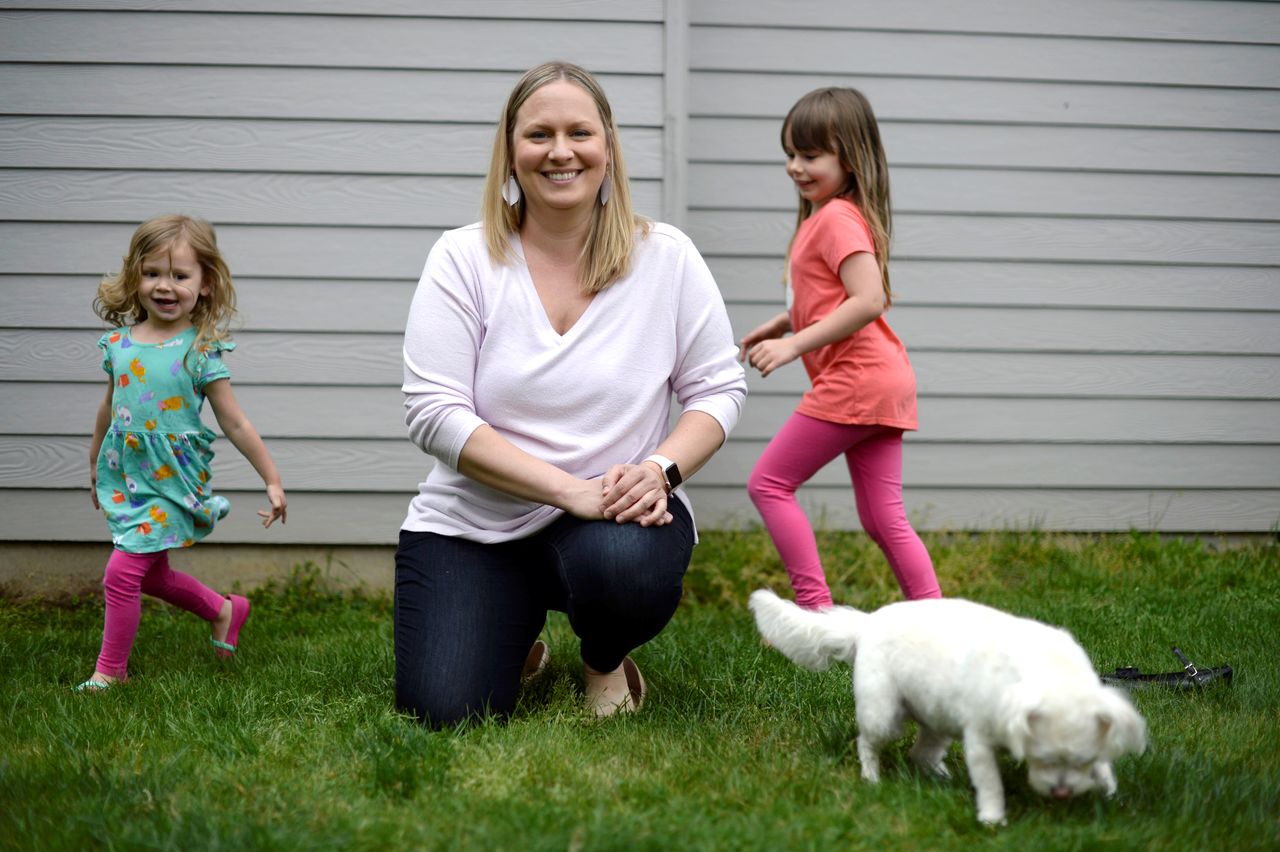 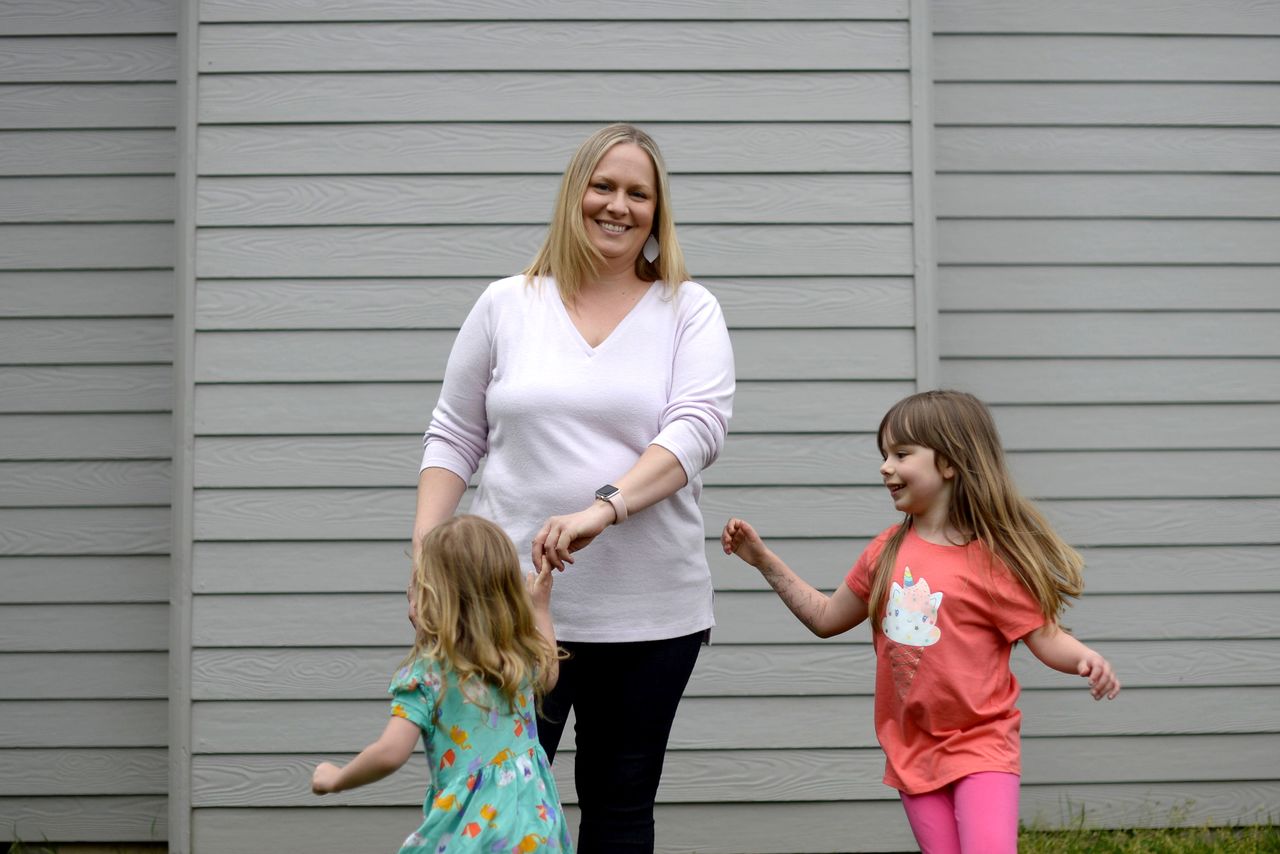 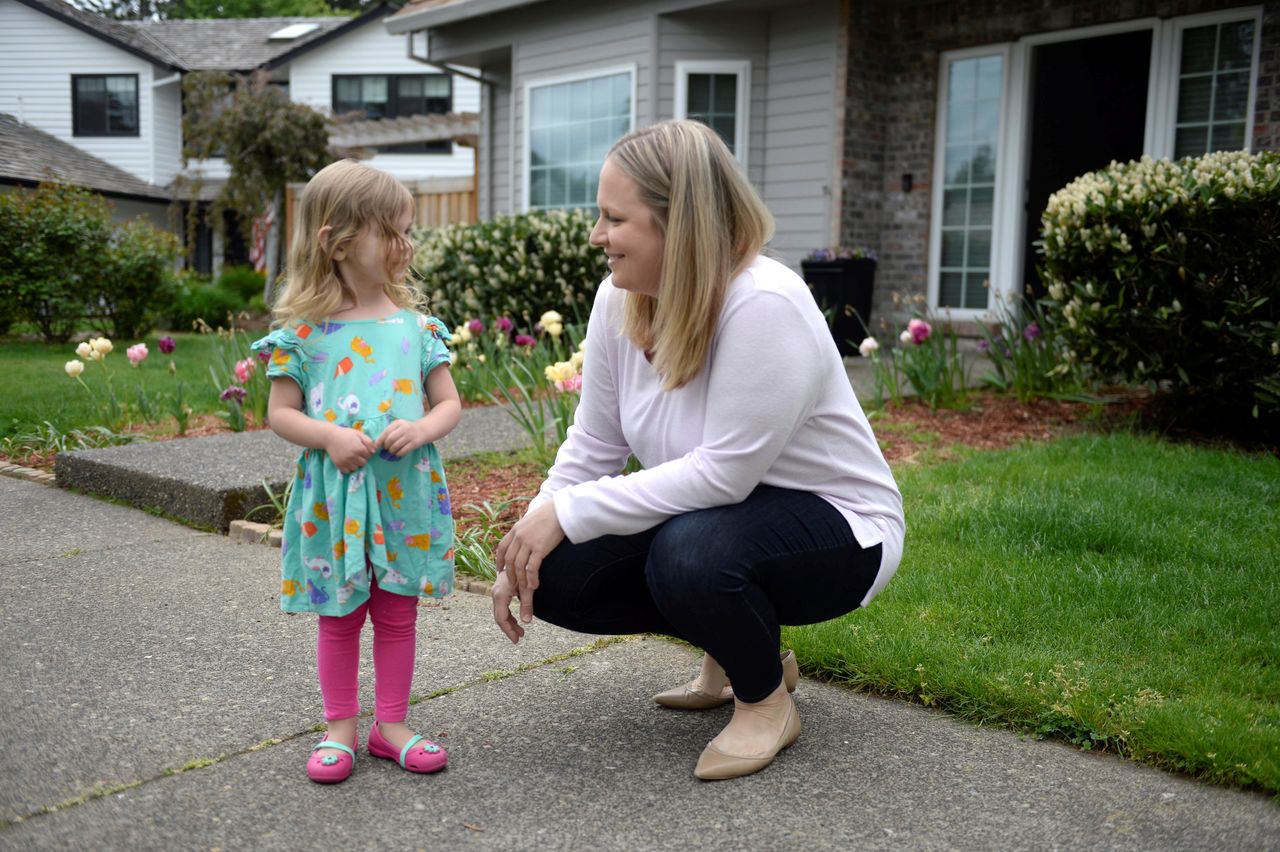 Mother of two, Wendy Niculescu, poses for a photo with her daughter Eleanor in Tualatin, Oregon, U.S., May 1, 2021. REUTERS/Amanda Lucier 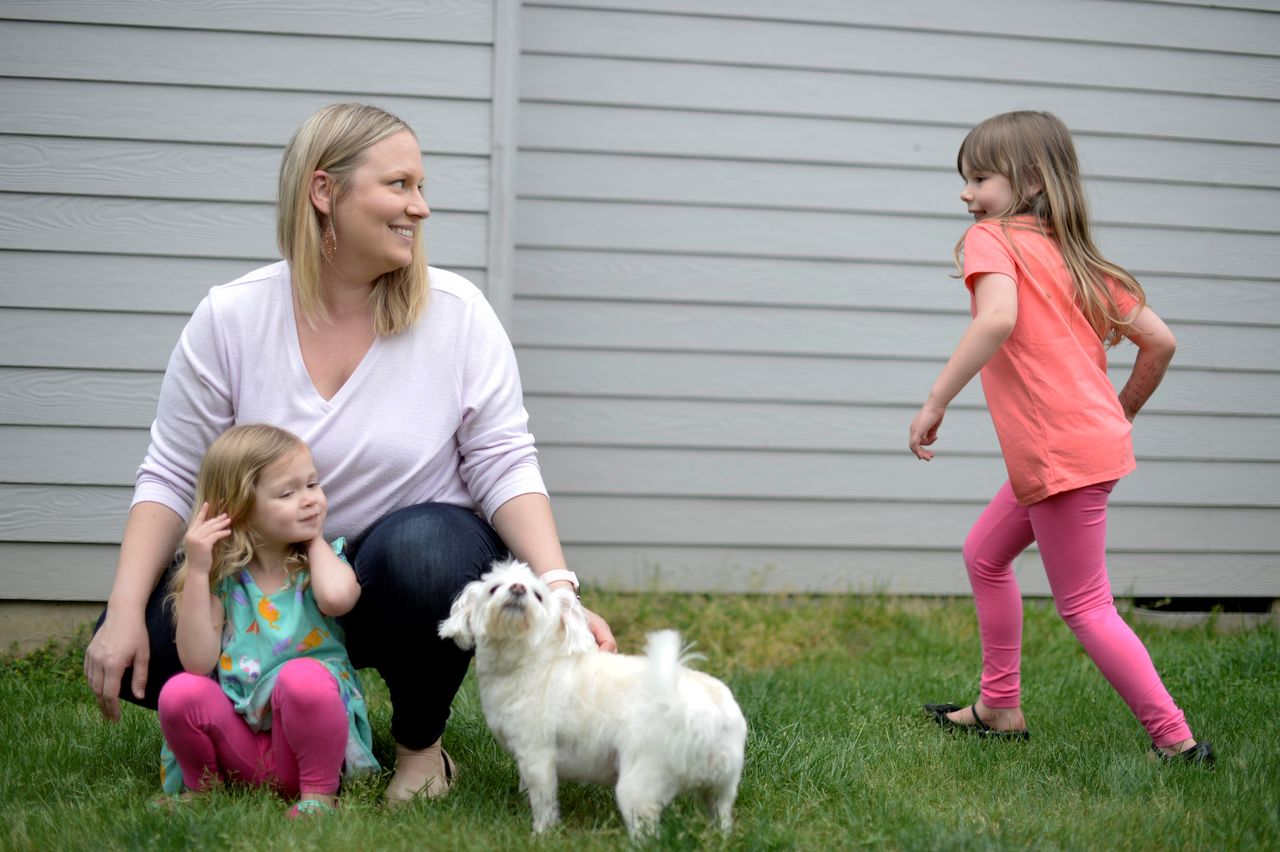 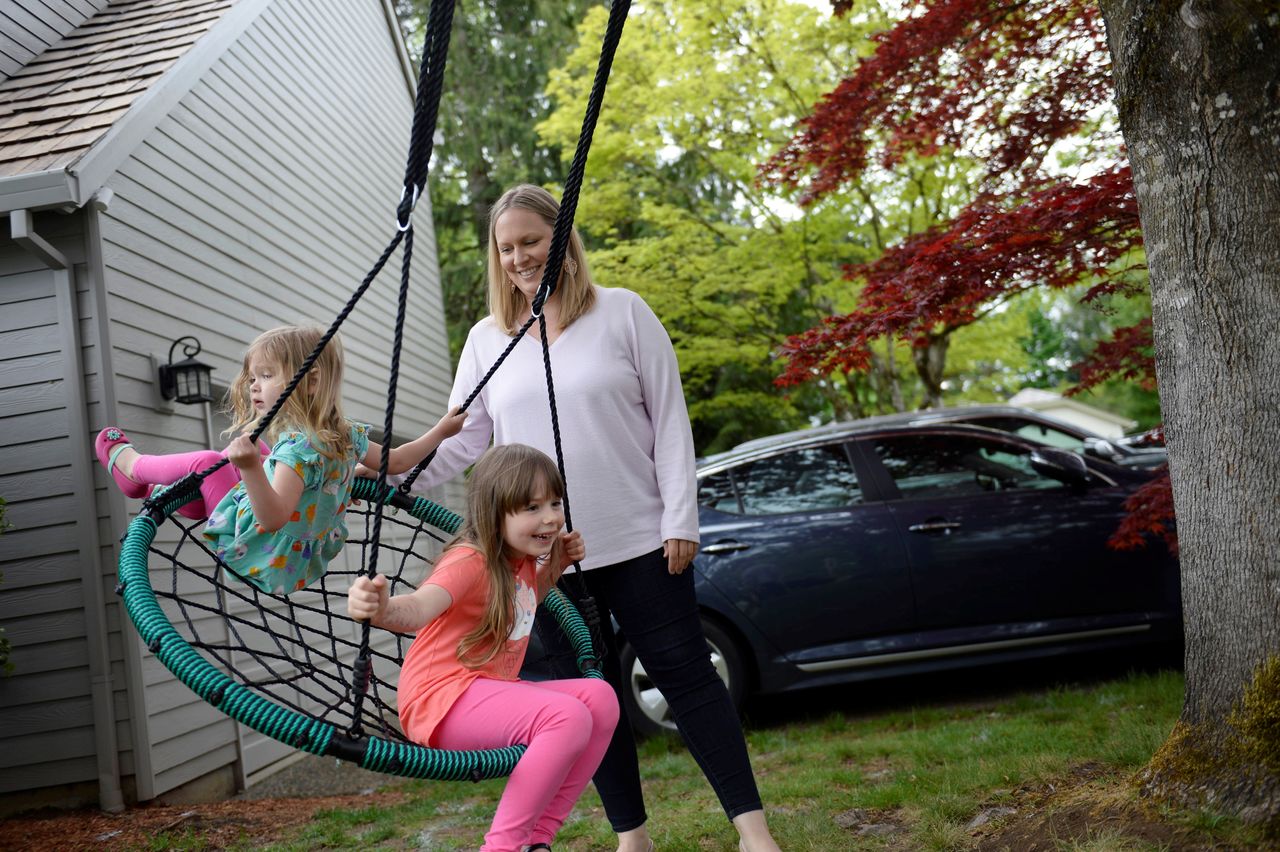 Mother of two, Wendy Niculescu, plays with her daughters Eleanor and Olivia, right in Tigard, Oregon, U.S., May 1, 2021. REUTERS/Amanda Lucier