TOKYO (Reuters) -Japan extended on Friday a state of emergency in Tokyo and three other areas until the end of May to stem a surge in coronavirus cases, but Prime Minister Yoshihide Suga reiterated that it is still possible to host Tokyo Olympics this summer.

The government had hoped a "short and powerful" state of emergency would contain a fourth wave of infection, but new cases in major cities such as Tokyo and Osaka are still at high levels, Suga said.

Extending the state of emergency to May 31 from May 11 will leave a margin of less than two months before the July 23 start of the Games, which were postponed last year because of the pandemic.

Responding to a question at a news conference about continued public unease about the Games, Suga reiterated his stance that Japan can host "a safe and secure Olympics" while following appropriate COVID-19 containment measures.

As of Friday, more than 230,000 people had signed a Japanese online petition calling for the Olympics to be cancelled.

"We are putting all our efforts into stemming the spread of infections," Suga said, after acknowledging that he was "aware" of concerns about the Games.

Suga said Olympics organisers were considering a series of measures that would protect the health and lives of the Japanese public.

Japan has not suffered as badly from pandemic as other countries but its vaccination campaign has been slow. So far only around 2% of the population of about 126 million has received at least one vaccine dose, according to Reuters data.

Suga promised to fast-track the government's inoculation efforts and said it aimed to administer 1 million shots a day. He did not give a timetable for this, but said he hoped to have all elderly people wanting to get shots inoculated by the end of July.

Osaka prefecture reported 1,005 new cases on Friday while Tokyo had 907. At one nursing home in Osaka, 61 residents were infected with the coronavirus and 14 died while waiting to be hospitalised, public broadcaster NHK reported.

Under the extended state of emergency, bars, restaurants, karaoke parlours and other places serving alcohol will remain closed, although large commercial facilities can re-open under shorter hours. Hard-hit Tokyo and Osaka will continue to keep these larger facilities closed.

The government also placed Aichi prefecture, home to Toyota Motor Corp, and Fukuoka prefecture in the southwest under a state of emergency - joining Tokyo, Osaka, Hyogo and Kyoto, where current measures began on April 25.

The northern island of Hokkaido and two other prefectures were added to regions under a "quasi state of emergency," now totalling eight of the 47 prefectures.

Think tanks forecast more pain for the economy ahead.

Dai-ichi Life said household consumption in the six prefectures covered by the state of emergency accounts for about 38% of the total.

Tokyo 2020 President Seiko Hashimoto repeated on Friday that a decision on domestic spectators at the Games will be made by June. Foreign spectators have been banned.

Upcoming test events for the Olympics, including an athletics event at the weekend, will not be affected by the extension of the state of emergency. The diving World Cup, which featured more than 200 athletes from 50 countries, was held in Tokyo this past week under the current state of emergency.

But Fukuoka prefecture cancelled the Olympic torch relay scheduled for May 11 and 12 and is instead planning an alternative event in which torchbearers will pass the flame to each other, a prefectural official said. 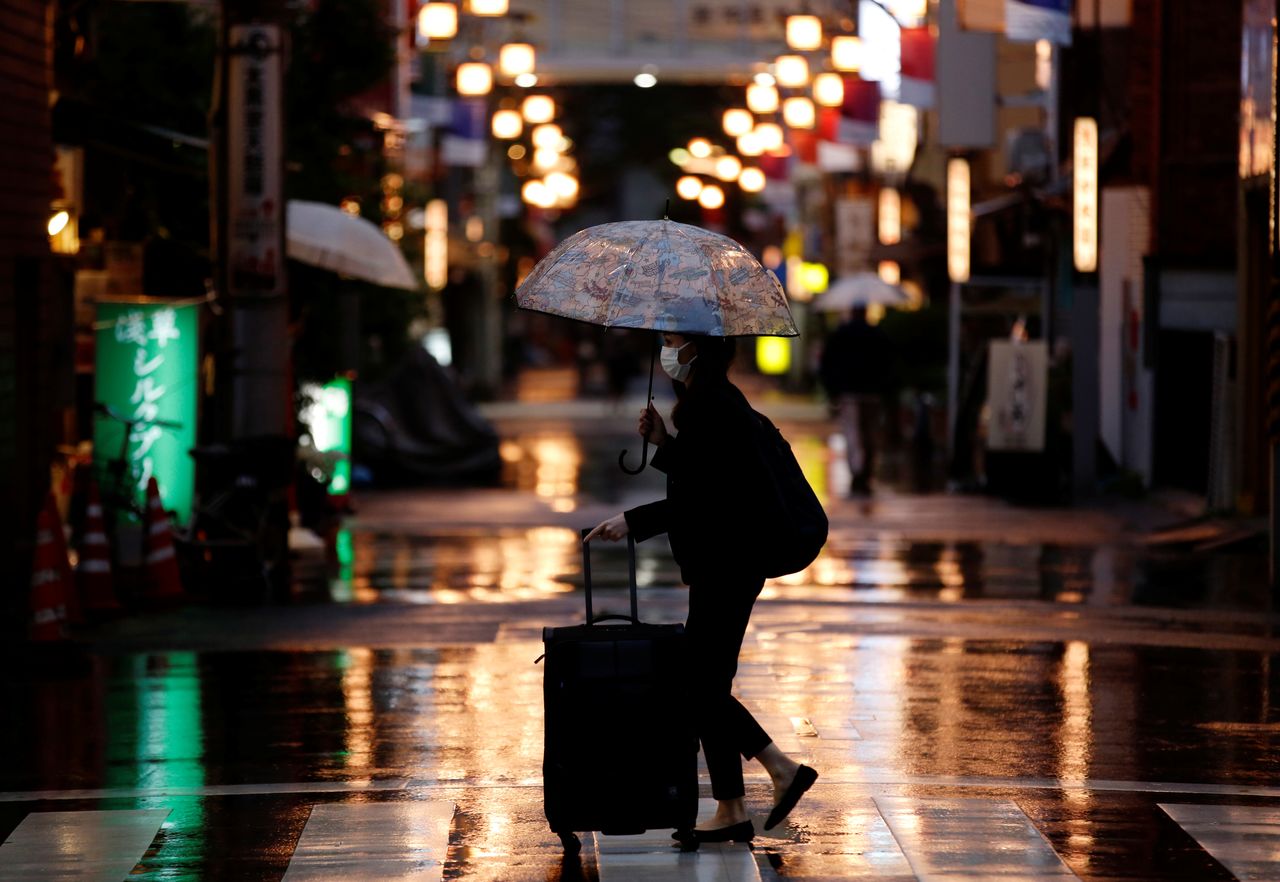 A woman wearing a protective face mask, amid the coronavirus disease (COVID-19) pandemic, walks in a local shopping street in Tokyo, Japan, May 7, 2021. REUTERS/Kim Kyung-Hoon 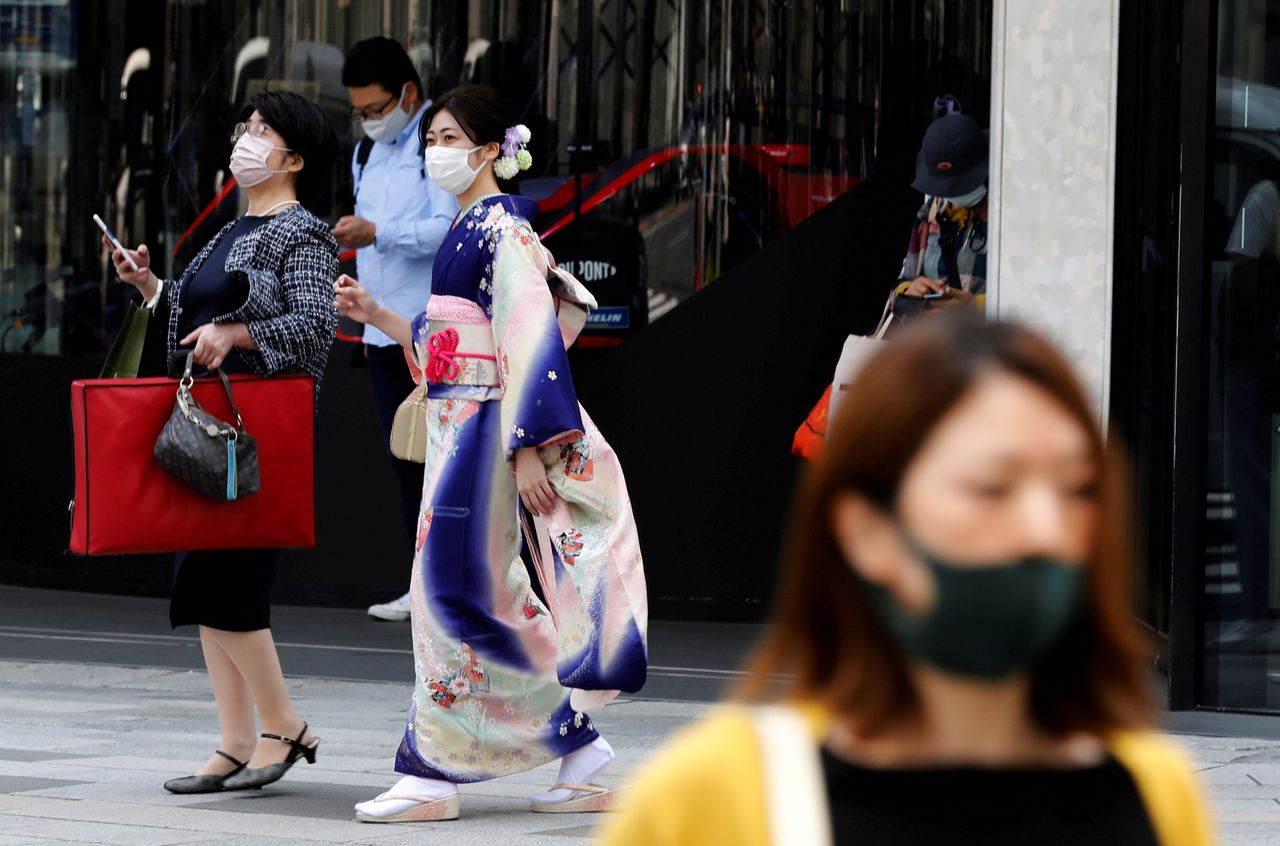 FILE PHOTO: A woman in kimono clad and pedestrians wearing protective face masks, make their way at a shopping district on the first day of the country's third state of emergency, amid the coronavirus disease (COVID-19) outbreak, in Tokyo, Japan, April 25, 2021. REUTERS/Kim Kyung-Hoon/File Photo 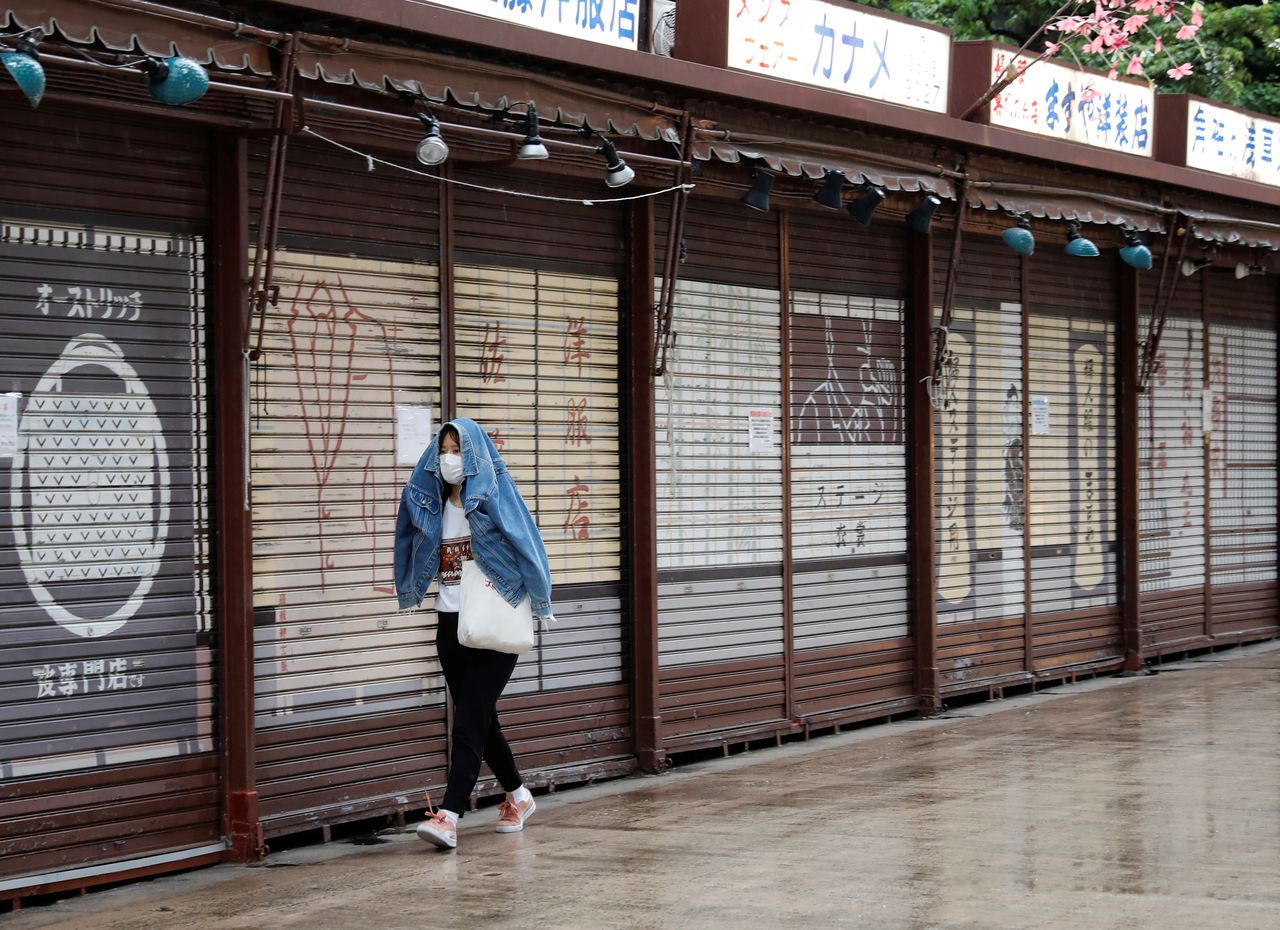 A woman wearing a protective face mask, amid the coronavirus disease (COVID-19) pandemic, walks past closed shops in Asakusa district in Tokyo, Japan, May 7, 2021. REUTERS/Kim Kyung-Hoon 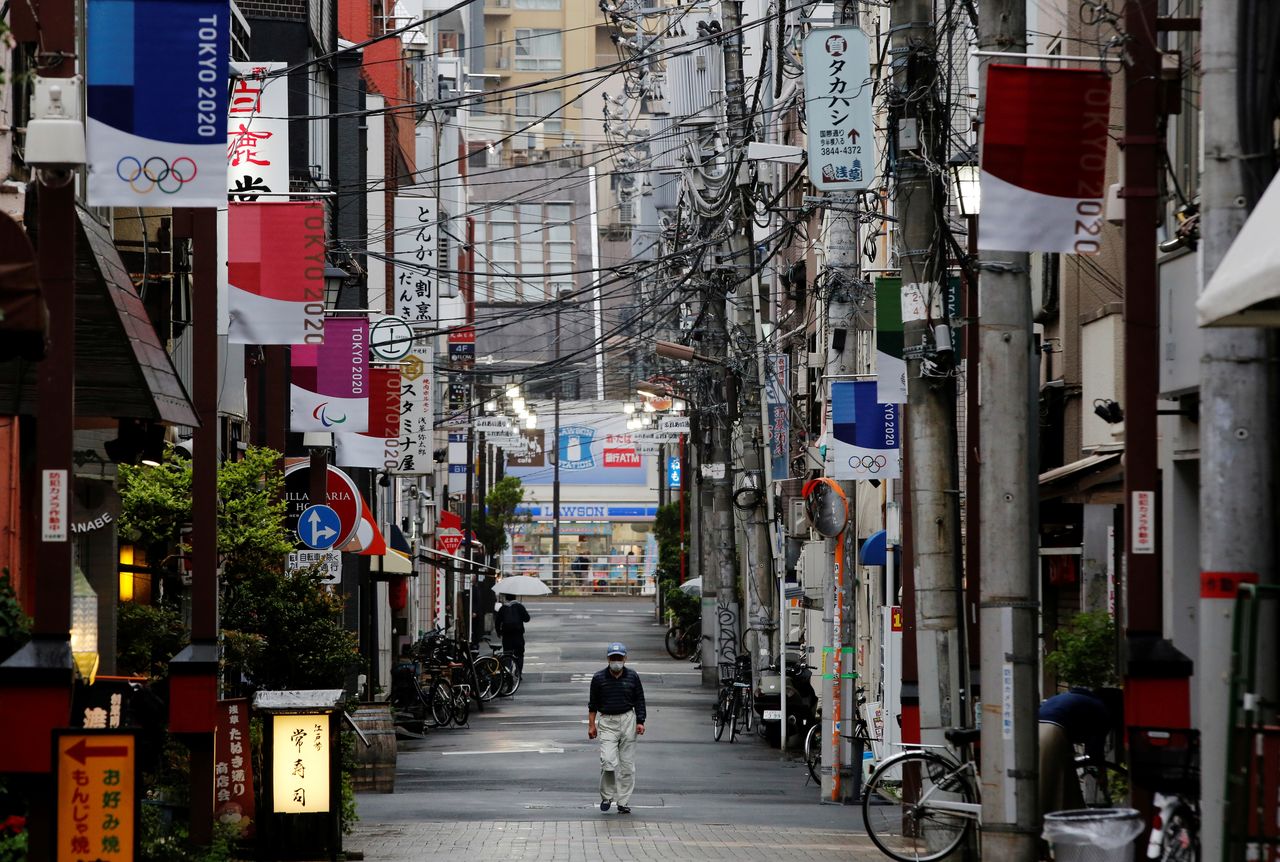 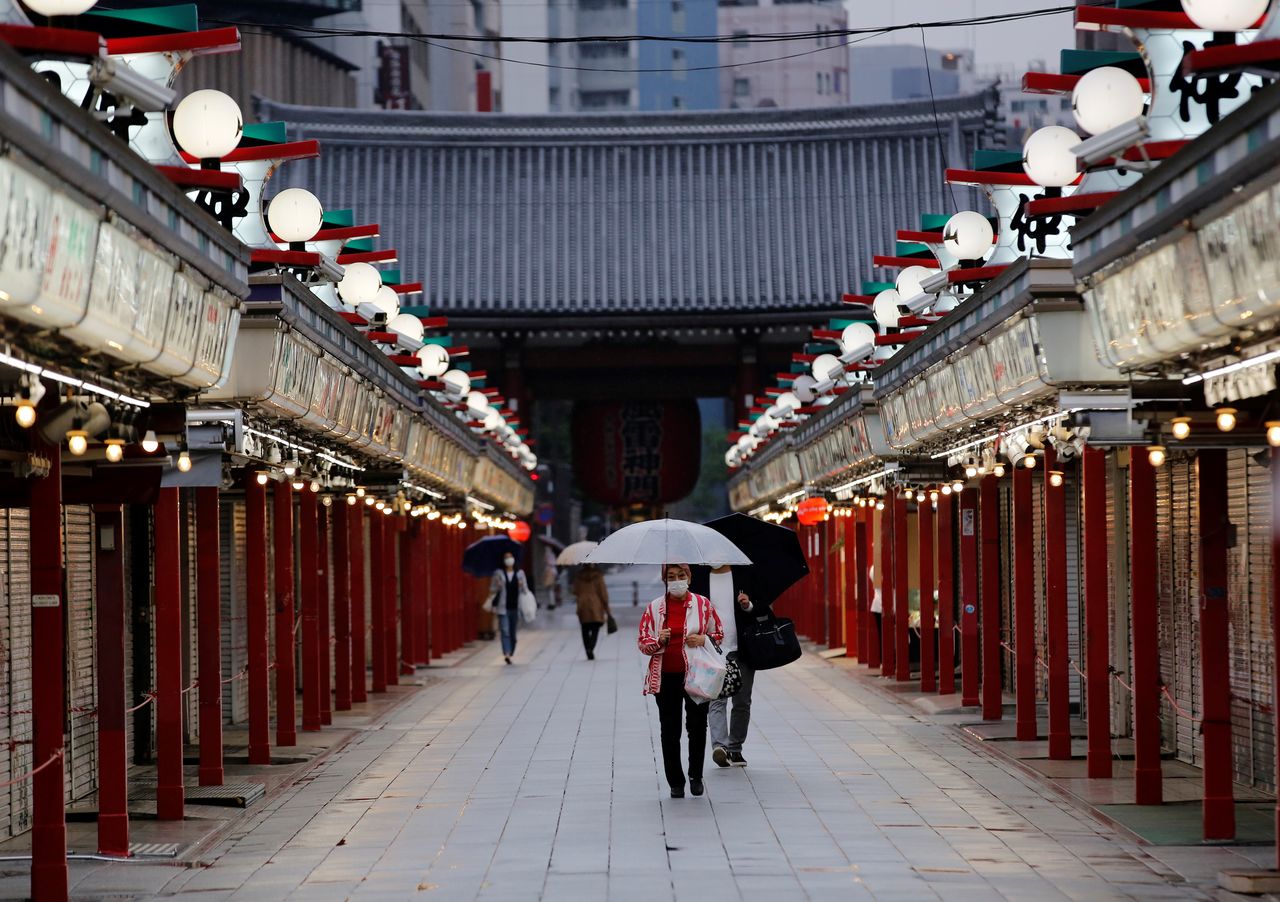