Take Five: Spring is (finally) in the air 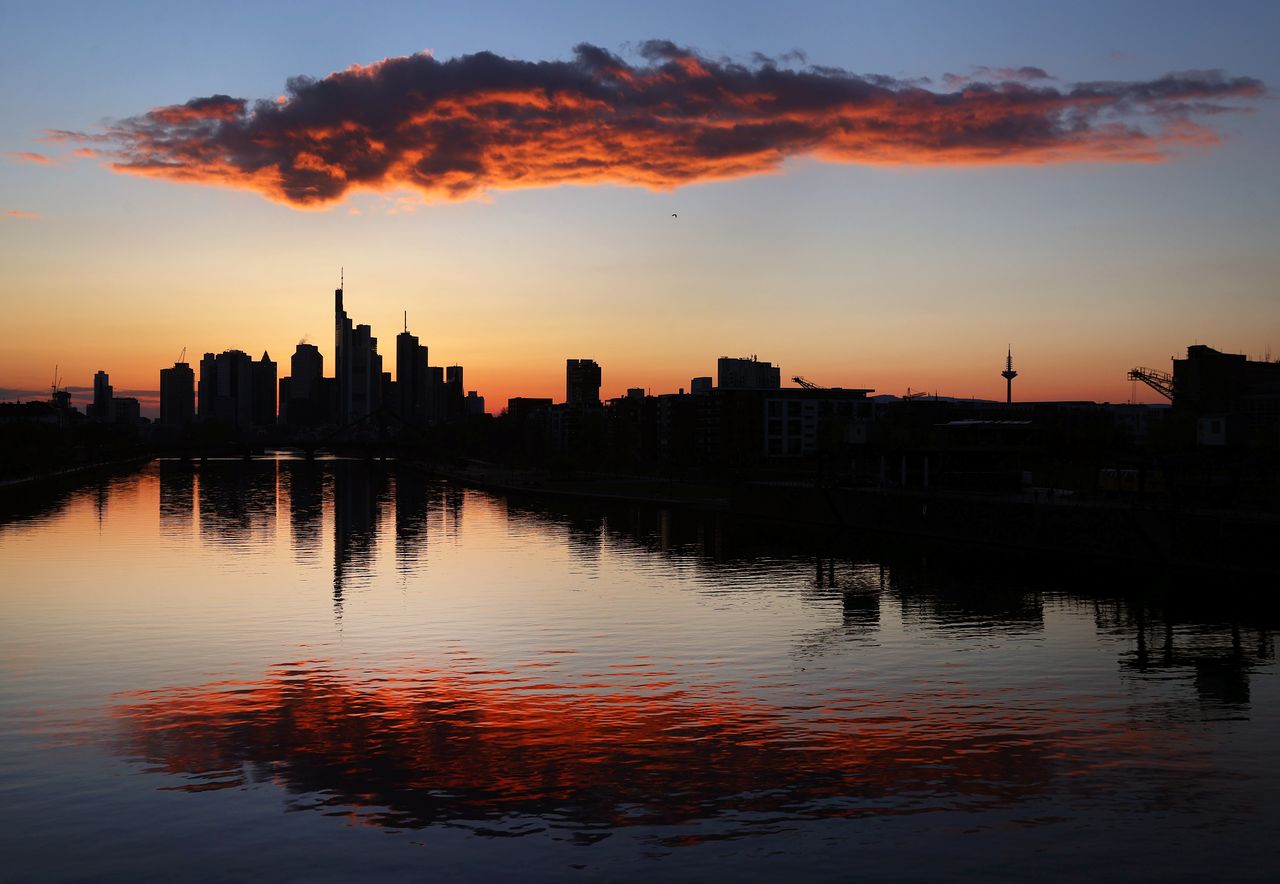 FILE PHOTO: The skyline with its financial district is photographed during sunset as the spread of the coronavirus disease (COVID-19) continues in Frankfurt, Germany, April 12, 2021. REUTERS/Kai Pfaffenbach

After weeks of COVID-19 lockdowns, a reopening of European economies is close, and boosting sentiment. Tuesday's German ZEW sentiment survey could confirm a brightening outlook.

Germany eases curbs on those fully vaccinated or recovered from COVID-19. France starts relaxing a night curfew and allowing restaurants to offer outside service from May 19.

After a slow start, the EU is expected to meet its target of delivering first vaccine doses to 70% of adults by end-summer, the euro zone should get to 50% in June. That's good news for tourism-dependent economies. Brussels' recommendation to ease restrictions on some countries and travellers is putting a spring in the step of British airline stocks too.

Britain will allow international travel to resume from May 17 after months of banning most trips abroad, but nearly all major destinations were left off its list of countries open for quarantine-free holidays.

Global equities are down after three months of gains. But markets aren't far off record highs and price falls may reflect a setback for tech mega-caps rather than a wholesale exit from stocks. And with real bond yields deeply negative, a selloff should be short-lived.

Yet tailwinds are weakening. The first quarter likely marked the peak of the U.S. growth and earnings rebound. Deutsche Bank predicts a 10% correction in stocks, saying markets fall each time the ISM survey retreats from a peak - which it has just done.

The liquidity tide too is ebbing. Most central banks are not yet unwinding money-printing or raising rates but money supply growth has shrunk. And just how transitory will inflation be? As May progresses, these questions won't go away.

-BUZZ-Correction is coming in semiconductor stocks

Investors will watch the U.S. Treasury's debt auctions for signs that demand remains steady after a yield surge roiled markets in the first quarter and fanned concerns that higher borrowing costs could hurt stocks, particularly growth sectors like technology.

The Federal Reserve's asset purchase schedule too is due on May 13. The Fed kept Treasury purchases unchanged at $80 billion per month for mid-April to mid-May period.

While global investors focus on inflation, in China it's credit that's the most likely source of pressure for policymakers. Data on both due in coming days could shape Beijing's outlook, with inflation seen pretty subdued while loan growth will probably chug along.

The politburo recently emphasised steady-as-she-goes policy, but made notable mention of the need to dampen housing speculation and of the government's role in managing financial risks - possibly clues as to areas that might see reform or tightening.

That comes after a wobbly few months in its debt markets, with defaults at state-owned firms in November and trouble at bad-loan giant Huarong rattling confidence in recent weeks. There's no sense yet of a 2018-style de-leveraging push, but authorities might be looking to tap the brakes if loans leap.

Bitcoin hogged the crypto-currency limelight earlier this year, doubling in price before recently losing steam. Now it's the turn of smaller rivals - the "altcoins" - to have their moment in the sun.

The second-largest coin, ethereum, hit a record $3,560 recently fuelled by its use in a bond issue and the booming NFT sector. Meme-based digital coin Dogecoin, originally intended as a satire on the cryptocurrency boom, also hit an all-time high. Their rise knocked bitcoin's share of the $2.4 trillion crypto market to a near-two year low.

Meanwhile Dogecoin lost more than a third of its price on Sunday, after Tesla chief and cryptocurrency supporter Elon Musk called it a "hustle" during his guest-host spot on the "Saturday Night Live" comedy sketch TV show.

The Tesla Techno-king Elon Musk's social media comments have in the past sent bitcoin and Dogecoin soaring.