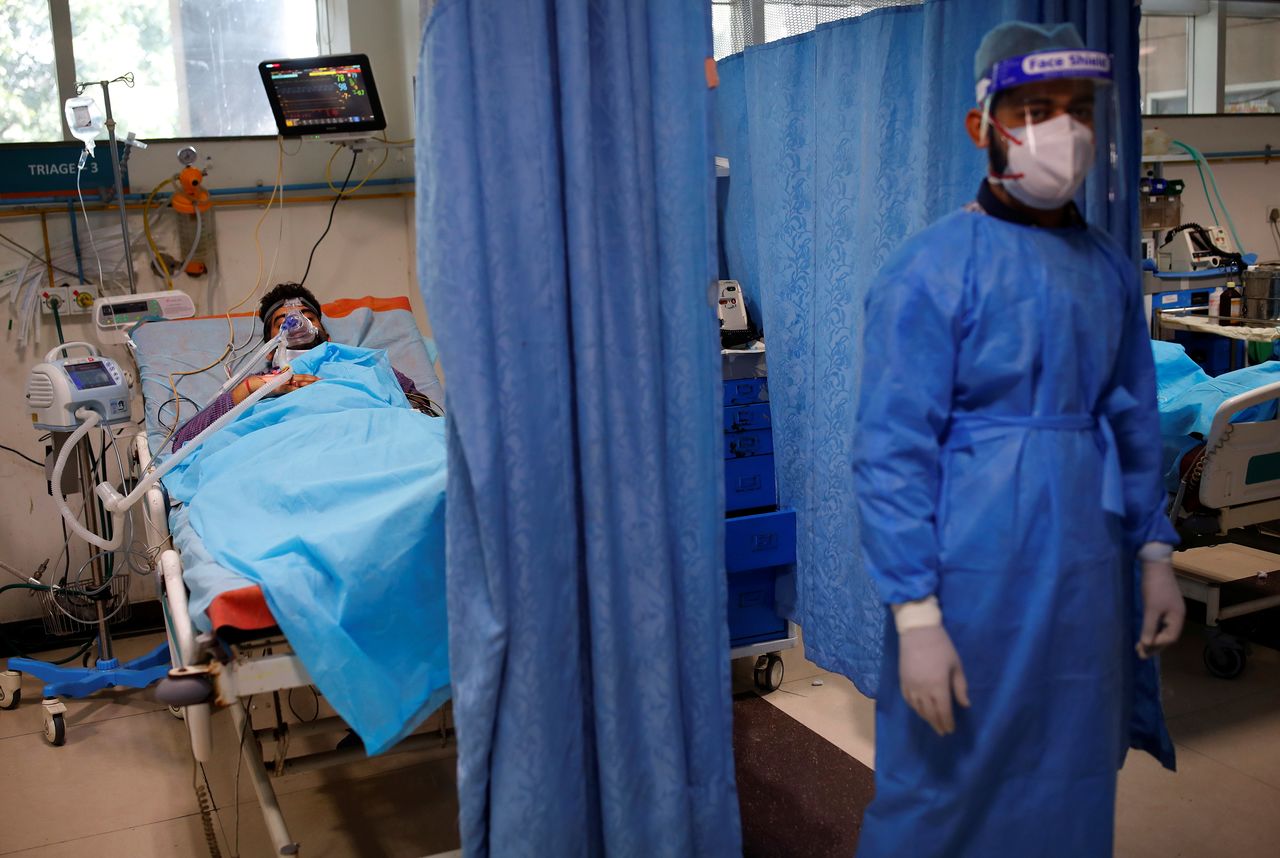 A man suffering from coronavirus disease (COVID-19) receives treatment as a Syringe Infusion Pump, donated by France is seen next to his bed, inside the emergency room of Safdarjung Hospital in New Delhi, India, May 7, 2021. REUTERS/Adnan Abidi

Calls grew for India to impose a nationwide lockdown as new coronavirus cases and deaths held close to record highs on Monday, increasing pressure on the government of Prime Minister Narendra Modi.

As many hospitals grapple with an acute shortage of oxygen and beds while morgues and crematoriums overflow, experts have said India's actual figures could be far higher than reported.

British Prime Minister Boris Johnson will set out on Monday the next phase of lockdown easing in England, giving the green light to "cautious hugging" and allowing pubs to serve customers pints inside after months of strict measures.

Aided by one of the fastest vaccine rollouts in the world, Britain's daily case and death numbers have dropped sharply - reporting just two fatalities on Sunday - enabling it to emerge from a lockdown imposed in January to tackle a second wave.

Japanese Prime Minister Yoshihide Suga said on Monday that he has never "put the Olympics first", as an opinion poll showed nearly 60% of people in Japan want the Games cancelled less than 11 weeks before they are due to open.

Japan has extended a state of emergency in Tokyo and three other areas until the end of May and is struggling to contain a surge in cases, raising more questions about whether the Games should go ahead. Its vaccination rate is the lowest among wealthy nations.

International Olympic officials, Tokyo planners and Suga himself have insisted the Games will go on in "a safe and secure" way. Foreign spectators will not be allowed and planners issued an elaborate set of rules last month aimed at preventing infections.

Taiwan to quarantine pilots of its largest airline

Taiwan will quarantine all pilots for its largest carrier China Airlines for 14 days as it tries to stop an outbreak of COVID-19, the health minister said on Monday, impacting a lifeline for the island's trade-dependent economy.

Taiwan has generally kept the pandemic under control due to early prevention with only sporadic domestic cases, but since last month it has been dealing with an outbreak linked to China Airlines pilots and an airport hotel where many of them stayed. There have been 35 confirmed infections in the outbreak.

Health authorities believe some of the pilots got infected overseas, then spread the infection upon returning to Taiwan, and that others could have been infected by pilots from other airlines staying at the same hotel.

South African President Cyril Ramaphosa said on Monday that if wealthy nations hogged COVID-19 shots while millions in poor countries died waiting for them it would amount to "vaccine apartheid".

South Africa and India have been pushing for a waiver on some intellectual property rights for vaccines and medicines at the World Trade Organization.

U.S. President Joe Biden backed the proposal last week, though it may still take months to reach a deal.