(Reuters) -A number of tenants of a high-end office block in Myanmar that the United Nations said is built on military-owned land have moved out or are reviewing their leases, including McKinsey, Coca-Cola and Reuters, the companies said.

Activist group Justice for Myanmar last month called on commercial tenants of the Sule Square complex of offices and shops in the heart of Myanmar's commercial hub of Yangon to stop indirectly supporting the army.

"Sule Square has big-name tenants that continue to lease office space in the building, indirectly supporting the army," Justice for Myanmar said in a report in which it identified 18 of the tenants.

Reuters approached all of the companies named in the report. Of the seven that said they had moved or were reviewing office plans, two cited the military link. Others cited various reasons including business prospects.

Business has collapsed in the Southeast Asian country since a Feb. 1 coup that prompted widespread protests and strikes, during which the army has killed hundreds of civilians and arrested thousands.

Opened in 2017 near the historic Sule Pagoda, Sule Square was developed by a local affiliate of Hong Kong listed Shangri-La Asia, which also manages the building and an adjacent hotel.

The site was leased from the military, according to a 2019 fact-finding mission established by the United Nations to investigate the army's economic interests, media and human rights groups.

As the basis for its conclusion that the land is owned by the military, the mission in its report cited what it called digital records. One of the authors of the report, human rights consultant Chris Sidoti, said the material had been archived and was not immediately available.

On Tuesday, Reuters made a request to the United Nations to get access to the records.

Shangri-La, which said in 2017 it had invested $125 million in the development, declined to comment on Reuters' questions about land ownership.

A spokesman for Myanmar's junta did not answer calls seeking comment. Reuters could not independently verify details of the land lease deal.

Myanmar's military, which directly ruled for almost 50 years after taking power in a 1962 coup, owns large tracts of land and controls conglomerates that span everything from mining to banking.

McKinsey & Company terminated its lease of serviced office space in Sule Square in early 2021, said Melissa Yeo, director of reputation and communications, Southeast Asia, at the consultancy, without elaborating.

In an emailed statement, Coca-Cola said it would not be renewing its lease when it ends in mid-June citing "changing business requirements".

When contacted for comment, a spokesperson for Reuters, which was not one of the companies named in the report, said it is not currently using its Sule Square office and was reviewing its tenancy. The spokesperson did not comment on the building's possible military ties.

Singapore-based private equity firm Emerging Markets Investment Advisors said it had moved out of Sule Square after its lease ended in March, while Norwegian fertiliser firm Yara said it had started looking for alternative office space.

Of the companies that said they had moved or were reviewing office space, only Yara and Telenor cited the military ownership.

"We have only recently been made aware that the landlord is owned by a company who pays land lease to the military," said Josiane Kremer, director, external relations at Yara.

She did not elaborate on how Yara became aware of the ownership details.

Norwegian state-owned telecoms firm Telenor said it had been aware of the military-owned land under Sule Square before it moved in but it had picked the location due to factors such as safety. It did not elaborate on how it became aware of the ownership.

Telenor spokesman Tormod Sandstoe said in an email to Reuters on Wednesday that the firm "was looking at alternatives to Sule Square".

The World Bank, which also has an office in Sule Square, said it was "assessing the situation in Myanmar, according to internal policies and procedures". It did not elaborate on its plans.

Japan's Sony Corp said it previously had a representative in Myanmar but its office had closed "due to the local situation" and it now sold only through distributors.

Several other groups named in Justice for Myanmar's report, including the American Chamber of Commerce in Myanmar and British insurer Prudential either did not respond to a request for comment or declined to comment.

The University of Reading and Mastercard were named in the Justice for Myanmar report but told Reuters they did not rent offices in Sule Square. Reuters could not independently confirm that. 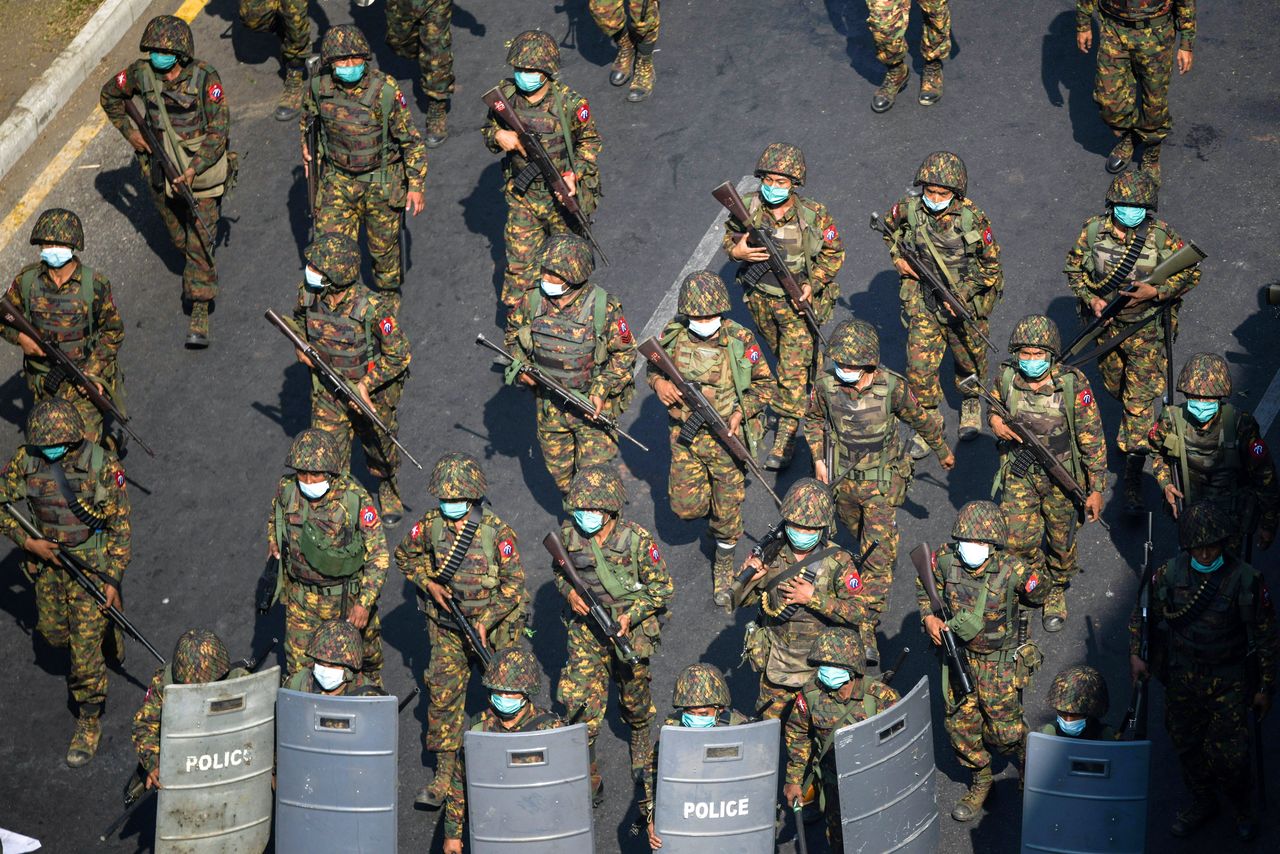 FILE PHOTO: Myanmar soldiers walk along a street during a protest against the military coup in Yangon, Myanmar, February 28, 2021. REUTERS/Stringer 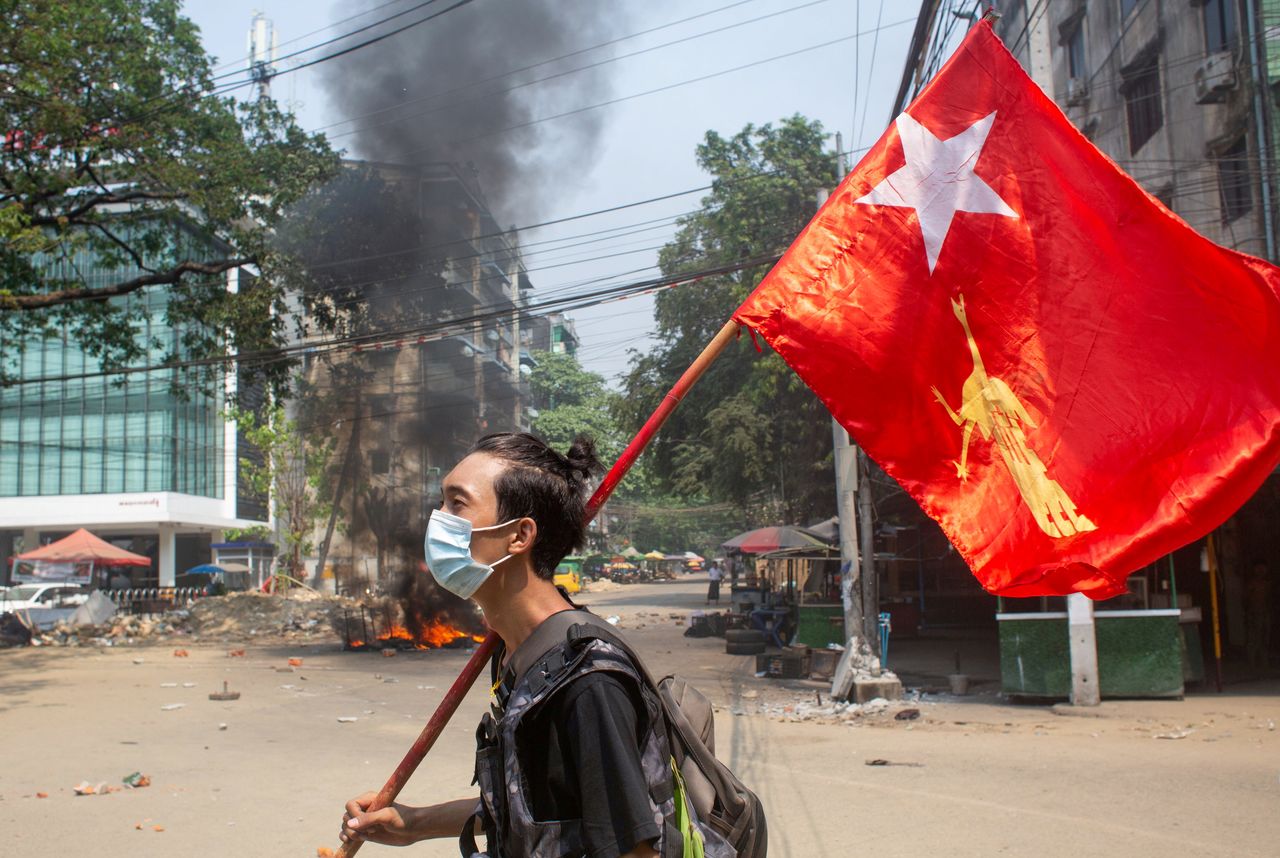 FILE PHOTO: A man holds a National League for Democracy (NLD) flag during a protest against the military coup, in Yangon, Myanmar March 27, 2021. REUTERS/Stringer