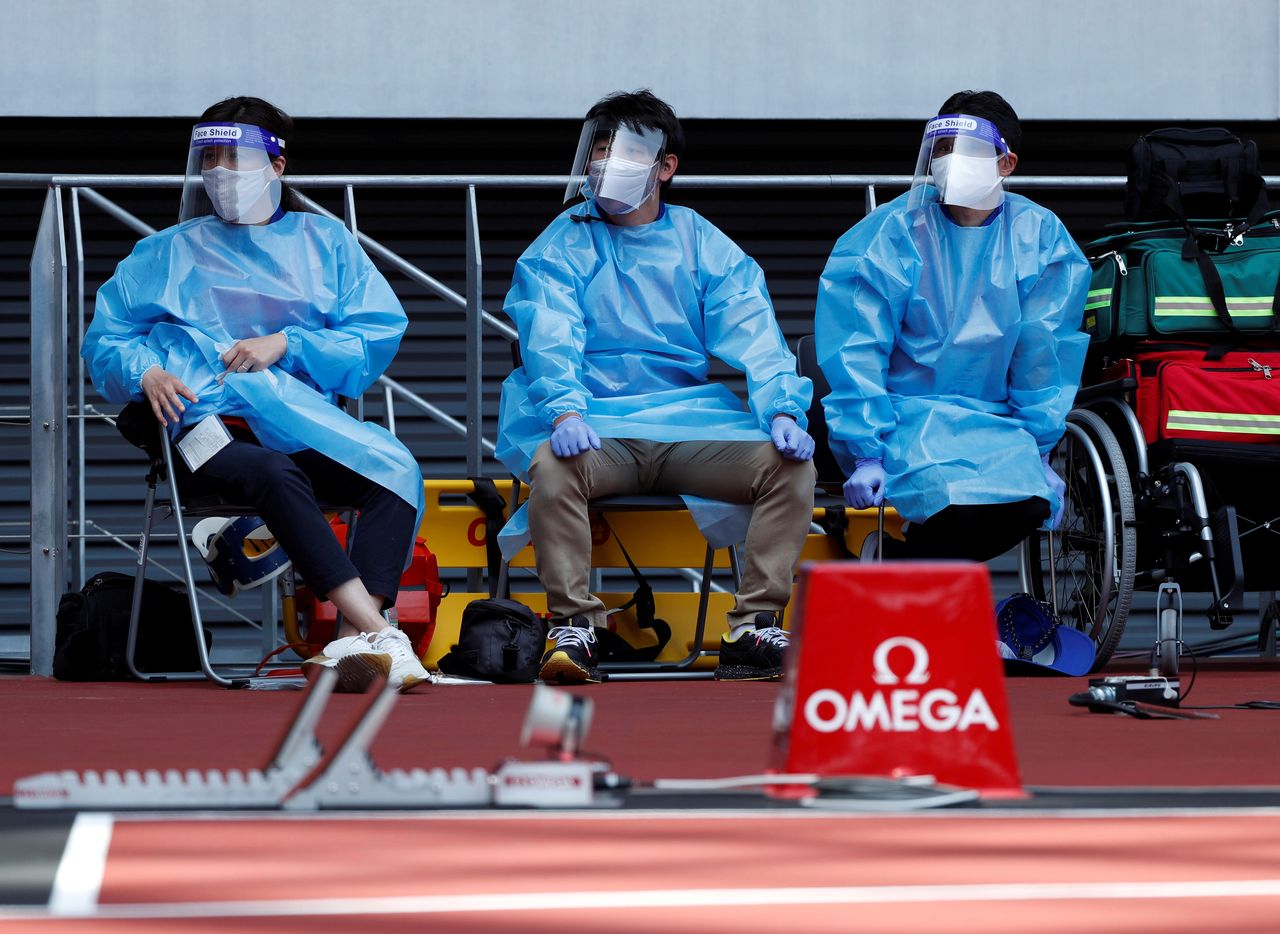 By Eimi Yamamitsu and Ju-min Park

TOKYO (Reuters) -Dozens of Japanese towns have abandoned plans to host Olympic athletes because of concern they will overburden stretched medical resources amid a fourth wave of coronavirus infections, the Nikkei newspaper reported on Thursday.

Forty of more than 500 towns registered to welcome international competitors had decided not to accept athletes for training camps and cultural exchanges before the global sporting showpiece, the newspaper reported, citing a government source.

The reluctance of some towns to host visiting athletes, normally a source of pride for communities outside the host city, is the latest sign of deep unease in Japan over the scheduling of the Games in the middle of a pandemic.

The Tokyo 2020 Olympic Games were postponed last year and are scheduled to take place from July 23 to Aug. 8 despite a surge in infections and a state of emergency in the host city.

Other regions scheduled to host athletes have also been hard hit, including the eastern prefecture of Chiba, where the U.S. track and field team had been due to have a training camp. The prefecture reported on Wednesday that the team had cancelled those plans.

Chiba Governor Toshihito Kumagai said the prefecture would not guarantee hospital beds for athletes as they should not be given preferential treatment.

"Chiba prefecture is not thinking about securing scarce hospital beds ... for athletes and people involved in the Olympic Games in a way that would prohibit our residents from using them,” Kumagai told reporters.

Shiro Hasegawa, an official in Okuizumo town, said it was no longer possible to host India's hockey team for pre-Games training as planned.

"There's limited time and cost issues and it is impossible to have exchange activities between residents and athletes," he told Reuters.

Overseas athletes will also not participate in a test event for the Olympics BMX freestyle cycling, the Yomiuri newspaper said.

Some municipalities have expressed concern about how Japan's medical system would cope if the Games turned into a superspreader event, concerns shared by Japan's top medical adviser.

"It is extremely important to evaluate how much medical care will be burdened," medical adviser Shigeru Omi told lawmakers on Thursday, repeating concern he has raised since April.

The International Olympic Committee said on Wednesday it was confident the Olympics would be a historic event.

But public opposition to the Games is growing as Japan struggles to contain new infections that are pushing medical resources to the brink.

A union of about 100 doctors called on Thursday for the government to cancel Games, saying that the health system faced collapse if they went ahead.

Some high-profile Japanese athletes are also questioning whether the Games should be held during a pandemic.

"Japan is seeing a lot of new infections now and is going through a tough time, so I can't imagine just blindly pushing the Olympics forward," Matsuyama said at a news conference.

The government has been criticised for not locking down hard enough and bungling the vaccine rollout. Only 2.8% of the population has been inoculated, the lowest rate among wealthy countries.

To forestall a virus outbreak during the event, Japan is preparing to offer vaccinations to about 2,500 Olympic and Paralympic athletes and support staff, using donated shots.

Japan reported more than 7,000 new infections on Wednesday, with 969 cases in Tokyo.

A record 712 daily coronavirus cases were confirmed on Thursday in the northern prefecture of Hokkaido where the Olympic marathon will take place, according to the government.