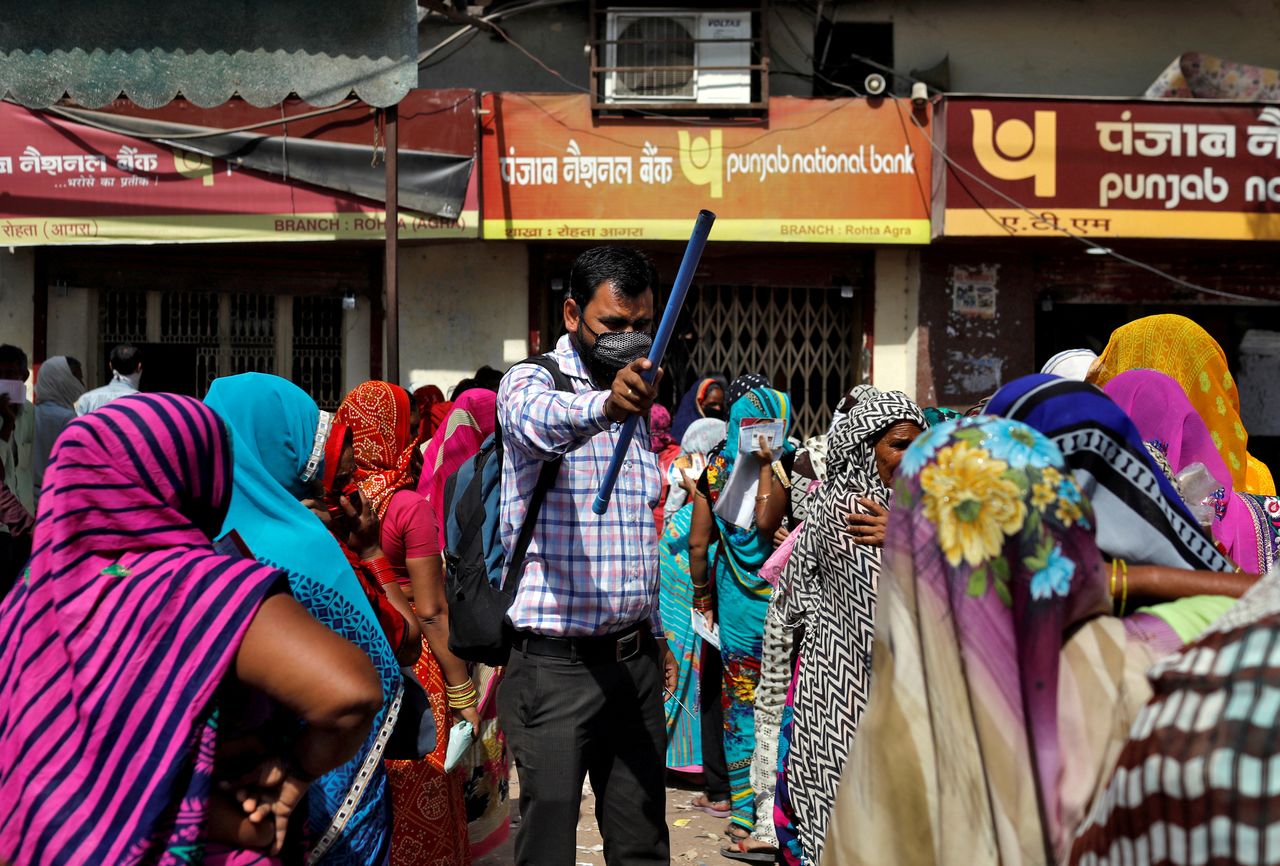 FILE PHOTO: A bank employee maintains order as customers wait in lines to enter a bank during a 21-day nationwide lockdown to slow the spreading of coronavirus disease (COVID-19) in Agra, India, April 7, 2020. REUTERS/Danish Siddiqui

LONDON (Reuters) - India's devastating COVID-19 crisis is making investors question more than ever whether after years of debt accumulation and patchy progress on reforms, a country touted as a future economic superpower still deserves its 'investment grade' status.

A spate of downgrades last year had already left India's investment grade credit ratings hanging by a thread and the severity of the current virus wave is making the main agencies, S&P, Moody's and Fitch agitated again.

All three firms have either cut - or warned they could cut - the country's growth forecasts in recent weeks and that government debt as a share of GDP will jump to a record 90% this year.

In that respect though, the world's second most populous country has long been an anomaly.

The median debt level for countries Fitch has in the BBB bracket - India is BBB- - and on a downgrade warning with both Fitch and Moody's - is currently around 55% and only 70% even for those languishing at the lowest depths of 'junk' grade.

With COVID-19 pushing up debt almost everywhere and the ratings firms signalling they will wait for this latest wave to ease before any judgements, investors who buy rating-sensitive assets like bonds are making their own calls.

"We still see India as investment grade," said NN Investment Partners' head of Asian Debt, Joep Huntjens, who thinks the country's economy will bounce back quickly. "But we do think there is at least a 50/50 chance that at least one rating agency downgrades, probably next year".

With calls growing for another national lockdown to tackle the new virus surge, plenty of others are wary too.

JPMorgan says rating agencies are making "a leap of faith" by holding fire at the moment. M&G's Eldar Vakhitov says his firm's models have been flagging a downgrade, while UBS points out India will soon have the third highest debt level among big emerging markets after junk-rated Brazil and Argentina.

UBS analysts also estimate India needs to grow at least 10% a year for public debt to stabilise and come down. It hasn't got anywhere near that since 1988, World Bank data shows. Last year's full lockdown saw the economy contract 24% in the first quarter and Moody's said this week it expects growth to settle at around 6% longer term.

"We do see the risk that it (a downgrade) can definitely happen," said UBS's head of emerging market strategy Manik Narain. "It seems more a question of when rather than if".

For a graphic on India's sovereign credit rating:

ANOTHER BRIC TO FALL?

Neither India's finance ministry nor its central bank responded to requests to discuss the risk of a downgrade but, as Brazil and South Africa have experienced, becoming a ‘fallen angel’ - as a demotion to junk is known in rating agency parlance - can set off a wave of problems.

India's government debt is not yet in most of those indexes, so the big issue will be the roughly $40 billion to $45 billion worth of investment grade corporate debt that is also likely to get cut.

NN's Huntjens thinks around 90% of Indian IG corporates would be hit and while giants like Reliance might be spared, India's 7.4% share of JPMorgan's Asia Investment Grade Corporates Index means there would be plenty of selling.

For a graphic on India's weight in the JPMorgan CEMBI corporate bond index:

If a cut does come, it wouldn't be the first time India has lost investment grade status. It was first stripped in 1991 just a year after getting its initial S&P rating as a balance of payments crisis hit.

A repeat now though would be a chastening moment for its nationalist leader Narendra Modi who rallies supporters on promises to advance India on the world stage and compete with the likes of China.

While it has built up a healthy stock of currency reserves, its huge population of 1.4 billion means it still has the lowest prosperity level of any investment grade country when measured by GDP per capita of $2,164. China's figure is nearly $13,000.

"A debt-to-GDP ratio of 90% is certainly a matter of great concern and these things cannot go on," Garg said. "But the fundamental view about India is that it is not a basket case, it is a strong economy."

"In the end the debt levels need to come down and that can only happen if growth remains strong," NN's Huntjens added. "And it can't just be based on (government)stimulus because then the debt just rises even higher".

For a graphic on India's economy was sledgehammered by first COVID wave: