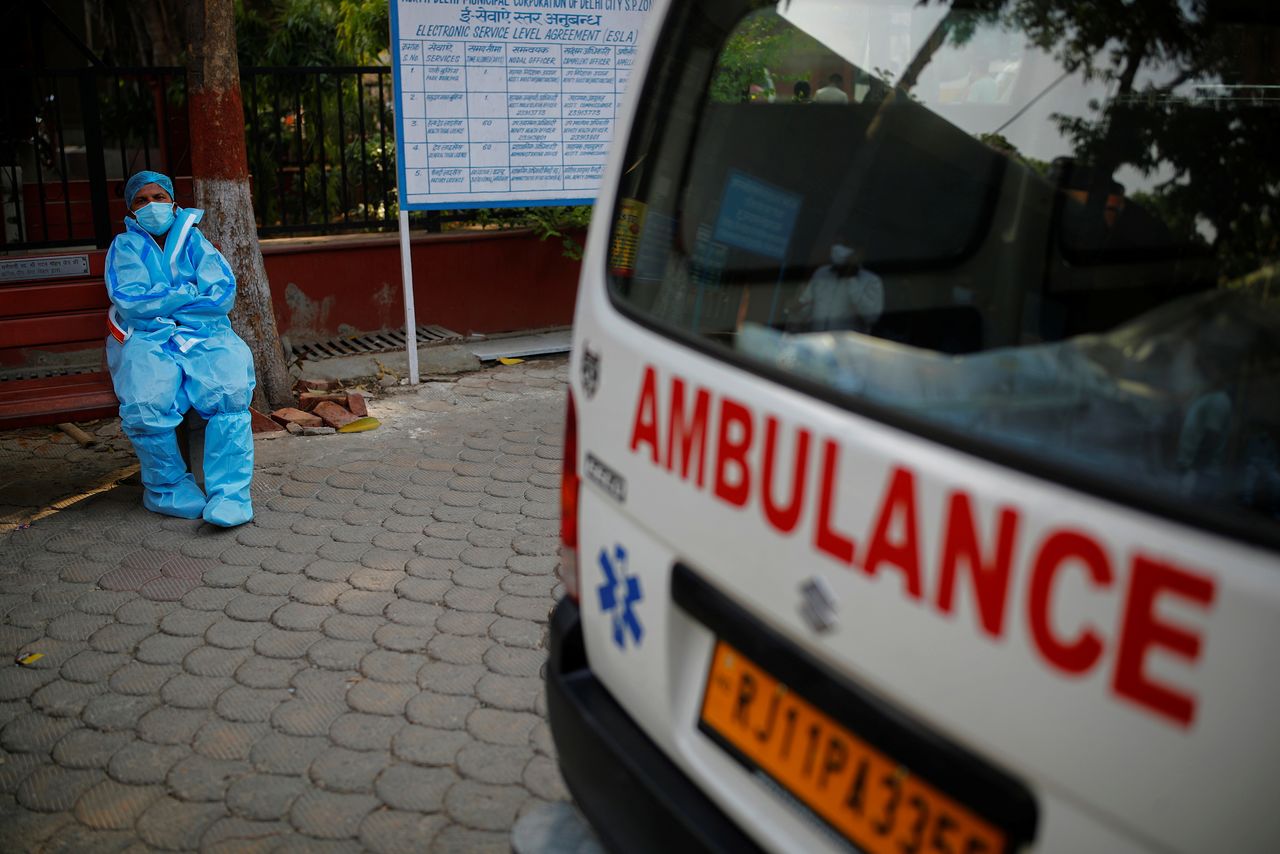 FILE PHOTO: A health worker rests as he sits next to his ambulance carrying a dead body of a victim who died due to the coronavirus disease (COVID-19), at a crematorium in New Delhi, India, May 10, 2021. REUTERS/Adnan Abidi

BENGALURU (Reuters) - At least two Indian states have said they plan to dose their populations with the anti-parasitic drug ivermectin to protect against severe COVID-19 infections as their hospitals are overrun with patients in critical condition.

The move by the coastal state of Goa and northern state of Uttarakhand, come despite the World Health Organization and others warning against such measures.

"The current evidence on the use of ivermectin to treat COVID-19 patients is inconclusive," WHO said in a statement in late March. "Until more data is available, WHO recommends that the drug only be used within clinical trials."

Merck, a manufacturer of the drug, has also said available data does not support using the drug as a COVID-19 treatment.

"We do not have enough data to support its use," said Anita Mathew, an infectious diseases expert in Mumbai.

The state of Goa, a major tourist haven, said earlier this week it plans to give ivermectin to all those older than 18, while the Himalayan state of Uttarakhand announced plans on Wednesday to distribute the tablets to any person over the age of two, except for pregnant and lactating women.

"An expert medical panel has recommended this" Uttarakhand's Chief Secretary Om Prakash told Reuters. "We are waiting for supplies to come in. Once they do we will distribute this drug."

Uttarakhand state in March and April played host to the Kumbh Mela, a weeks-long Hindu gathering that attracted millions of devotees from across the country. Images of the gathering showed scant evidence of any mask wearing or social distancing as throngs of people congregated for a holy dip in the river Ganges.

The state, ruled by Indian Prime Minister Narendra Modi's Bharatiya Janata Party, has since early April seen its COVID-19 cases surge from under 300 a day to above 7,000 a day and the death toll has also risen sharply.

Modi and other political leaders in India have faced sharp criticism for failing to stop big religious and political gatherings in many states, despite evidence from mid-February onward that India's case count was rising.

Despite India's overwhelming surge in cases, Modi has shied away from imposing a nationwide lockdown fearing the economic fallout and has left it to state governments, which experts say have acted too late.

Goa, which is also ruled by Modi's BJP, remains open to tourists and only imposed an extended 15-day lockdown this week, despite data showing more than one in three patients were testing positive for COVID-19 since mid-April. The state is reporting the highest positivity rates in the country.

Goa Health Minister Vishwajit Rane said an expert panel based in Europe had found the drug ivermectin reduced the time to recovery and risk of death, but regulators such as WHO and the U.S. Food and Drug Administration say there is little evidence of this.

The state-run Indian Council of Medical Research recommends doctors could use the drug for mild COVID-19 patients, but warns this is based on "low certainty of evidence".

Rane did not respond to a Reuters request for comment.