The museum's launch in a converted 19th-century commodities exchange, blocks away from the Louvre, was put on hold twice due to the coronavirus pandemic after having suffered earlier planning mishaps, with an initial project abandoned in 2005.

Pinault, 84 - who made his fortune in timber trading before shifting into retail under the group now known as Kering, run by his son - joins rival French luxury goods tycoon Bernard Arnault in trying to stamp his legacy on Paris' art scene and landscape, with museums and renovation projects.

But the Bourse de Commerce - Pinault Collection, opening on May 22, will also give visitors a glimpse of the businessman's vast trove of art purchases since the 1980s, including pieces by photographer Cindy Sherman and painter Peter Doig.

The 200 works on display for the opening, many straight out of storage, feature artists who have never had restrospectives in France, such Kerry James Marshall, known for his paintings of Black figures and explorations of African-American history.

An ephemeral work by Swiss-born artist Urs Fischer will take centre stage at the launch, with wax sculptures installed in the central space, including of chairs and a marble-like statue, set to slowly melt over six months as they are set alight.

Overhead, stuffed pigeons peer down into the gallery, in an art installation called "Others" by Maurizio Cattelan designed to give visitors a startling sense of being observed.

The project follows Pinault's attempt to build a new museum in western Paris on the site of a former Renault car factory, which became bogged down in wrangling with local authorities. The billionaire has since opened two museums in Venice, Italy.

Arnault, who is behind the LVMH luxury goods conglomerate, built his Louis Vuitton foundation in the west of the French capital, opening the futuristic ship-like Frank Gehry design to public exhibits in 2014.

The Cartier Foundation, linked to the jewellery brand owned by Switzerland's Richemont, has been a cultural hotspot for contemporary art exhibits in Paris since the 1980s.

Many museums in France are re-opening for the first time since October on May 19 as COVID-19 restrictions ease. The Bourse de Commerce - Pinault Collection will welcome 600-700 visitors a day, a reduced intake compared to its 1,700 capacity.

"Now it's a much more balanced art scene, it's a kind of ecosystem in which private and public can work together," Bethenod told Reuters.

Housed in a circular former grain trading hall, the Bourse de Commerce's exterior has been restored, while inside old and new mingle. A cement walkway imagined by Japanese architect Tadao Ando gives visitors a closer view of the imposing glass dome, as well as a late 19th-century painting depicting an antiquated Europe-centric world view, with colonial stereotypes.

Part of the concept was to keep the work, in a form of dialogue with contemporary artists, Bethenod said. 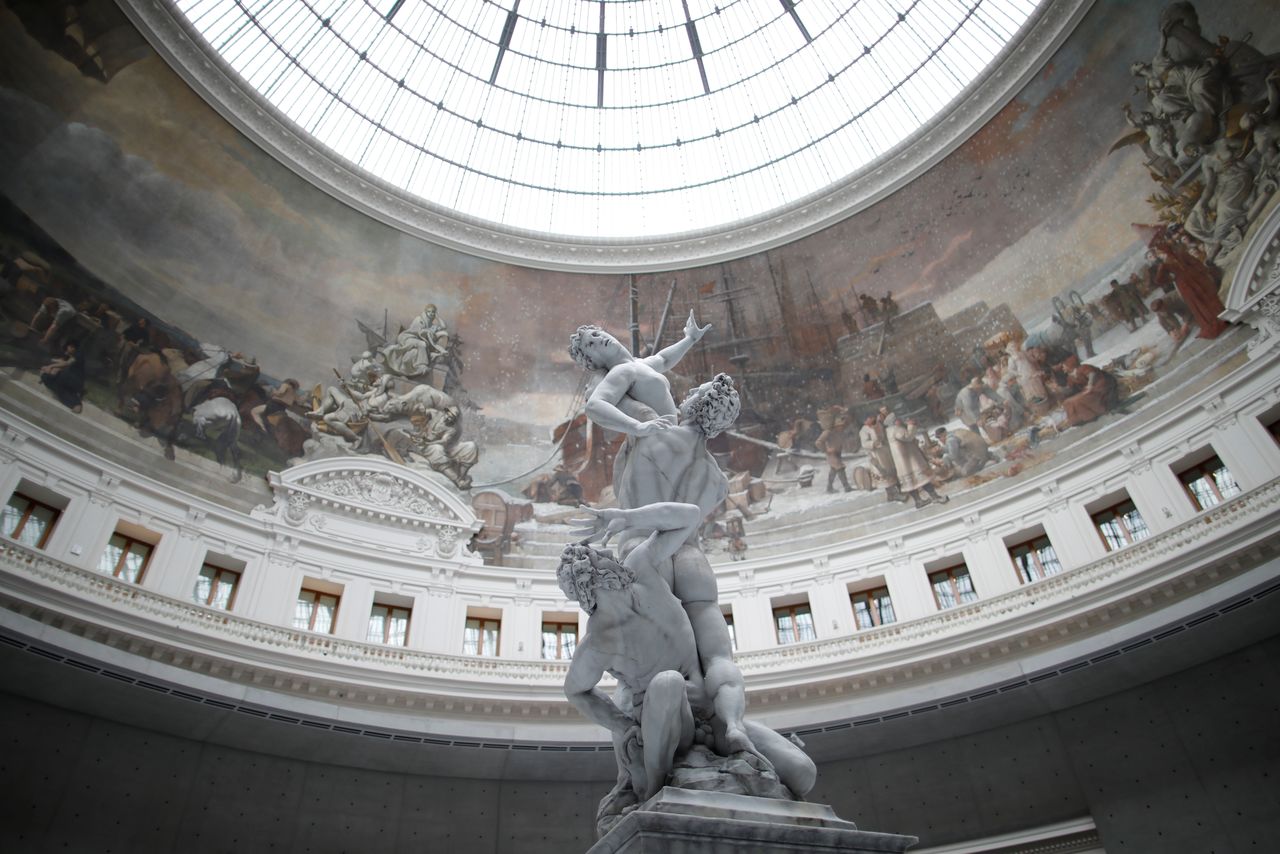 The wax pigmented sculpture, a life-sized replica of The Rape of the Sabine Women by Giambologna, part of the art installation "Untitled 2011-2020" by artist Urs Fischer is seen in the Rotonde at the Bourse de Commerce - Pinault Collection contemporary art museum in Paris, France, May 14, 2021. REUTERS/Sarah Meyssonnier 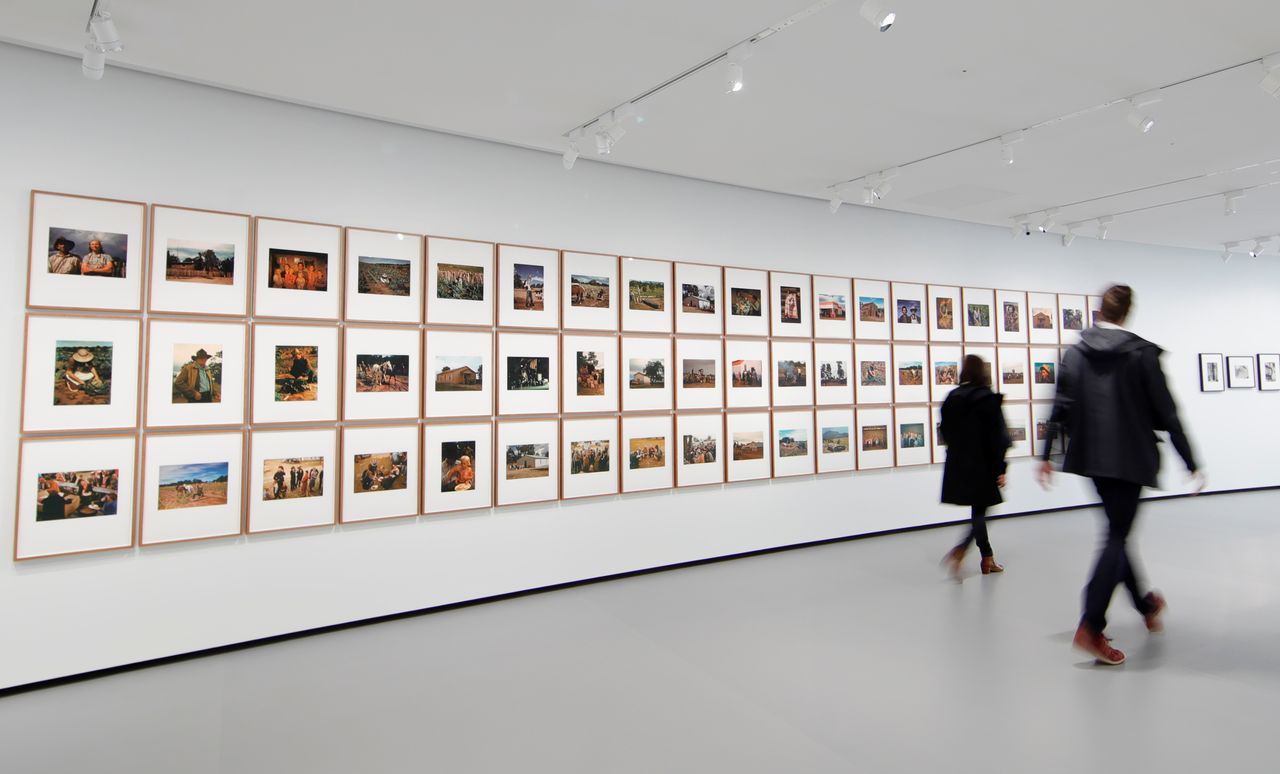 People walk past the installation of photographs by Sherrie Levine in Gallery 3, dedicated to photography, during a press visit at the Bourse de Commerce - Pinault Collection contemporary art museum in Paris, France, May 14, 2021. REUTERS/Sarah Meyssonnier 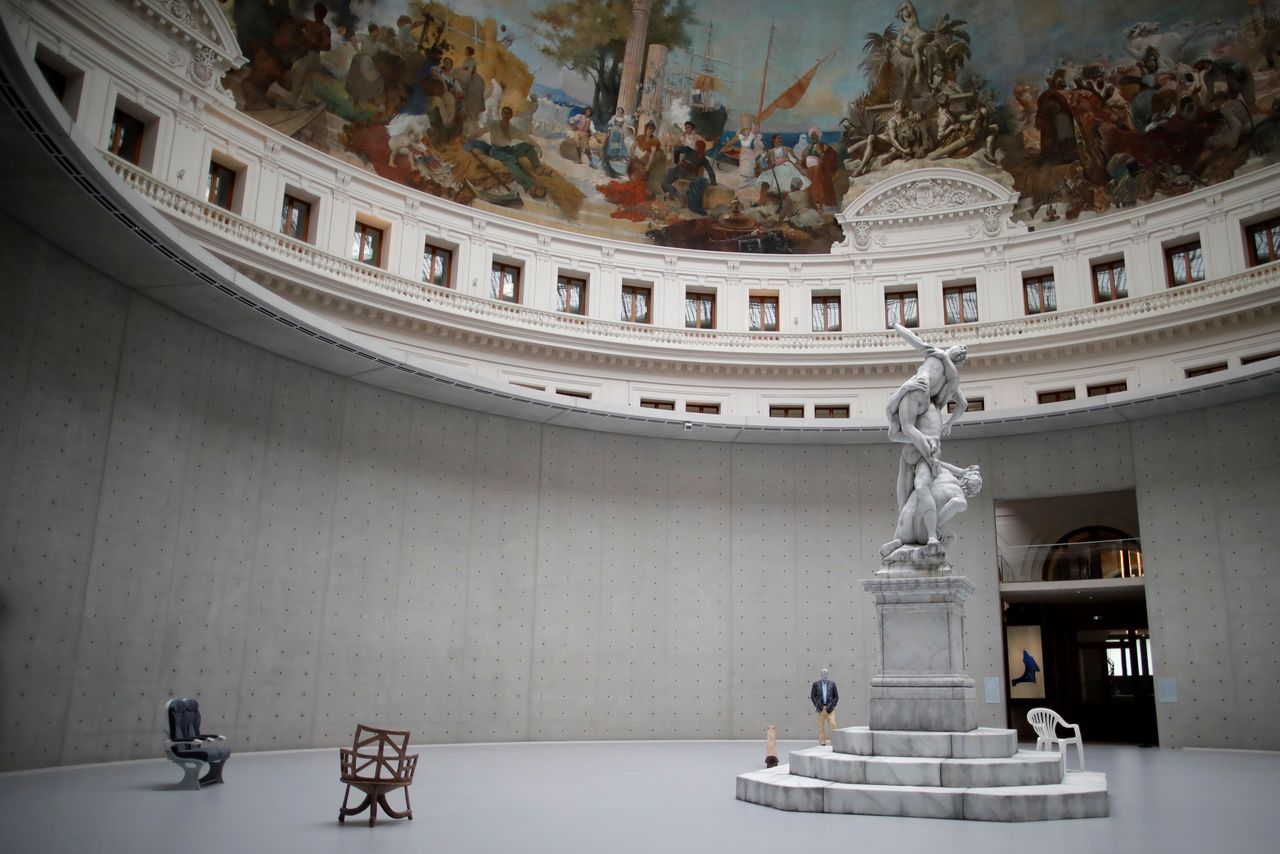 A view shows the art installation "Untitled 2011-2020" by artist Urs Fischer in the Rotonde at the Bourse de Commerce - Pinault Collection contemporary art museum in Paris, France, May 14, 2021. REUTERS/Sarah Meyssonnier 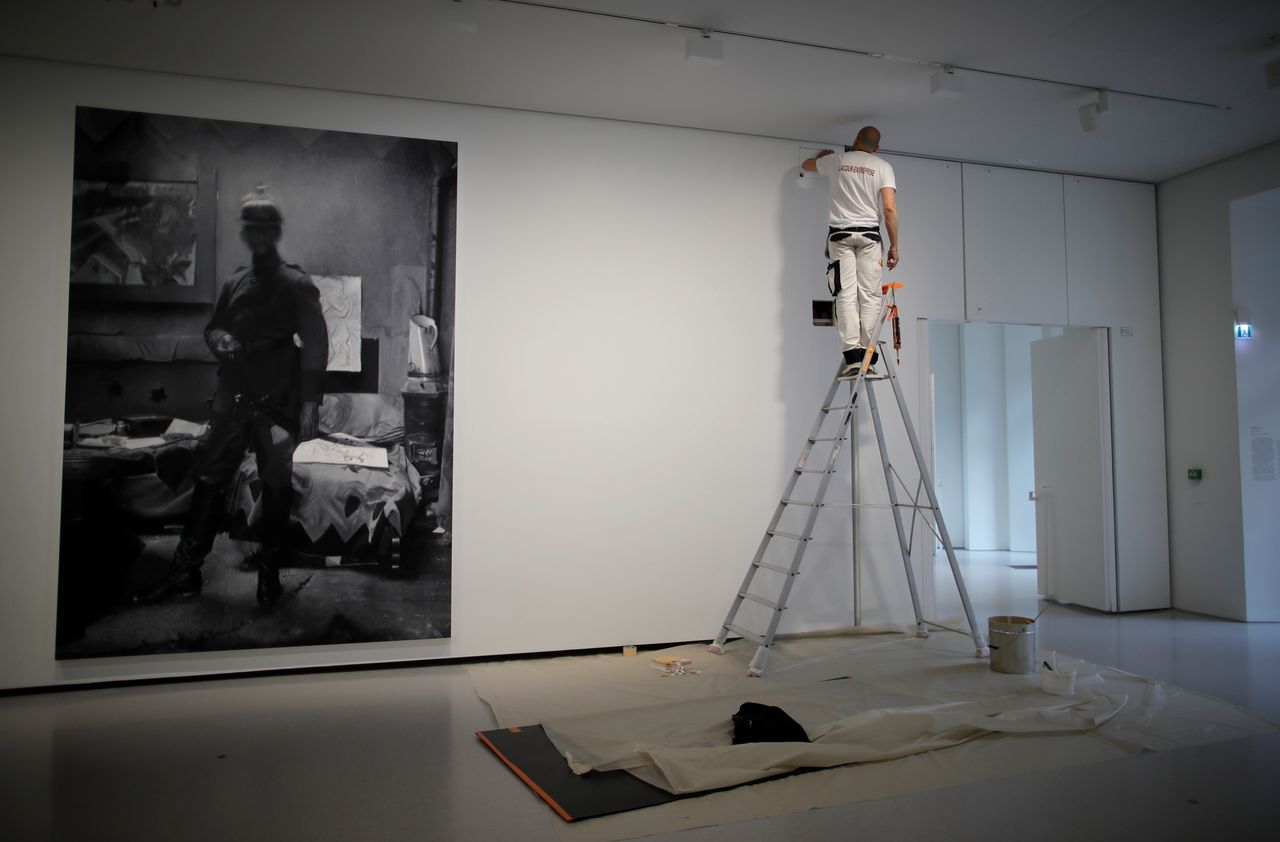 An employee works next to the artwork "Untitled (Ernst Ludwig Kirchner), 2010" by artist Rudolf Stingel in Gallery 4 during a press visit at the Bourse de Commerce - Pinault Collection contemporary art museum in Paris, France, May 14, 2021. REUTERS/Sarah Meyssonnier 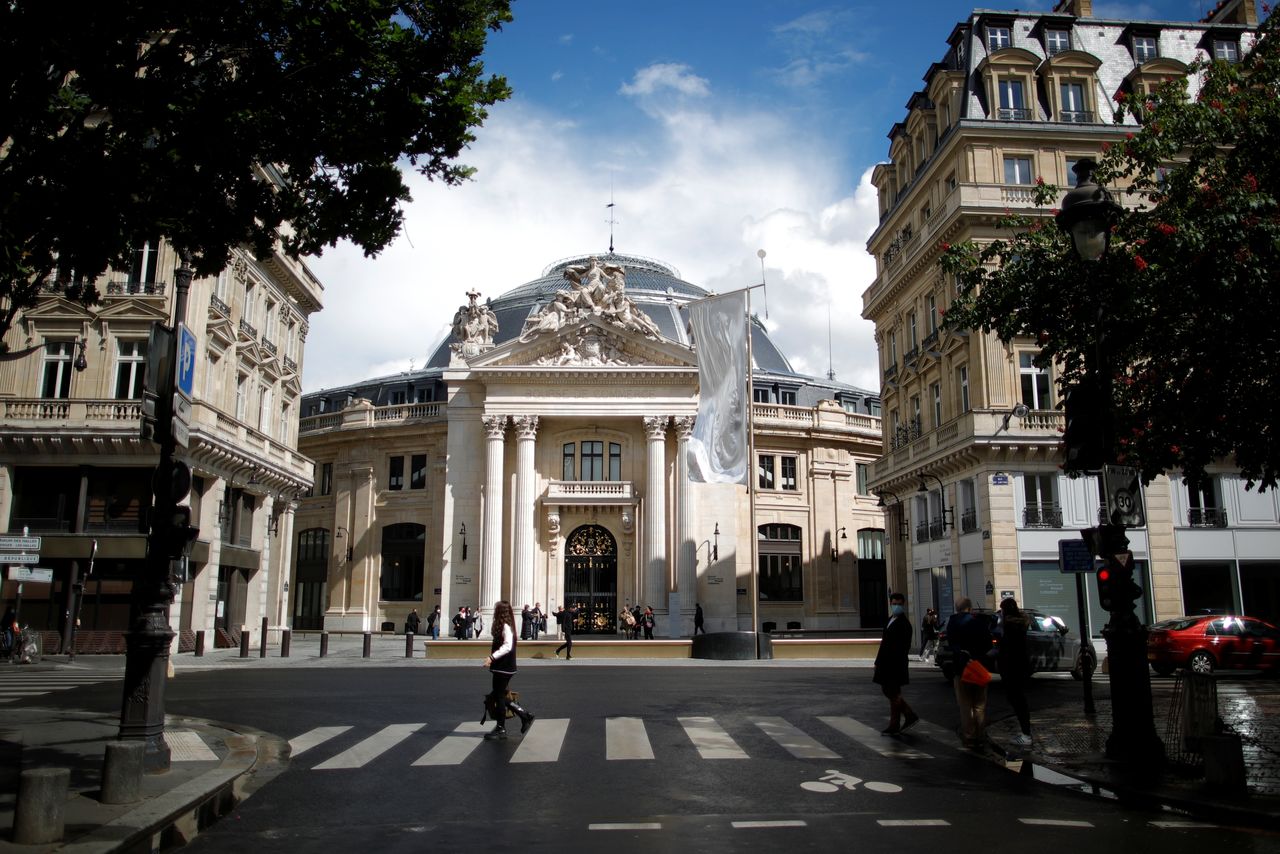