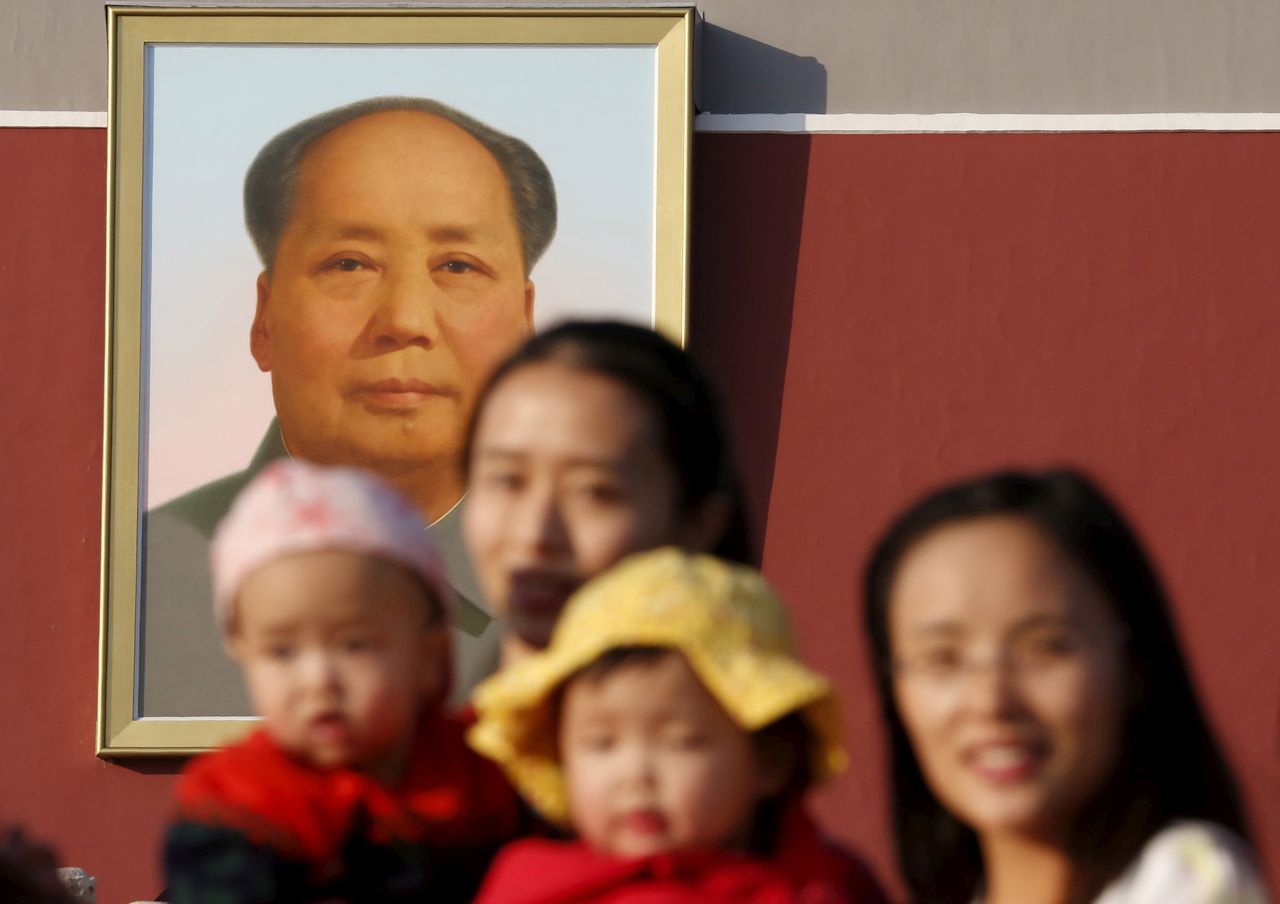 FILE PHOTO: Two women and their babies pose for photographs in front of the giant portrait of late Chinese chairman Mao Zedong on the Tiananmen Gate in Beijing November 2, 2015. REUTERS/Kim Kyung-Hoon

BEIJING (Reuters) -China will tread carefully in relaxing its birth policies for fear of harming social stability, even as the latest census highlights the urgency to address the country's declining birth trends and ageing population, policy sources said.

Expectations for birth policy reforms are rising after the 2020 census last week showed China's population grew at its slowest in the last decade since the 1950s as births declined and ageing accelerated.

A fertility rate of 1.3 children per woman in 2020, on par with ageing societies like Japan and Italy, underscores the risk for China: the world's second-biggest economy may already be in irreversible population decline without having first accumulated the household wealth of G7 nations.

Top leaders are working out a broader plan to cope with demographic challenges, the sources said, including more effective ways to encourage childbearing by easing financial burdens on couples, rather than simply removing birth curbs.

Raising the retirement age, which Beijing has said will be done gradually, will help slow a decline in the workforce and eventually ease pressures on the under-funded pension system, they said.

China introduced a controversial "one-child policy" in the late 1970s but relaxed restrictions in 2016 to allow all couples to have two children as it tried to rebalance its rapidly-ageing population. The change, however, failed to halt declining births.

The sources said they expect Beijing to encourage more childbearing under the current policy framework, before fully lifting birth restrictions over the next 3-5 years.

Removing birth restrictions could have unintended consequences: a limited impact on city dwellers, who are reluctant to have more children due to high costs, while rural families could expand faster, adding to poverty and employment pressures, the sources said.

"If we free up policy, people in the countryside could be more willing to give birth than those in the cities, and there could be other problems," said a policy source who declined to be identified due to the sensitivity of the matter.

The sources are involved in policy discussions but not the final decision-making process.

The State Council Information Office did not immediately respond to Reuters' request for comment.

China aims to create at least 10 million new urban jobs a year, even as the working age population shrinks.

Liu Huan, an adviser to the Chinese cabinet, said China's main population challenge is not size but ageing, which will put heavy pressure on government finances.

"It's hard to resolve the birth problem given high housing, medical and education costs," he told Reuters. "So we should have comprehensive policies."

The People's Bank of China (PBOC) has in recent weeks become more vocal about the sensitive population issue.

In April, the PBOC said in a working paper that China should "fully liberalise and vigorously encourage childbirth" to offset the economic impact, saying China should draw lessons from Japan's "lost 20 years".

The demographic shifts could lead to economic stagnation, a falling savings rate and asset price deflation, while the current pension system is ill-prepared for the ageing trajectory, it said.

But changes to the present policy will likely be gradual.

"Major policy decisions will come only when the pressure is big enough. Whether we change policy depends on assessments of the impact on social stability," said a government adviser, who also declined to be named.

Deepening rivalry with the United States has raised the urgency for China to build a more innovation-driven economy. Under President Xi Jinping's "dual circulation" strategy, China aims to ease dependence on overseas markets and technology.

"We should make a transition from population dividend to talent dividend," the first policy source said.

The census showed improved education over the last decade. The proportion of people with university education rose to 15.5% from 8.9%, and average years of schooling for people aged 15 or above edged up to 9.9 years from 9.1 years.

Rob Subbaraman, chief economist at Nomura, said "reducing demographic headwinds" will be a rising priority for China as it seeks to avoid the so-called middle income trap.

"The experiences of other Asian countries show that it is challenging to encourage society to increase the fertility rate, but all efforts should be tried to increase the labour force and make it more productive."