TOKYO (Reuters) -A top medical organisation has thrown its weight behind calls to cancel the Tokyo Olympics saying hospitals are already overwhelmed as the country battles a spike in coronavirus infections less than three months from the start of the Games.

The Tokyo Medical Practitioners Association representing about 6,000 primary care doctors said hospitals in the Games host city "have their hands full and have almost no spare capacity" amid a surge in infections.

"We strongly request that the authorities convince the IOC (International Olympic Committee) that holding the Olympics is difficult and obtain its decision to cancel the Games," the association said in a May 14 open letter to Prime Minister Yoshihide Suga which was posted to its website on Monday.

A jump in infections has stoked alarm amid a shortage of medical staff and hospital beds in some areas of the Japanese capital, promoting the government to extend a third state of emergency in Tokyo and several other prefectures until May 31.

Doctors would soon face the added difficulty of dealing with heat exhaustion patients during the summer months and if the Olympics contributed to a rise in deaths "Japan will bear the maximum responsibility", it added.

Other health experts and medical groups have voiced their concerns https://www.reuters.com/lifestyle/sports/tokyo-olympics-must-be-reconsidered-due-japans-failure-contain-pandemic-report-2021-04-16 about the Olympics, while an online petition calling for the Games to be cancelled was signed by hundreds of thousands of people.

Overall, Japan has avoided an explosive spread of the virus experienced by other nations, but the government has come under sharp criticism https://www.reuters.com/world/asia-pacific/japan-vaccine-chief-blames-drug-approval-system-slow-inoculation-drive-2021-05-13 for its sluggish vaccination roll-out.

Only about 3.5% of its population of about 126 million has been vaccinated, according to a Reuters tracker.

Underscoring the challenges with the vaccinations, booking systems for mass inoculation sites being launched in Tokyo and Osaka - which started accepting bookings on Monday - were marred by technical glitches.

Preparations for the July 23-Aug. 8 Games are progressing under tight COVID-19 protocols, such as an athletics test event https://www.reuters.com/lifestyle/sports/tokyos-olympic-stadium-holds-track-field-test-event-minus-fans-2021-05-09 featuring 420 athletes in early May.

But multiple pre-Olympic training camps, including one for the United States' track and field team have been cancelled, and athletes have voiced concerns about the Games taking place in the midst of a global pandemic.

Canadian equastrian athlete and gold medalist Eric Lamaze announced on Monday that he had pulled out of being an Olympic candidate, citing personal health concerns. He has been treated for a brain tumor over the past three years.

"My health is something that I take very seriously, and I've decided that Tokyo is not the best venue for me," Lamaze said in the statement.

"The Olympics are a celebration of the athletes and I don't think we're going to have a true celebration in Tokyo," he added. "It's not the time to celebrate."

The Games have already been postponed once due to the pandemic.

With cases surging across much of Asia, the World Economic Forum on Monday cancelled its annual meeting of the global elite due to be held in Singapore in August.

Under the state of emergency in parts of Japan, bars, restaurants, karaoke parlours and other places serving alcohol will remain closed, although large commercial facilities can re-open under shorter hours. Hard-hit Tokyo and Osaka will continue to keep these larger facilities closed.

The number of COVID-19 cases nationwide dropped to 3,680 on Monday, the lowest level since April 26, according to public broadcaster NHK, but the number of heavy infections hit a record high of 1,235, the health ministry said on Tuesday. 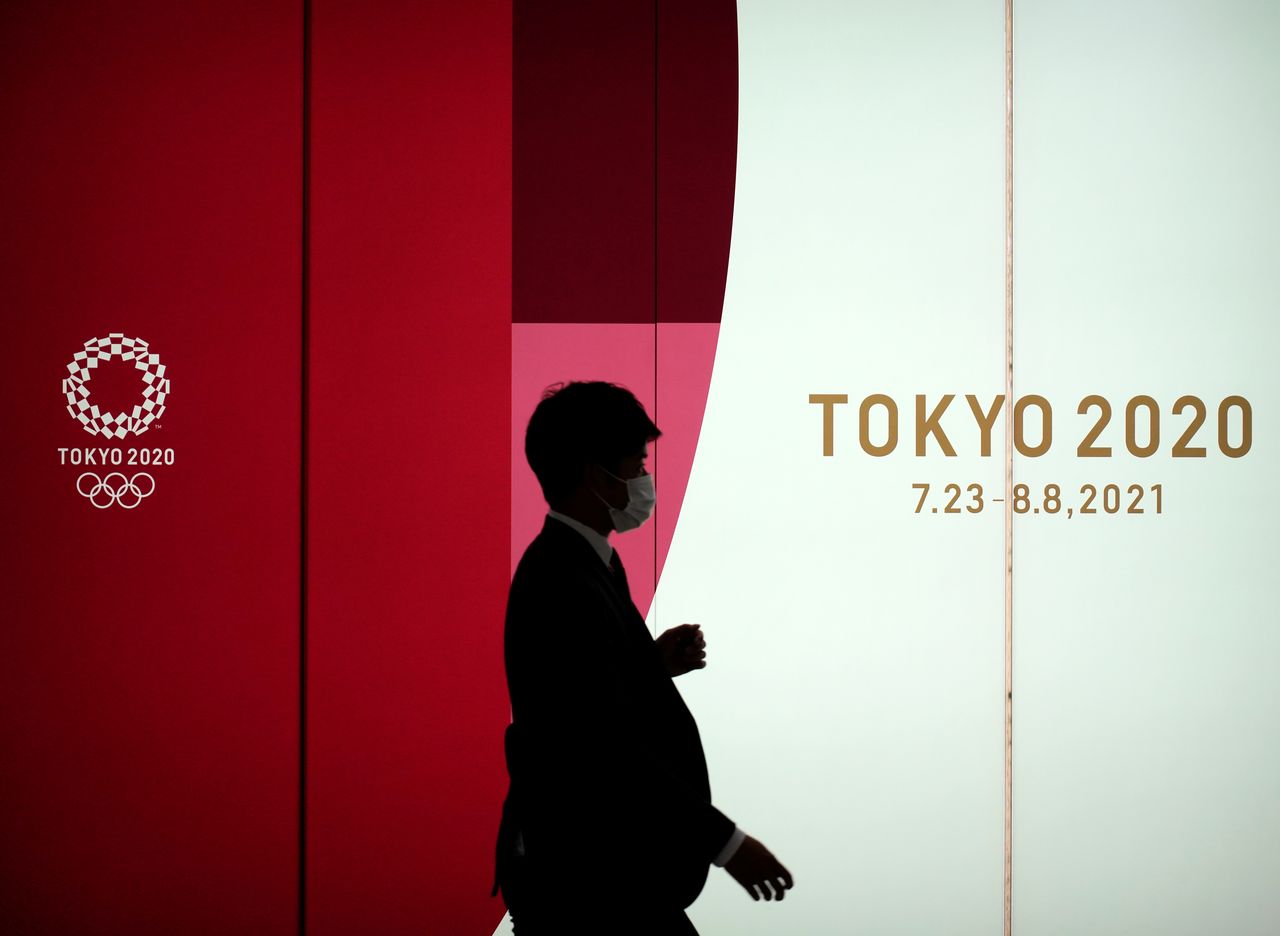 A man wearing a protective face mask walks by an advertising of Tokyo 2020 Olympic Games that have been postponed to 2021 due to the coronavirus disease (COVID-19) outbreak, in Tokyo, Japan May 14, 2021. REUTERS/Naoki Ogura 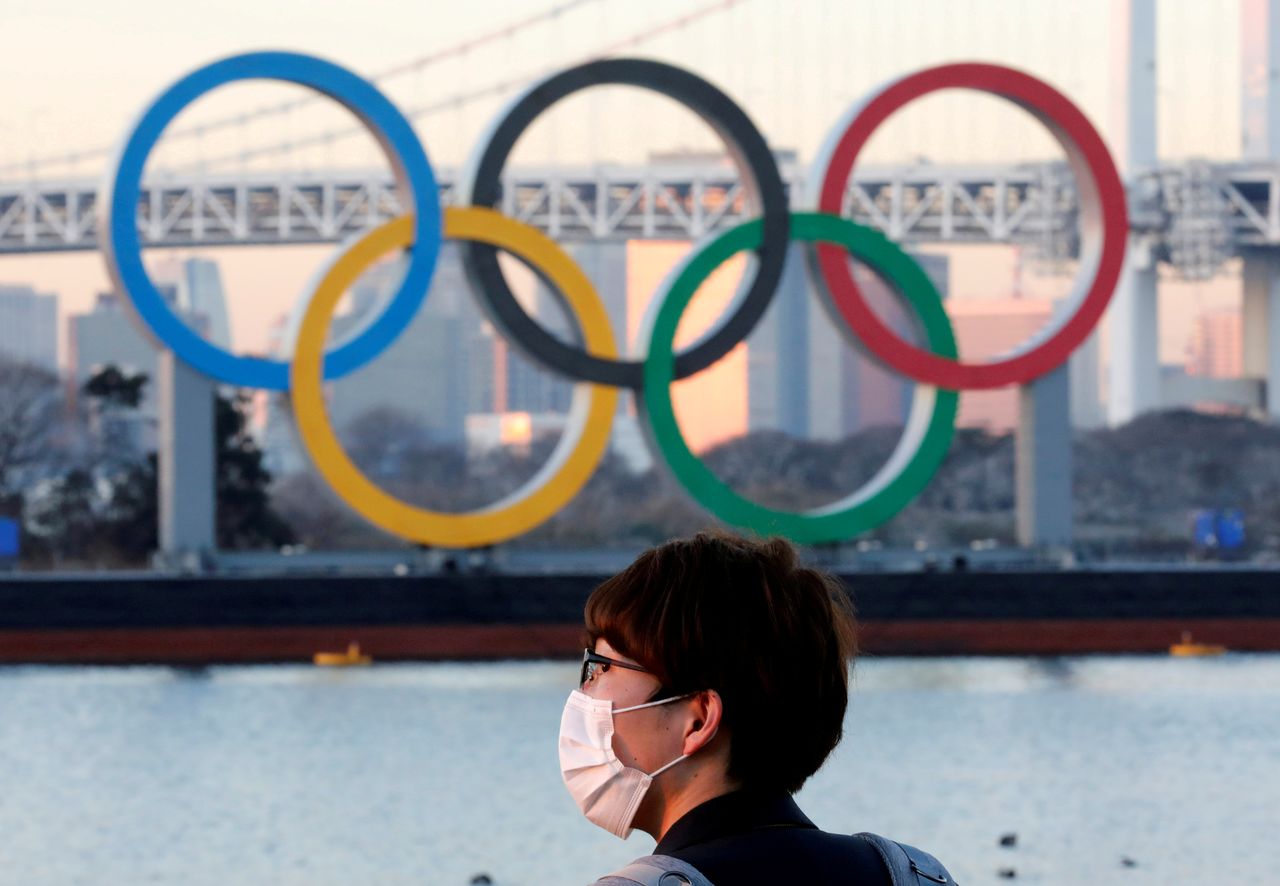