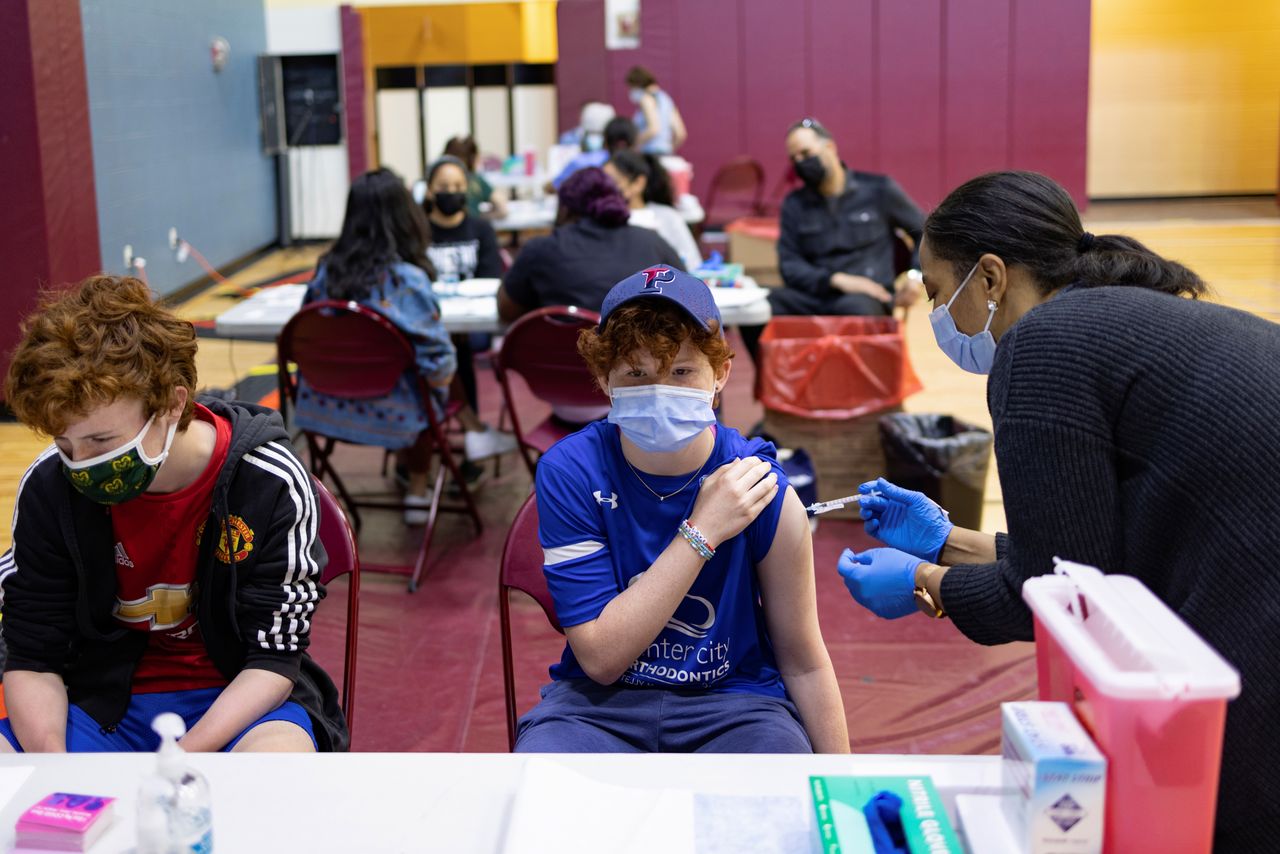 A teenager receives a coronavirus disease (COVID-19) vaccine at a clinic run by the Philadelphia Department of Public Health in partnership with the Black Doctors COVID-19 Consortium to encourage all eligible teenagers to get vaccinated in Philadelphia, Pennsylvania, U.S., May 18, 2021. REUTERS/Hannah Beier

Nearly two-thirds of people tested in India have shown exposure to the novel coronavirus, a chain of private laboratories said on Wednesday, indicating a runaway spread of the virus as the daily death toll rose to a record 4,529.

For months, nowhere in the world has been hit harder than India by the pandemic, as a new variant discovered there fuelled a surge of up to more than 400,000 new infections a day.

Nepal and Bangladesh are making frantic diplomatic efforts to secure vaccines to prop up their faltering inoculation drives as their stocks run out and supply prospects have become clouded by a prolonged Indian curb on vaccine exports.

Reuters reported on Tuesday that India was unlikely to resume major exports of COVID-19 vaccines until October at the earliest as it diverts shots for domestic use, a longer-than-expected delay set to worsen a shortage of supplies coming through the COVAX global vaccine sharing scheme.

The European Union put forward a plan on Wednesday it believes will help boost production and availability of COVID-19 vaccines more effectively than a proposed waiver of patent rights now backed by the United States.

Under pressure from developing countries to agree to waiving intellectual property rights for vaccines and treatments, the EU plan will focus on export restrictions, pledges from vaccine developers and use of existing World Trade Organization rules.

"Universal and fair access to vaccines and treatments must be the global community's number one priority," EU Trade Commissioner Valdis Dombrovskis said.

Variant may be spreading in UK less quickly than feared

The COVID-19 variant first identified in India may be spreading less quickly than first feared, a leading British epidemiologist said on Wednesday, but vaccines might be less effective at limiting its spread.

Prime Minister Boris Johnson on Friday warned that the emergence of the B.1.617.2 variant might derail his plans to lift England's lockdown fully on June 21 but said that it all depended on the degree to which it spread.

"There's ... a glimmer of hope from the recent data that, whilst this variant does still appear to have a significant growth advantage, the magnitude of that advantage seems to have dropped a little bit with the most recent data," said Neil Ferguson, an epidemiologist at Imperial College London.

The International Olympic Committee (IOC) reassured an anxious Japan on Wednesday that the Tokyo Olympics would be safe for athletes as well as the host community, amid mounting opposition to the Games.

Speaking in Tokyo alongside senior Japanese officials, IOC chief Thomas Bach said he believed more than 80% of residents of the Olympic Village would be vaccinated or booked for vaccination ahead of the Games set to start on July 23.

He rejected growing calls to cancel the global sporting showpiece, already delayed once due to the pandemic, saying that other sporting events had proved the Olympics could go ahead with strong COVID precautions.