Analysis: Global liquidity is shrinking and that's no bad thing 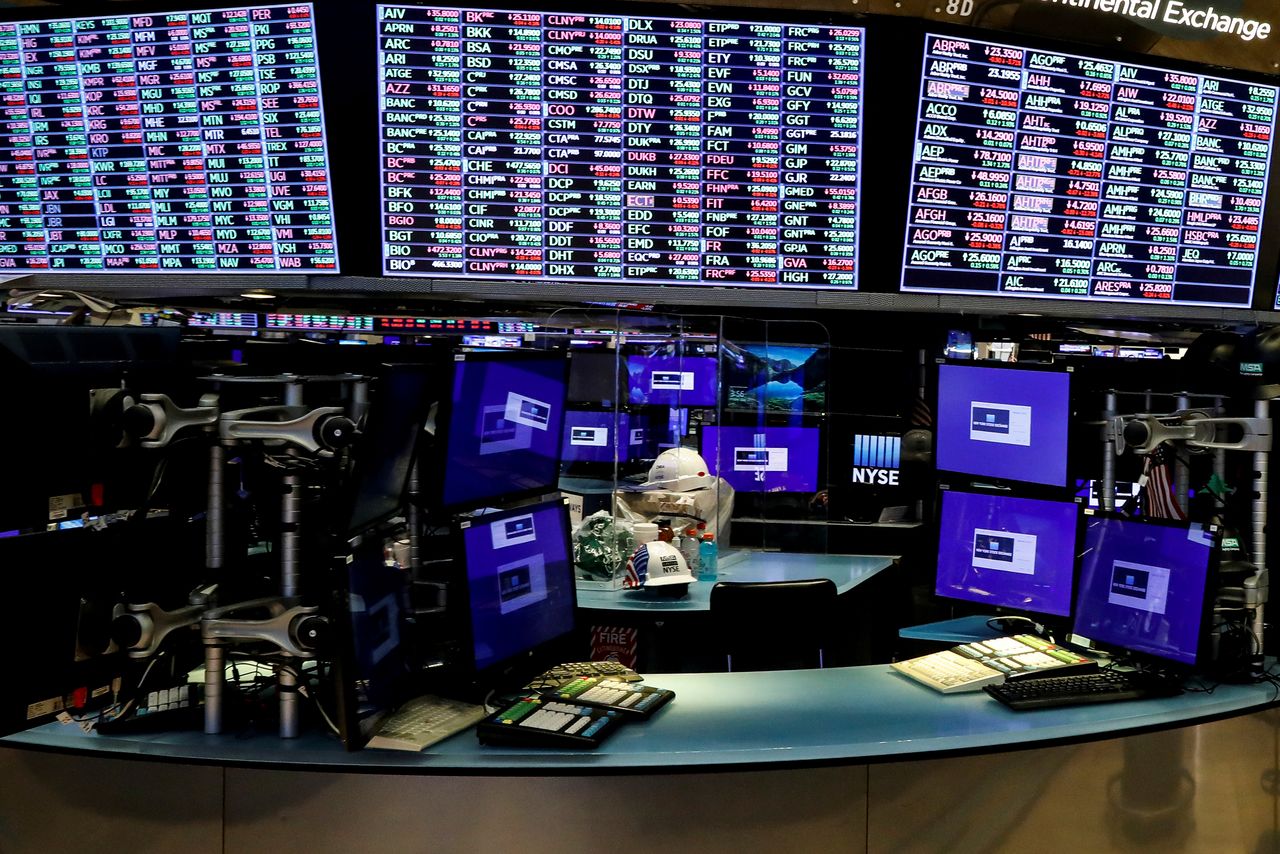 FILE PHOTO: Dividers are seen inside a trading post on the trading floor as preparations are made for the return to trading at the New York Stock Exchange (NYSE) in New York, U.S., May 22, 2020. REUTERS/Brendan McDermid/File Photo

By Tommy Wilkes and Ritvik Carvalho

LONDON (Reuters) - After a year of record-breaking cash injections, the world's big central banks are starting to ease off the stimulus pedal, forcing economies and financial markets to practise walking on their own again.

Not everyone is dismayed at the prospect. Since March 2020, central banks and governments have flooded markets with some $27 trillion - a third of global gross domestic product, consultancy CrossBorder Capital estimates.

Since then, world stocks have surged 85%, economic growth is rebounding from last year's pandemic-inflicted devastation, and inflation expectations are rising. Continuing to pump out cash at last year's pace would do more harm than good, some economists argue.

Still, cheap cash remains plentiful. At the end of March, 82% of central banks were running loose monetary policies, CrossBorder estimates, though that is down from 88% in January.

Last month the Bank of Canada began tapering its asset purchases and signalled it could raise interest rates next year, while the Bank of England this month slowed its money-printing. Others, including the Federal Reserve, may start scaling back stimulus by the end of the year.

In other words, the growth of liquidity - the catchphrase for all that money pumped in by central banks, private lenders and governments - has peaked and is already waning.

The main drag is China, he says, which has halved its liquidity additions from last year's peak.

The other big stimulus plank was government spending but as lockdowns end, so do emergency support schemes for workers and businesses.

Some central bank policy tightening may be offset by U.S. President Joe Biden's stimulus plans, which if approved, could top 15% of GDP. But much of that is to be financed through tax rises, limiting its stimulatory effect.

JPMorgan strategist Nikolaos Panigirtzoglou said that on all commonly-used measures of gauging "excess liquidity" the extraordinarily loose conditions of 2020 appear to be tightening.

First, money supply growth has been falling relative to GDP since January, he notes, a reversal of 2020.

"That means we may already have entered a phase where excess liquidity is being contracted," Panigirtzoglou said.

Second, the cash holdings of global investors relative to the size of their equity and bond holdings are now "exceptionally low". It means stock markets "must rely on other things like the growth trajectory to sustain the bull market". (Graphic: Pace of central bank purchases falls in 2021, https://fingfx.thomsonreuters.com/gfx/mkt/oakpekyjdpr/Pasted%20image%201621423590115.png)

Since the 2008 crisis, markets have become hooked on ever-increasing sums of cash ploughed in by central banks. Past attempts to cut money-printing, such as in 2013 and late-2018, sowed market panic, forcing policymakers to backtrack.

But today's backdrop, with economies recovering strongly and bond markets finally pricing in the return of inflation, looks different.

Property markets, fed by abundant liquidity, may be overheating; house prices are rising at an annualised six-month rate of more than 10%, according to data from the Bank of International Settlements analysed by CrossBorder Capital.

So piling on more stimulus risks an inflation explosion and overheating, some economists warn. Larry Summers, advisor to former President Barack Obama, accused the Fed this week of "dangerous complacency" in keeping policy so loose.

Pictet's Donzé too believes the Fed should kick off tapering by year-end "before excesses emerge and force a drastic tightening that could derail current expansion."

The Fed, ECB, BoE and the Bank of Japan could shrink asset purchases this year to about $3.4 trillion from almost $9 trillion last year, BofA estimates.

But that's still huge by pre-2020 standards. Aside from the Bank of Canada, big central banks will likely end 2021 with significantly bigger balance sheets.

Norman Villamin, chief investment officer at Swiss wealth manager UBP, said that given policymakers' recent experience of trying to tighten and their focus on job creation, "if policymakers are going to make a mistake, it will likely be a mistake of erring on the side of being too easy rather than becoming too tight too soon." (Graphic: Central bank balance sheet projections, https://graphics.reuters.com/HEALTH-CORONAVIRUS/jznvnjmjzvl/chart.png)