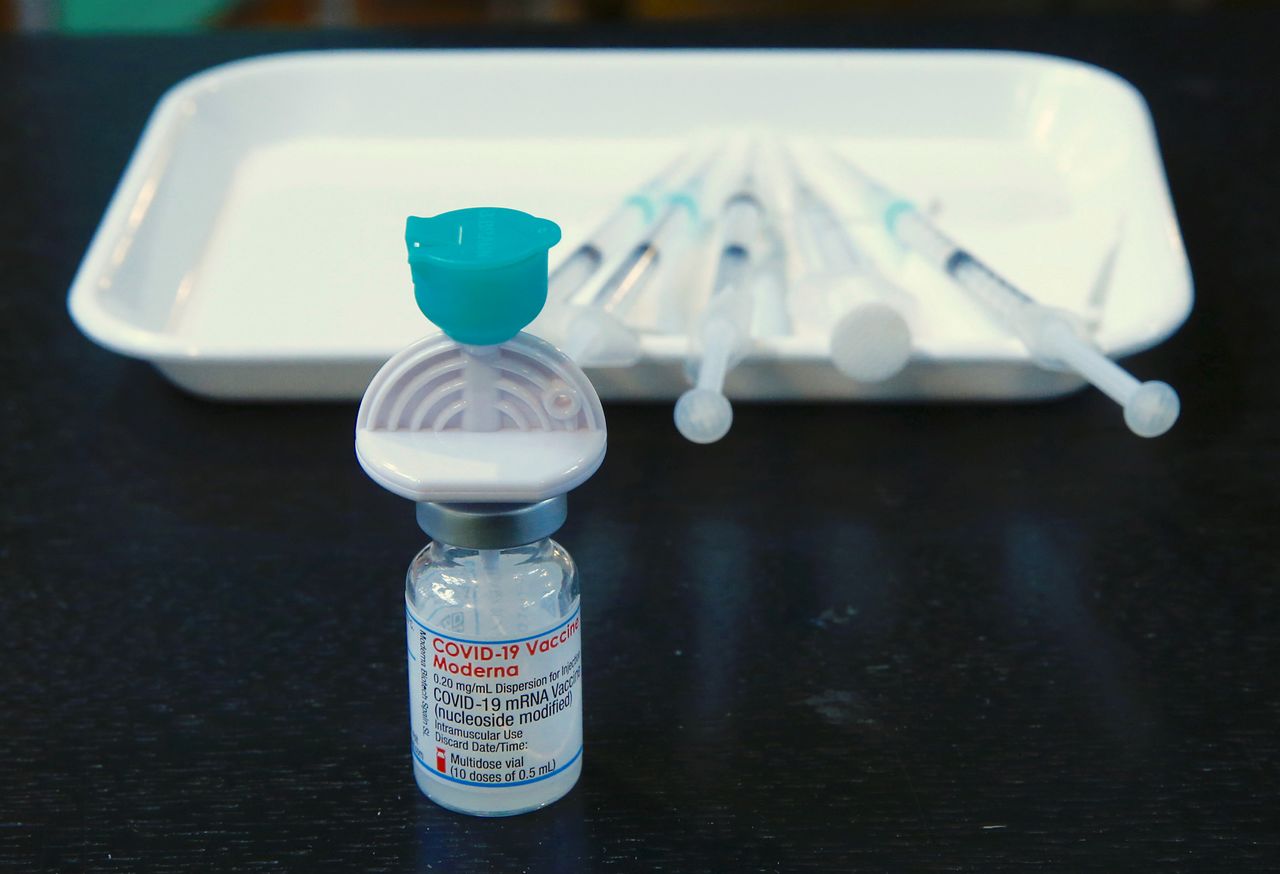 FILE PHOTO: A vial containing the Moderna COVID-19 vaccine is seen at a temporarily vaccination center of Swiss Medix health center as the spread of the coronavirus disease continues, in the Offene St. Jakob Kirche Reformed church in Zurich, Switzerland May 12, 2021. REUTERS/Arnd Wiegmann

TOKYO (Reuters) - Japan expanded a state of emergency to cover the southern island of Okinawa on Friday, as authorities approved two more coronavirus vaccines to speed a lagging inoculation campaign.

The newly approved vaccines, from Moderna Inc and AstraZeneca PLC, will join the one co-developed by Pfizer Inc and BioNTech SE in a vaccination drive that began in mid-February.

Earlier, media said the government would hold off on the use of AstraZeneca's vaccine because of concerns over blood clots and bleeding in some. The company said it was aware of the government's decision that its vaccine would not be immediately used.

"We'll do our utmost in working to ensure that all elderly people who seek vaccinations can get their two shots by the end of July," Economy Minister Yasutoshi Nishimura, who is leading the coronavirus response effort, told reporters.

Japan has vaccinated just 4.1% of its population, according to Reuters' global tracker https://tmsnrt.rs/3vbj5CE, the slowest rate among the world's larger, rich countries.

In contrast to some other Group of Seven (G7) nations that are beginning to end pandemic-busting lockdown measures, much of Japan remains under emergency curbs amid a fourth wave of infections.

On Friday, the government added Okinawa to its list of nine prefectures placed under the strictest emergency measures. They include Tokyo, where the Olympic Games are due to start in about two months.

Fears that the Olympics would turn into a super-spreader event have persisted, ensuring opposition by the majority of the public to holding the Games this year.

The state of emergency for Okinawa would run for about a month, from Sunday through June 20, Prime Minister Yoshihide Suga said, beyond the May 31 end-point of the other nine.

Suga said he would decide by the end of this month whether to extend or lift the state of emergency.

It is the third consecutive week that Japan is expanding the state of emergency. With about 695,000 infections and 12,000 deaths, Japan is finding its medical system increasingly strained by a spike in more infectious variants.

With the Olympics starting on July 23, Tokyo is under particular pressure to cut infections and the strain on the medical system and emerge from the emergency on schedule this month.

After a 30-minute meeting with Suga on Friday, Tokyo Governor Yuriko Koike said she sought vaccine supplies for the capital, which begins mass vaccinations next week.

The two agreed to work towards a "safe and secure" Olympics this summer, they later told reporters.