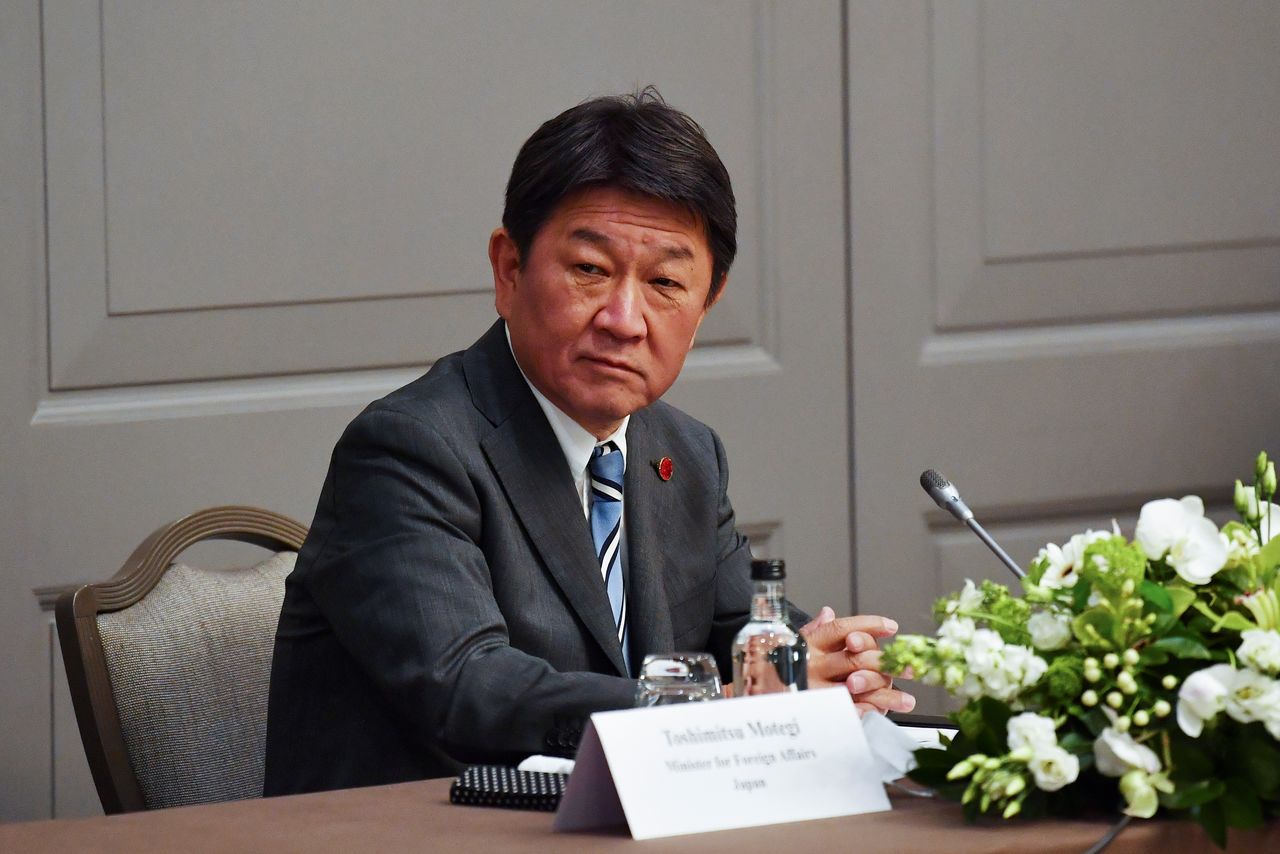 FILE PHOTO: Japan's Foreign Minister Toshimitsu Motegi takes part in a trilateral meeting with USA and South Korea on the sidelines of the G7 foreign ministers meeting in London, Britain May 5, 2021. Ben Stansall/Pool via REUTERS

TOKYO (Reuters) -Japan will have no choice but to rethink its Myanmar development aid if the situation in the Southeast Asian country does not improve, Foreign Minister Toshimitsu Motegi said on Friday, adding that private investment might also not be possible.

Japan is a major donor to Myanmar and big Japanese companies have aggressively expanded business in recent years, seeing it as the region's last major frontier market.

Myanmar's security forces have killed more than 800 people since a wave of protests broke out after the military overthrew an elected government led by Nobel laureate Aung San Suu Kyi on Feb. 1, the Assistance Association for Political Prisoners activist group says.

"If the current situation continues, we will have no choice but to re-think our overseas development aid, and I believe it also might not be possible for private companies to invest, even if they want to," Motegi told a regular news conference.

"As a country that's supported democracy, and as a friend, we must convey this clearly."

He gave no further details, but Motegi was quoted in the Nikkei newspaper on Friday as saying that Japan was willing to cut off all aid to Myanmar, even for existing projects. Japan has already halted negotiations on new aid.

Japan has been a big investor and source of technical help and development aid for Myanmar's semi-civilian governments in the decade of political reform that followed the end of the last era of military rule in 2011.

Myanmar's generals have in the past shunned efforts by foreign governments to press them to follow a more democratic path.

In what appeared to be a sign of an uncompromising military stand against the pro-democracy movement, Myanmar's junta-appointed election commission will dissolve Suu Kyi's political party because of what it said was fraud in a November election, the Myanmar Now news outlet said on Twitter, citing a commissioner.

Reuters was not immediately able to reach the election commission and officials from Suu Kyi's party did not respond to a request for comment.

Earlier on Friday, a Japanese journalist recently freed from a Myanmar jail urged his government to take "concrete action" against the military regime, including reviewing its development aid.

Myanmar authorities arrested Yuki Kitazumi, a freelance reporter who was covering the unrest that engulfed the country after a military takeover on Feb. 1, and charged him with spreading false information.

Kitazumi, who lived in Myanmar for several years and used to run a media company in the main city of Yangon, was freed after negotiations led by the Japanese ambassador. The journalist returned to Japan last week.

"I was freed thanks to the backing of the Japanese government but it's not like that has resolved the problem," Kitazumi told a news conference in Tokyo, referring to Myanmar's turmoil.

Kitazumi said Japan enjoyed strong influence over Myanmar owing to its historic ties and appealed to his government to take "concrete action" to help resolve the confrontation between the pro-democracy movement and the generals.

"I'd like Japan to use the strength it used to free me to resolve the problem in Myanmar," he said.

Asked about Motegi's earlier comments to the Nikkei, Kitazumi said that cutting some projects would send a "strong message" and that a review of Japan's engagement was necessary.