Biden and Moon said the complete denuclearization of the Korean peninsula is their goal, with Biden stressing he was "under no illusions" about the difficulty of getting North Korea to give up its nuclear arsenals after his predecessors failed.

"We both are deeply concerned about the situation," Biden said at a joint news conference, adding that he and Moon shared a willingness to engage diplomatically with the North and "to take pragmatic steps to reduce tensions."

North Korea has rebuffed U.S. entreaties for diplomacy since Biden took over from Donald Trump, who had three summits with Kim and famously exchanged "beautiful letters" with the third-generation leader.

Kim refused to give up his nuclear weapons but did impose a freeze on testing them. He has not tested a nuclear bomb nor launched an inter-continental ballistic missile since 2017, although experts believe his arsenal has steadily grown.

Biden said he would be willing to meet Kim under the right conditions - if he agreed to discuss his nuclear program and that his advisers first met with their North Korean counterparts to lay the groundwork.

"I would not do what had been done in the recent past; I would not give him all he's looking for - international recognition as legitimate and allow him to move in the direction of appearing to be more ... serious about what he wasn't at all serious about."

Biden's comments appeared to reflect a shift in his thinking given that the White House said in March it was not his intention to meet with Kim.

South Korea had been pushing for the appointment of an envoy, and Moon, for whom engagement with North Korea is a legacy issue before he leaves office next year, said Sung Kim would help explore whether North Korea is willing to engage diplomatically. He said he expected a positive response.

Sung Kim is a Korean-American diplomat who served as special envoy for North Korea under President Barack Obama and helped set up Trump's summits with Kim Jong Un.

Jenny Town of 38 North, a Washington-based North Korea project, said Sung Kim's appointment was positive after the administration had signaled it was in no hurry to fill the post.

However, it has given no indication of what concessions it might offer to bring about talks. A joint summit statement called for full implementation of international sanctions Pyongyang wants lifted.

"The problem has been that the administration has only talked about denuclearization and continues to characterize any interactions with North Korea as nuclear negotiations," Town said. "So it's still a tough sell to get the North Koreans back to the table, but obviously Moon is going to push very hard."

Biden's administration undertook a broad review of North Korea policy but has said little about what its new policy entails, beyond that it would not be Obama's approach of refusing to engage North Korea, or Trump's flashy summitry.

Biden and Moon reaffirmed a strong alliance after the strains created by Trump, who badgered Moon as weak and threatened to pull U.S. troops out of South Korea.

Moon was the second foreign leader - after Japan's prime minister - to visit the White House since Biden took office in January, and Biden said their conversations were those of "old friends."

They also discussed China and Taiwan, which has complained of repeated military pressure from Beijing.

"We've shared the view that peace and stability in the Taiwan Strait is extremely important, and we agreed to work together on that matter while considering special characteristics in relations between China and Taiwan," Moon said.

Taiwan's Foreign Ministry expressed thanks for the support, saying the island "has always played a key role in regional stability and prosperity".

Washington had been keen to see a strong statement from Moon on China, but in its absence given the South Korean leader's concerns about upsetting his country's largest trading partner, Biden welcomed multibillion dollar investments by South Korean firms in strategic U.S. sectors such as microchips, where he has said the United States and its allies must outcompete Beijing.

In the summit statement, the two countries agreed to develop open and transparent 5G and 6G telecoms networks and to increase global supplies of chips for automobiles. They also agreed to explore creation of a supply chain task force for high-tech manufacturing.

Moon, under pressure at home over the COVID-19 pandemic, said the two countries had agreed a vaccine partnership that would combine U.S. expertise and Korean production capacity.

He said this would help supply COVID-19 vaccines in the Indo-Pacific region, while Biden said the United States would provide vaccinations for 550,000 South Korean soldiers.

The joint statement said Seoul would "substantially" increase its pledge to the COVAX international vaccine distribution effort this year and the two countries pledged to work with other partners to establish a new financing mechanism for health security. 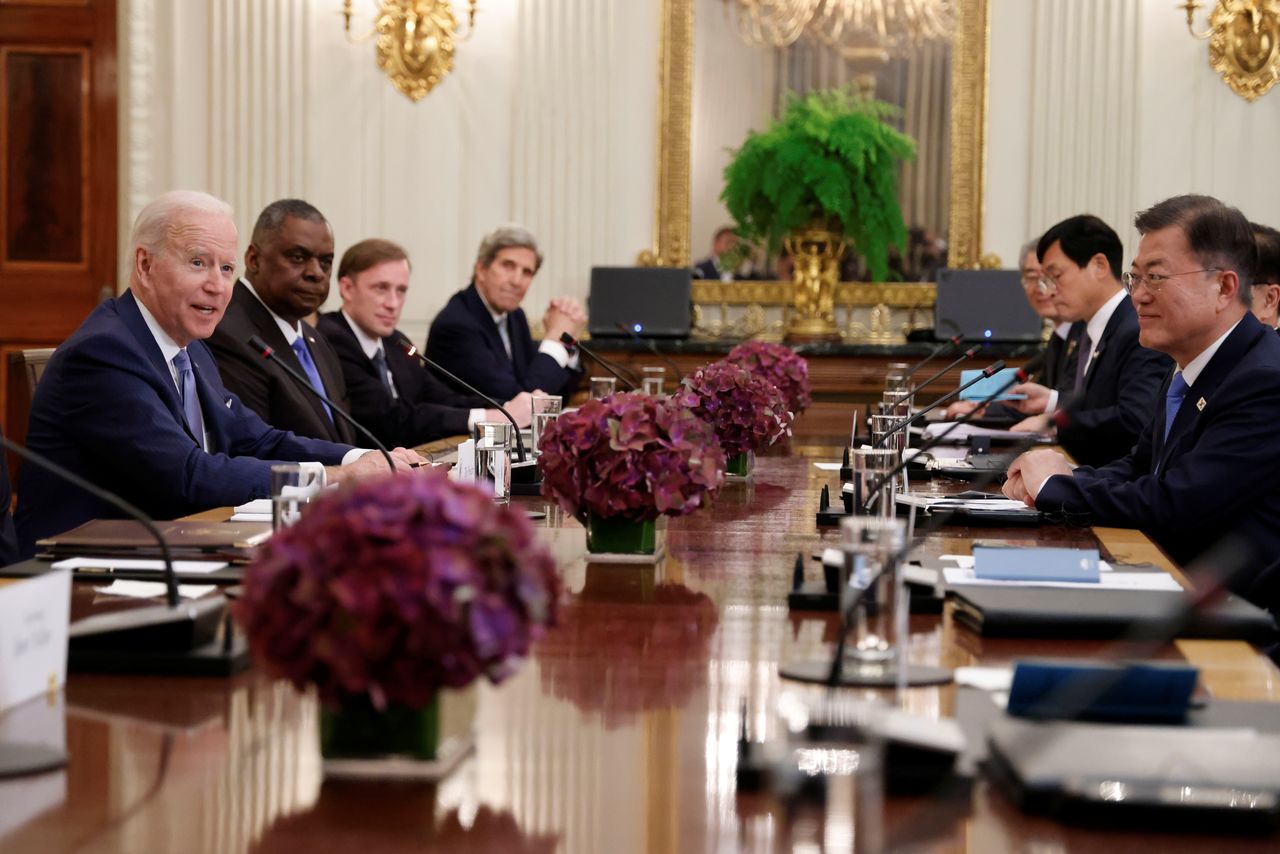 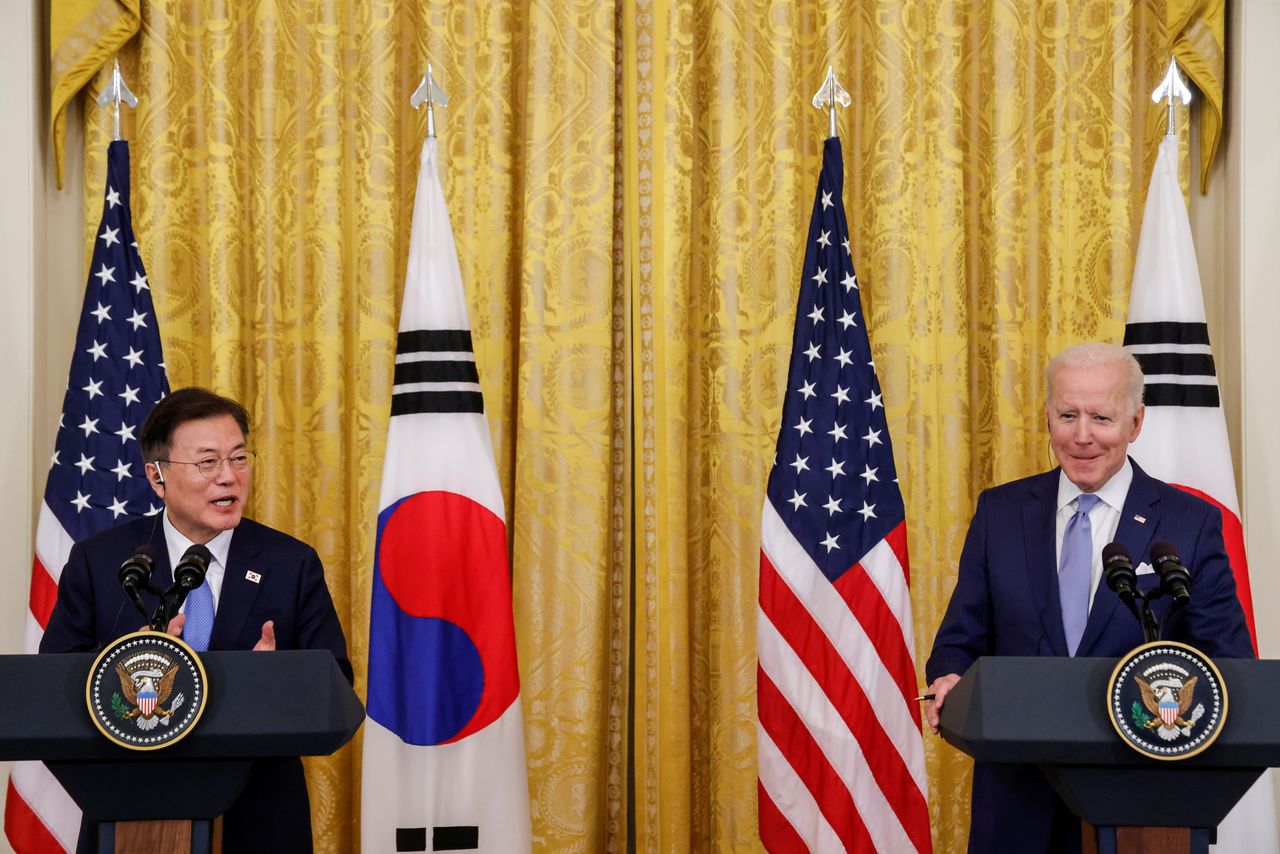 U.S. President Joe Biden reacts as South Korea's President Moon Jae-in speaks during a joint news conference after a day of meetings at the White House, in Washington, U.S. May 21, 2021. REUTERS/Jonathan Ernst 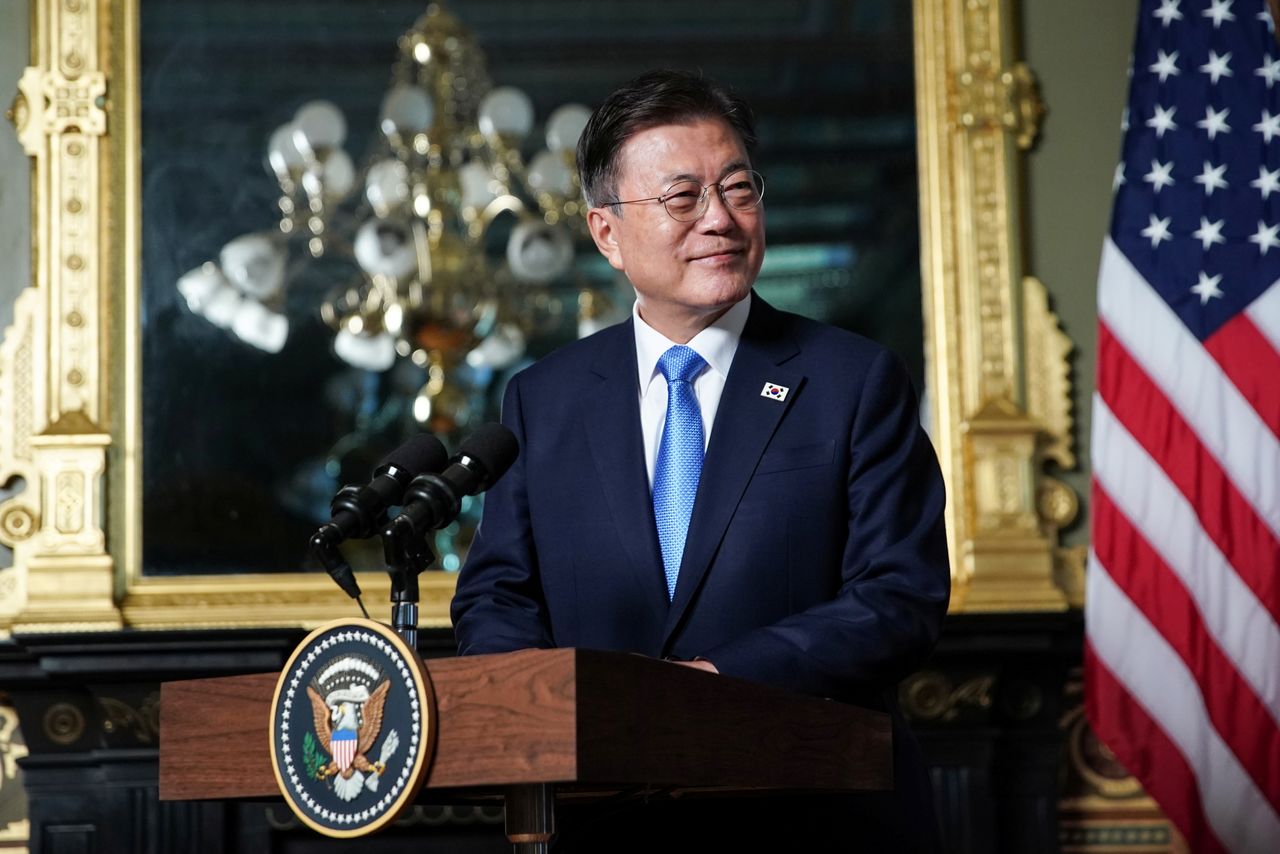 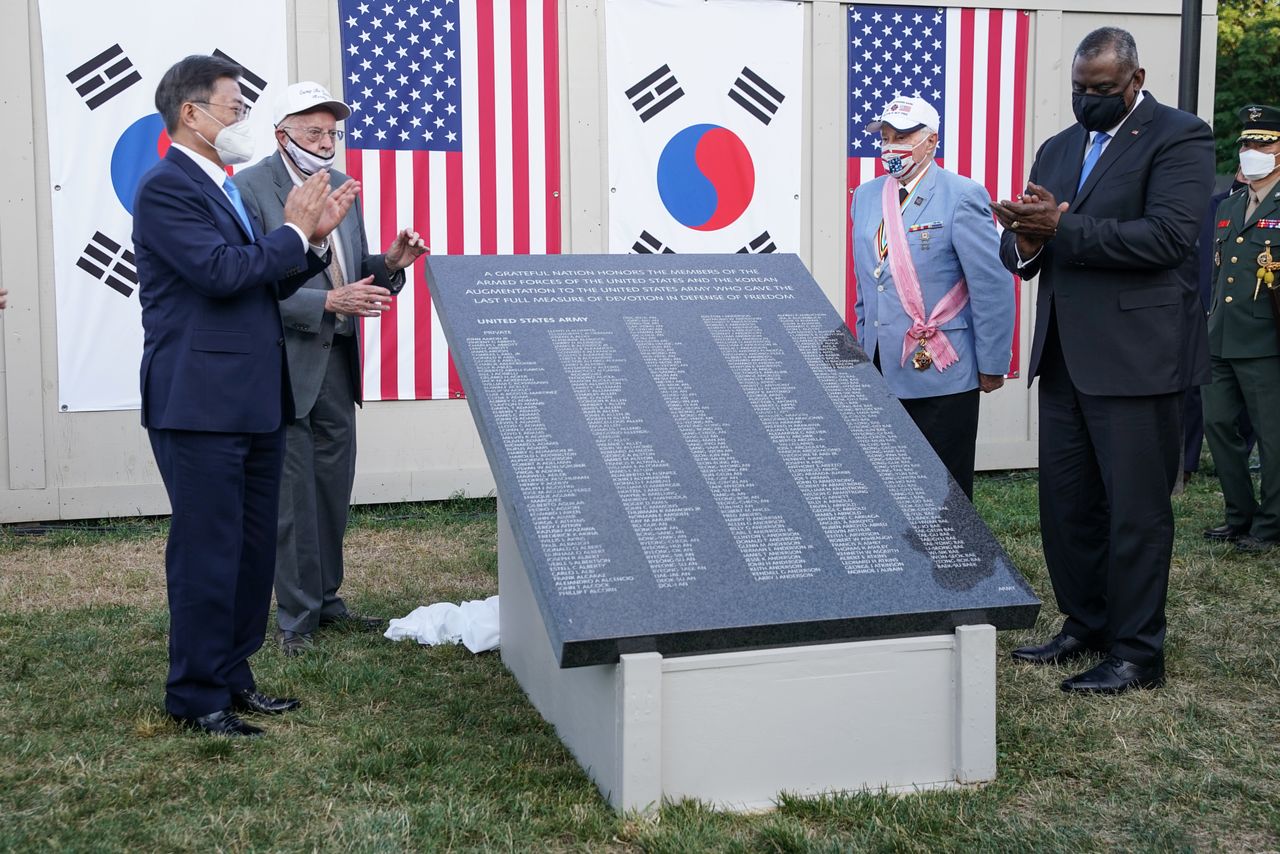 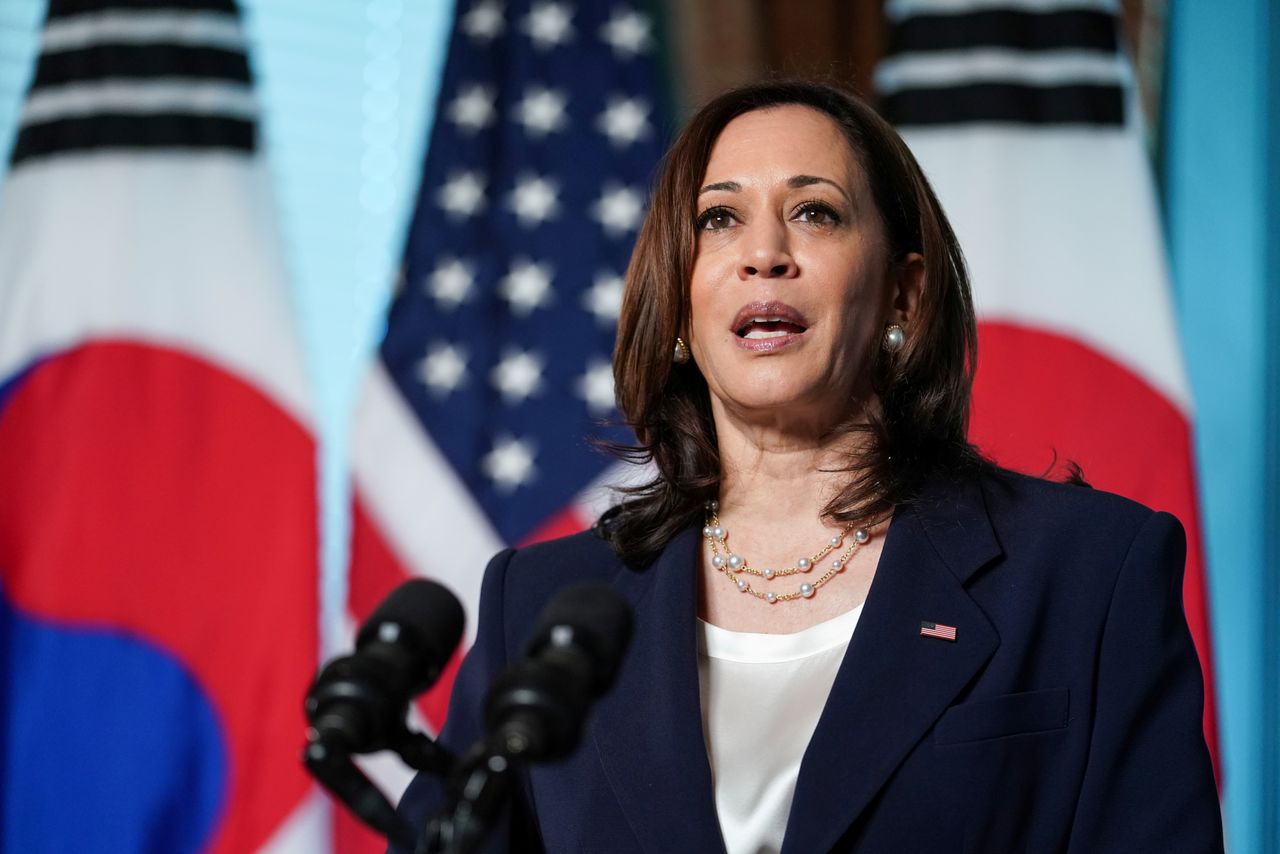 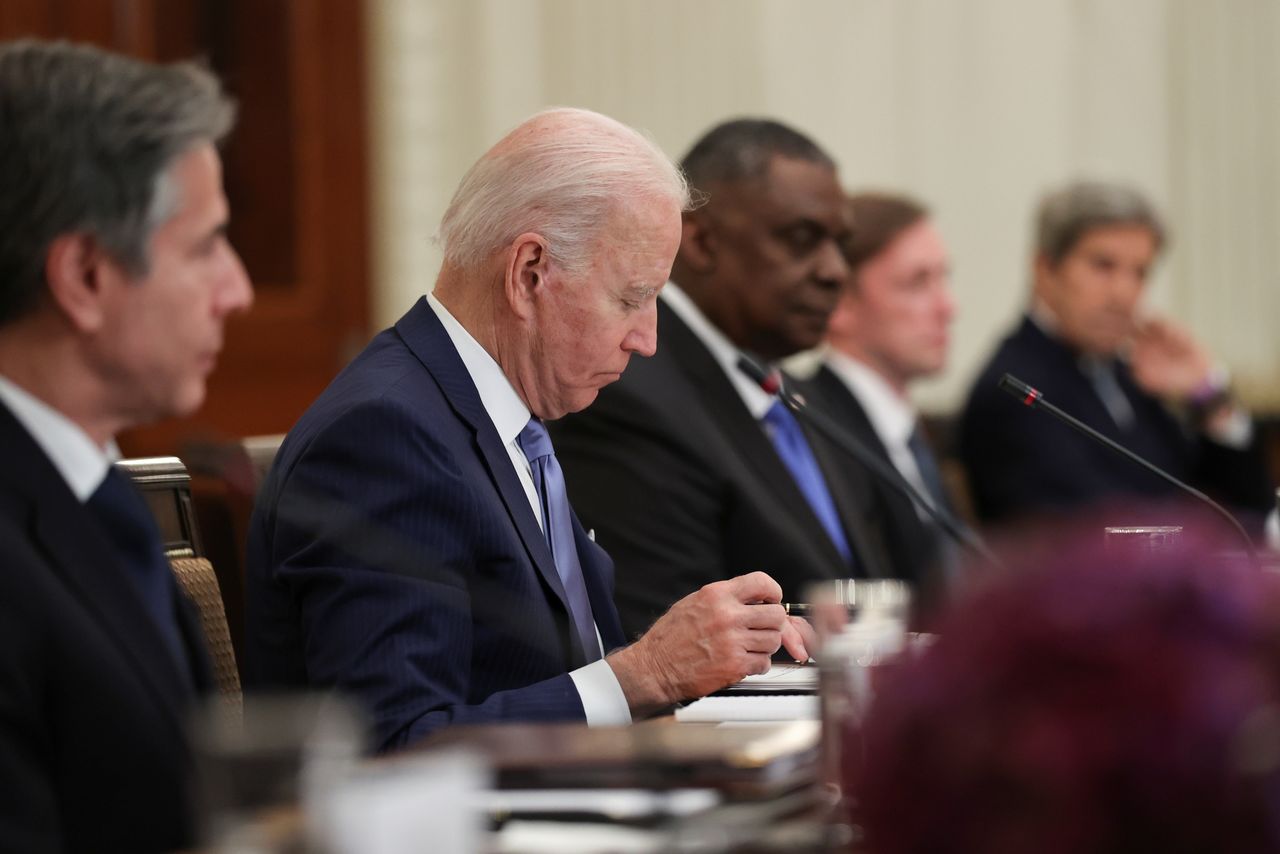 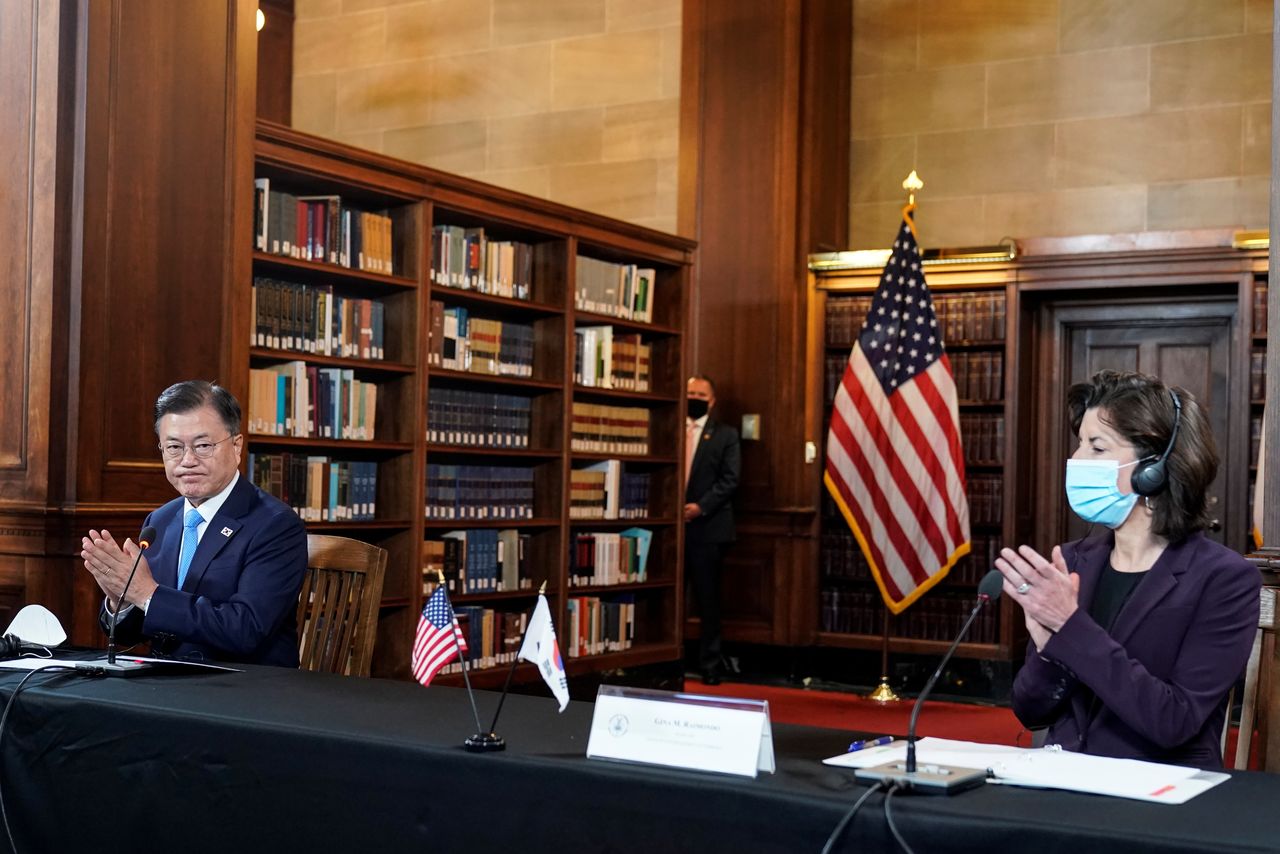 South Korean President Moon Jae-in speaks as U.S. Secretary of Commerce Gina Raimondo listens during a CEO meeting at the Department of Commerce in Washington, U.S., May 21, 2021. REUTERS/Joshua Roberts 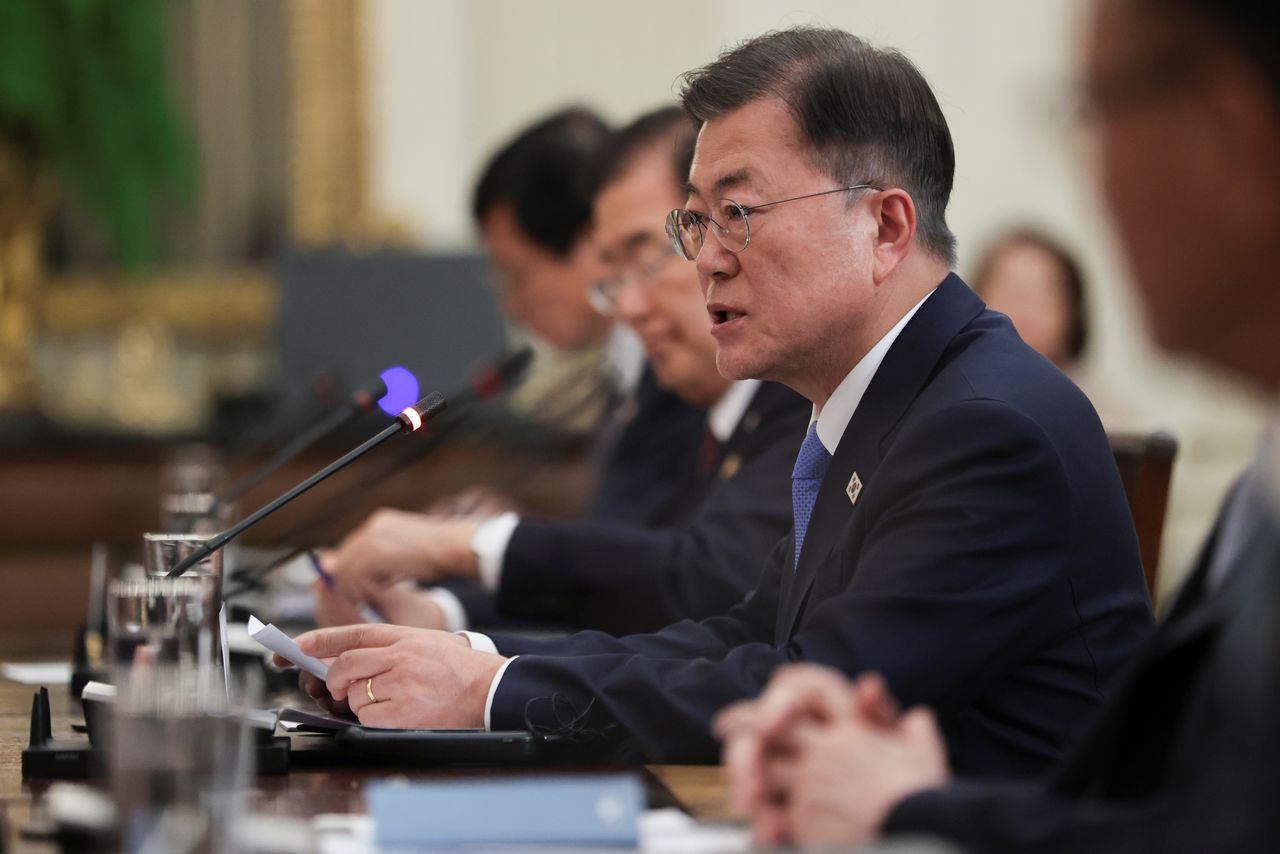 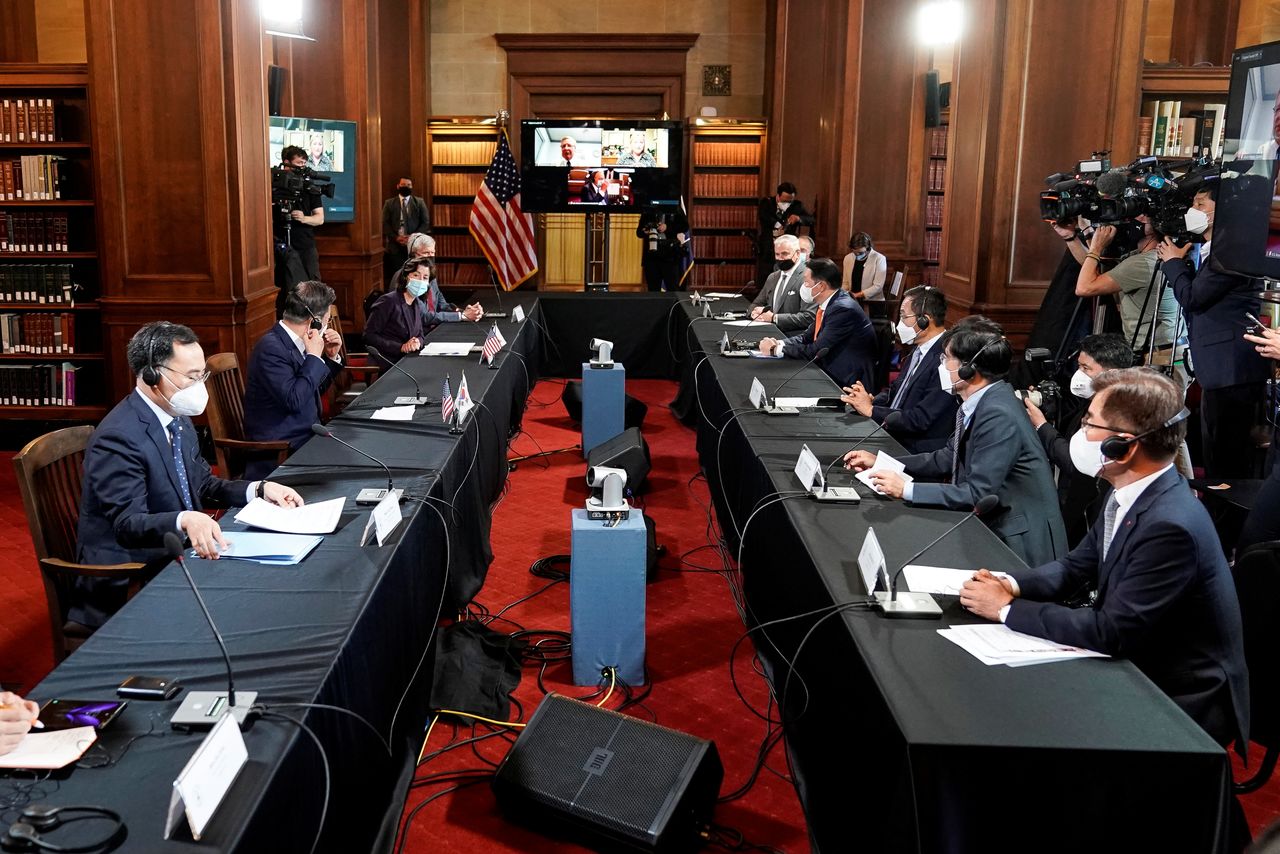