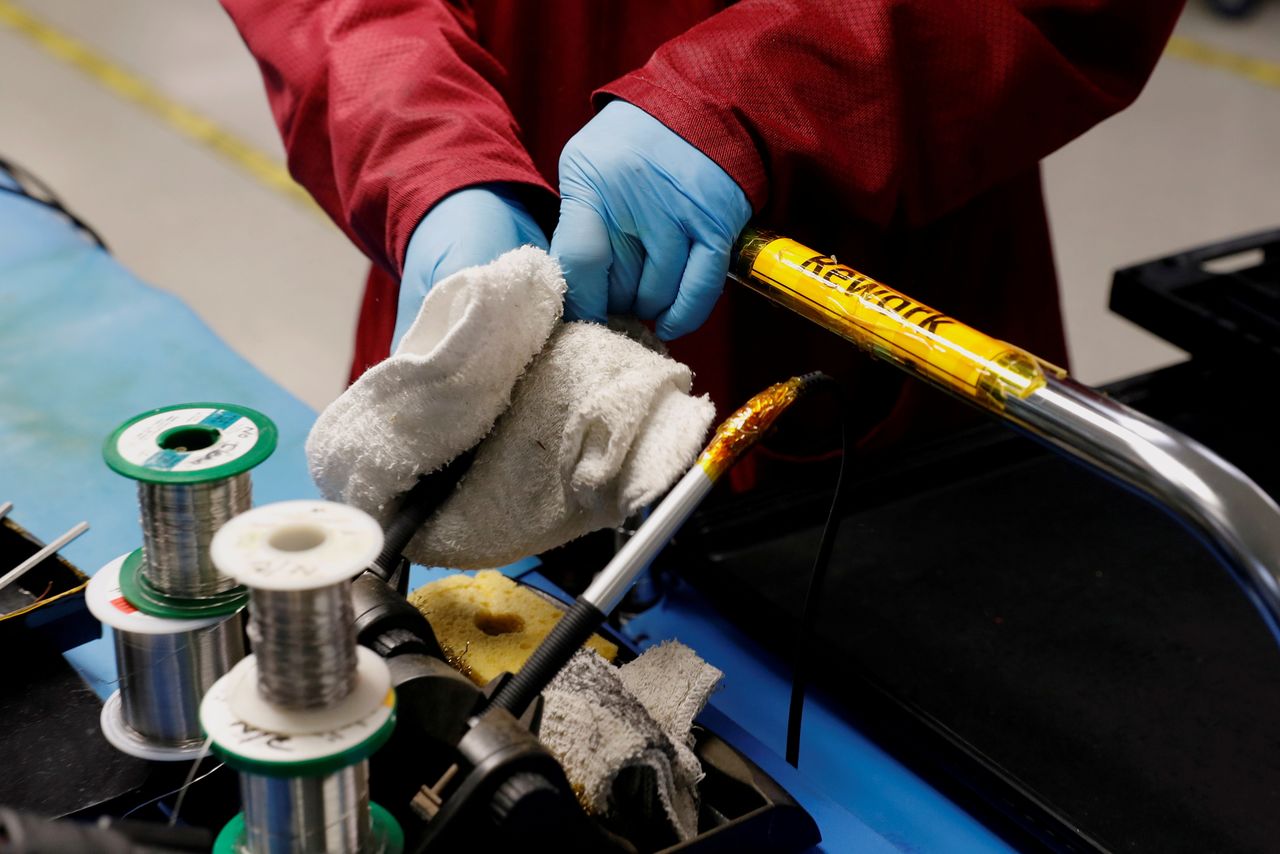 FILE PHOTO: A worker disinfects a work bench with a bleach mixture at the end of a shift at Green Circuits during the COVID-19 outbreak in San Jose, California, U.S., April 2, 2020. REUTERS/Stephen Lam/File Photo

(Reuters) - A foundry in Indiana couldn’t ship $1.6 million worth of metal parts to customers last month because it didn’t have enough workers to make them, while a Massachusetts plastics factory has outsourced nearly a quarter of its business to subcontractors to keep up with orders it otherwise couldn’t fill.

As economic growth revved up in recent months, employers rushed to pull back workers shed during the COVID-19 crisis. But it hasn’t been easy. The Labor Department’s latest jobs report showed decreases in manufacturing, retail, and courier services employment in April, sparking a heated and increasingly politicized debate over whether generous unemployment benefits were keeping workers on the sidelines.

The enhanced benefits, which include a $300 weekly supplement, pay more than most minimum wage jobs. They were extended to early September as part of the Biden administration's $1.9 trillion pandemic relief package approved in March. So far, more than 20 Republican-led states have moved to end the extra payments ahead of schedule citing local labor bottlenecks.

Other issues suspected of holding back workers include a childcare crunch and general anxiety about health risks, but no one - from Federal Reserve officials to corporate executives - can point to a definitive reason for the squeeze.

As Fed Vice Chair Richard Clarida remarked this week: "It may take more time to reopen a $20 trillion economy than it did to shut it down." (Graphic: U.S. factories struggle to keep up with demand, https://graphics.reuters.com/USA-ECONOMY/LABOR-SHORTAGE/yzdpxzwexpx/chart_eikon.jpg)

For many manufacturers, the labor problem is compounded by a surge in demand that began during the lockdowns as homebound Americans shifted consumption to goods from services. Factory backlogs hit record highs in each of the last two months, according to the Institute for Supply Management.

“I’ve never seen anything like this - ever - and I’ve been in manufacturing for 30 years,” said Dave Reilly, chief executive of United Solutions Inc, a plastics producer in Leominster, Massachusetts, that churns out Rubbermaid storage totes among other things.

Reilly has shifted work to two subcontractors, because he couldn’t meet orders with a staff that is short about 100 workers. United has two factories, one outside Boston and the other in Mississippi, which together normally employ almost 700 people. Both have lost people in recent months.

He estimates he’s about 25% short of the production he needs, although the company has been able to cover some of that by pulling from inventories as well as using the subcontractors. All his office staff and managers now spend time on the factory floor running molding machines.

Staff shortages are driving up operating costs. The company runs 24/7 and always struggles to find people to work the third, overnight shift. Staffing has grown so thin they are spending heavily on overtime to pull people onto that shift. Reilly said staffing problems, together with surging plastic resin costs, could soon make it unprofitable to run a third shift and force him to suspend it - even though that will magnify his problem meeting production goals.

Labor shortages are not yet causing shutdowns like those seen in auto plants running short of computer chips. Instead, they are forcing companies to delay shipments and miss opportunities for growth.

BCI Solutions Inc, a foundry in Bremen, Indiana, missed $1.6 million in shipments last month due to a lack of workers. “That may not sound like much, but it’s big for us,” said J.B. Brown, the family-owned company’s president. The missed shipments are equal to about 4% of annual sales of around $40 million.

BCI needs about 250 people to run production at the pace to fill all its orders - but Brown said he’s been steadily losing workers since the start of the year. He is now down to about 121.

Brown blames a variety of factors, and the $300 extra unemployment benefit is one, he said. Many of his workers have left for jobs in the recreational vehicle factories that are concentrated in his corner of Indiana. Those offer large production-based bonuses when business is strong, driving up wages during a boom. He raised starting wages by $2 an hour in February, to $15 an hour, and will boost them again to $20 an hour on Monday, which means pushing up his whole wage scale to avoid upsetting established workers.

“We talk to the companies around us - the ones just in a (half-mile) radius are now collectively short over 1,000 people,” said Brown. The town’s Dairy Queen has started closing one day a week, he said, due to lack of workers - to give its remaining staff time off.

Workers' migration to higher-paid jobs fits in with what the White House and some congressional Democrats have been saying: Pay people more, and they will come.

Jason Lippert, chief executive of LCI Industries, the largest parts supplier to the RV industry, also is losing workers to more lucrative jobs. “The RV makers have the highest wages in our region,” he said, as high as $50 an hour. “So generally, workers will look to jump from $20-an-hour jobs if they are not happy where they are at."

With margins at risk, employers are trying new strategies to lure people to their assembly lines, in addition to raising pay.

In Mississippi, where United Solutions has its second factory, the company is preparing to participate next month in a “drive-thru job fair.”

"They don't even have to get out of their car," said John Bergeron, United's human resources director. They just drive up to people waiting at tables representing different employers.