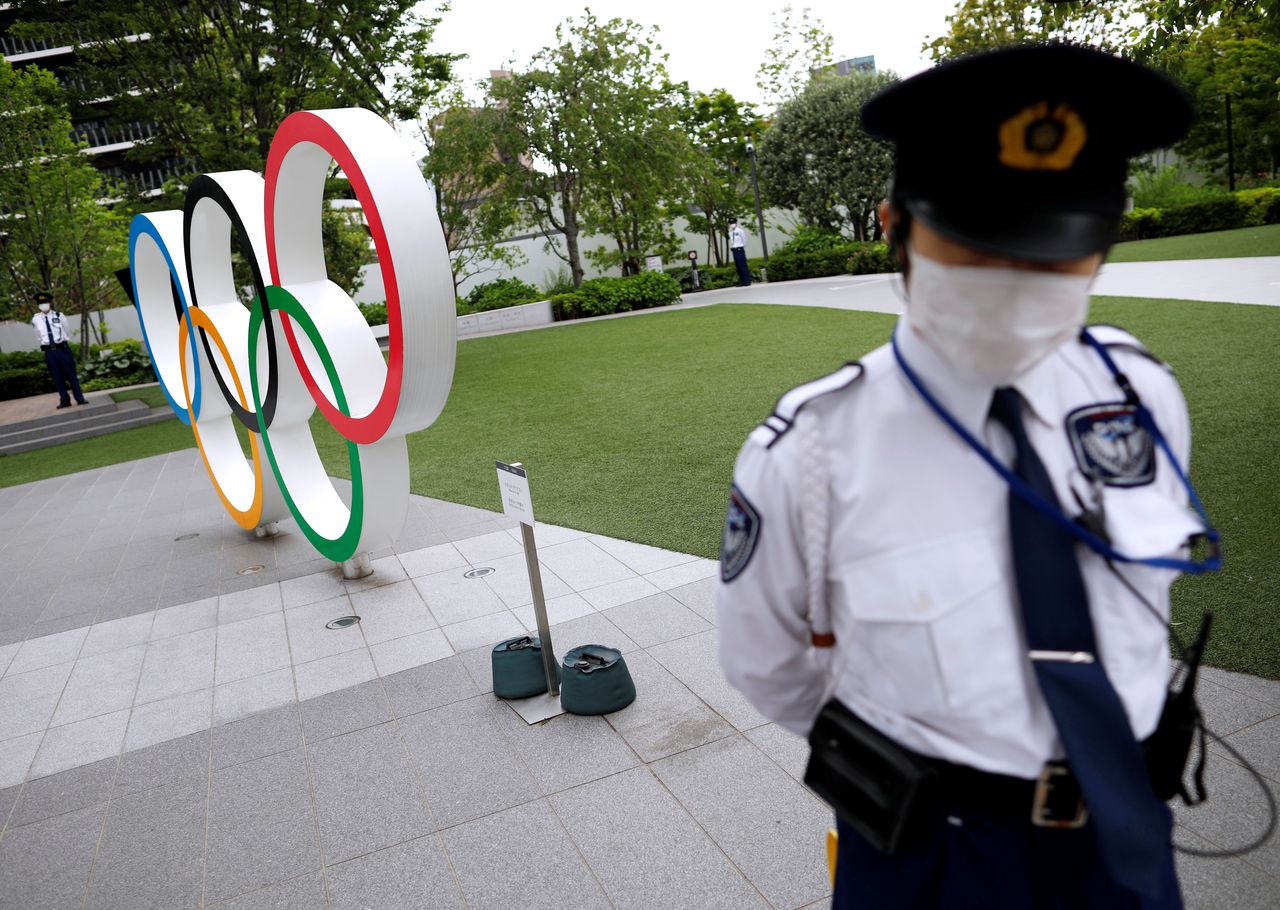 Security personnel stand guard near the Olympic rings monument during a rally by anti-Olympics protesters outside the Japanese Olympic Committee headquarters, amid the coronavirus disease (COVID-19) outbreak, in Tokyo, Japan May 18, 2021. REUTERS/Issei Kato

By Chang-Ran Kim and Aaron Sheldrick

TOKYO (Reuters) -Japanese tycoon Masayoshi Son warned of significant dangers around holding the Olympics in Tokyo, where the government on Monday kicked off a mass vaccination drive to catch up with other countries and ensure a "safe and secure" Games.

In a series of tweets, the influential SoftBank Group CEO expressed bewilderment and concern about the Tokyo Olympics, calling Japan a "vaccine laggard" and saying the slow inoculation drive less than two months before the start of the Games could put people's lives at risk.

"Currently more than 80% of people want the Olympics to be postponed or cancelled. Who and on what authority is it being forced through?" the billionaire executive, wrote in a tweet in Japanese over the weekend.

In a follow-up tweet late on Sunday, Son, who has 2.8 million followers, wrote: "Does the IOC (International Olympic Committee) have the power to decide that the Games would go ahead?

"There's talk about a huge penalty (if the Games are cancelled). But if 100,000 people from 200 countries descend on vaccine-laggard Japan and the mutant variant spreads, lives could be lost, subsidies could result if a state of emergency is called, and gross domestic product could fall. If we consider what the public has to endure, I think we could have a lot more to lose."

Son's tweets followed comments on Friday https://www.reuters.com/article/olympics-2020-idCNL2N2N80BL from IOC Vice President John Coates that the games would "absolutely" go ahead even if Tokyo was under COVID-19 restrictions.

Earlier this month, Son said in a TV interview he was "afraid" of having the Olympics, partly due to the severity of the pandemic in some countries.

Japan remains under state-of-emergency curbs https://www.reuters.com/world/asia-pacific/japan-approve-more-covid-19-vaccines-state-emergency-set-widen-2021-05-21 that have progressively been expanded as a fourth wave of infections rips through the population. Several sources with knowledge of the decision told Reuters the government was leaning towards extending the emergency status - set to end on May 31 in most regions, including Tokyo.

That contrasts with some other major economies that are beginning to ease lockdown measures as vaccinations race ahead. The Games begin on July 23.

Japan has delivered vaccinations to just 4.4% of its population, the slowest among the world's larger, rich countries, and has recorded 711,360 infections and 12,232 COVID-19 deaths from the virus.

The military began mass vaccinations in Tokyo and Osaka on Monday with the newly approved Moderna Inc dose. The medical system in the western city of Osaka is particularly feeling the pressure of surging infections.

The government has vowed to finish vaccinating all eligible elderly who wish to be inoculated by the end of July.

Japan's slow vaccination progress has kept the majority of the public opposed to holding the Games this year. A Reuters corporate survey found nearly 70% of Japanese firms also want the Olympics either cancelled or postponed.

While opinion polls show strong opposition to the Games, public protests have been limited.

On Sunday, a group of fewer than 20 gathered in Tokyo's Shinjuku district, calling on the government to cancel the Games, holding placards like "No Olympics".

Meanwhile, more aspiring Olympians saw their dreams dashed due to the virus that has killed more than three million worldwide.

A team of Australian skateboarders was disqualified from a qualifying event in the United States after three positive COVID-19 tests in their group.

IOC President Thomas Bach on the weekend added his voice to those insisting the Games proceed.

"We have to make some sacrifices to make this possible," Bach said.