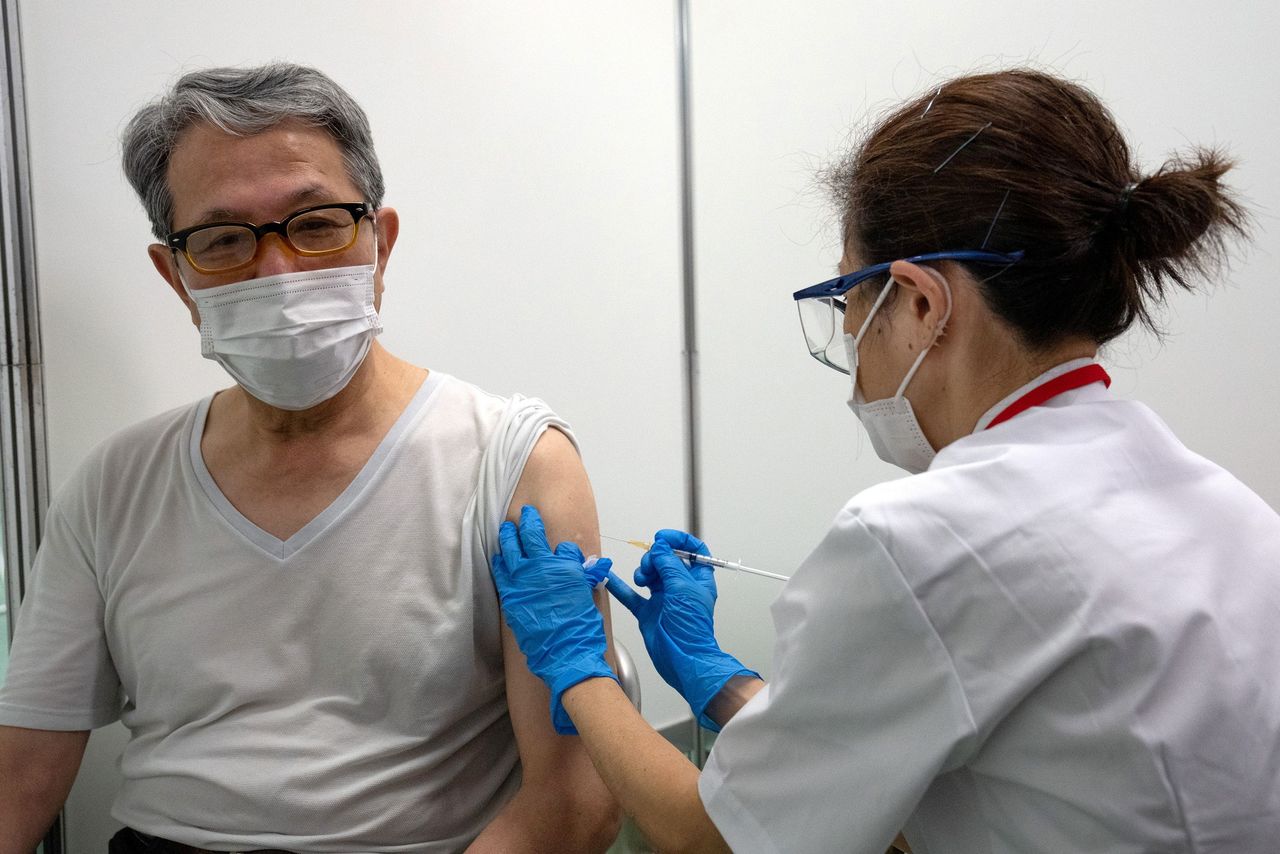 A pensioner receives the Moderna coronavirus disease (COVID-19) vaccine at the newly-opened mass vaccination centre in Tokyo, Japan, May 24, 2021. Carl Court/Pool via REUTERS

India's official tally of daily infections of the novel coronavirus fell to the lowest in nearly six weeks in the last 24 hours, offering hope a devastating second wave is ebbing, but government leaders said shortages of vaccines were a concern.

Barely 3% of the country's 1.3 billion people have been vaccinated, the lowest rate among the 10 countries with the most cases, leaving India and its ill-equipped healthcare system vulnerable to a potential third wave, experts say.

The Serum Institute of India, which is supplying the AstraZeneca vaccine, and local firm Bharat Biotech which is providing Covaxin, have both said they are ramping up production but the supply remains short of the millions of doses India needs.

Millions of vaccine doses are on their way to Taiwan, the health minister said on Tuesday, as he extended virus-related restrictions until the middle of June even though the trend in new infections is falling.

Having spent months keeping the virus at bay with life relatively normal compared with many other places, Taiwan is dealing with a spike in domestic infections, exacerbated by a low vaccination rate of only about 1% of its population.

Health Minister Chen Shih-chung said two million vaccine doses would arrive by the end of June and 10 million by the end of August.

Australia's second largest city Melbourne reinstated COVID-19 restrictions on Tuesday as authorities scrambled to find the missing link in a fresh outbreak, prompting New Zealand to pause a "travel bubble" with the state of Victoria.

Amid worries the cluster, which has grown to nine cases in two days, could spark a major outbreak, Victoria imposed social restrictions and made face masks mandatory in hotels, restaurants, and other indoor venues from 6 p.m. (0800 GMT) on Tuesday until June 4.

Vaccine hesitancy has risen sharply in Thailand, opinion polls show, just weeks away from the start of a mass inoculation programme and as the country fights its deadliest COVID-19 outbreak.

Reasons for the rise in vaccine hesitancy were unclear in the polls, but there are widespread complaints at government disorganisation, delays in getting vaccines and reliance on Sinovac and locally made AstraZeneca doses.

Thailand has reported 135,439 infections and 832 deaths since the pandemic began last year.

U.S. intelligence agencies are examining reports that researchers at a Chinese virology laboratory were seriously ill in 2019 a month before the first cases of COVID-19 were reported, according to U.S. government sources who cautioned that there is still no proof the disease originated at the lab.

It remained unclear whether these researchers were hospitalised or what their symptoms were, one of the sources said.