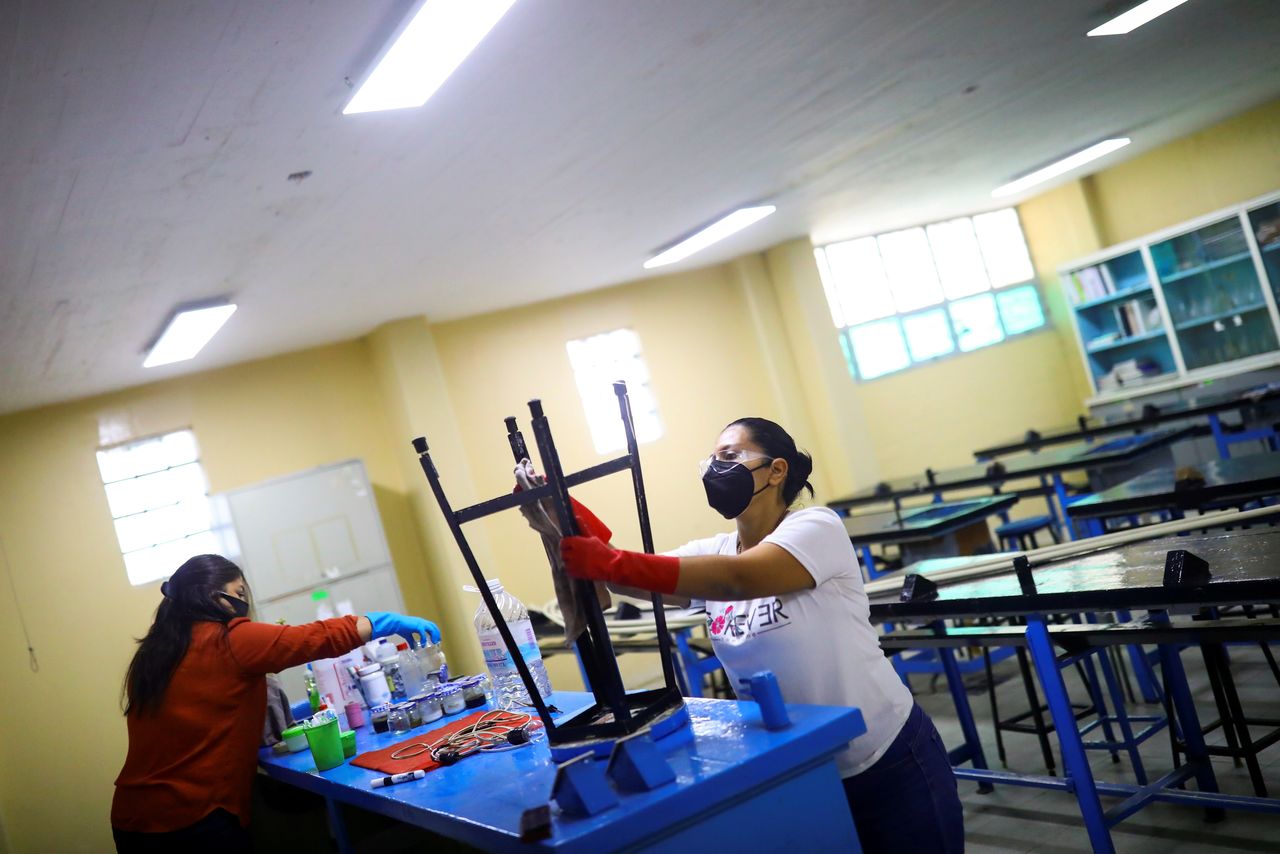 FILE PHOTO: Parents of students clean a room at Abraham Lincoln school before students go back to class during the reopening of activities amid the spread of the coronavirus disease (COVID-19) in Mexico City, Mexico May 22, 2021. REUTERS/Edgard Garrido/File Photo

British Prime Minister Boris Johnson's former chief adviser said his ex-boss failed in the COVID-19 crisis and ministers fell "disastrously short" of the standards the public had a right to expect.

With almost 128,000 deaths, the United Kingdom has the world's fifth worst official COVID-19 toll, and Johnson was slow to appreciate the significance of the threat from the virus in early 2020 as it spread from China towards Britain's shores.

Dominic Cummings told lawmakers that Johnson in early 2020 considered COVID a "scare story" like swine flu while many senior ministers, including the prime minister, were on holiday in February 2020, some skiing.

Taiwan directly accused China for the first time on Wednesday of blocking a deal with Germany's BioNTech for COVID-19 vaccines, in an escalating war of words after Beijing offered the shots to the island via a Chinese company.

Taiwan has millions of shots on order, from AstraZeneca and Moderna, but has received only slightly more than 700,000 to date, and has only been able to vaccinate about 1% of its population as cases surge.

While Taiwan has previously said it had been unable to sign a final contract with BioNTech, it had only implied that Chinese pressure was to blame.

Japanese newspaper publisher Asahi Shimbun, an official partner of the Tokyo 2020 Olympics, called for the Summer Games to be cancelled in an editorial on Wednesday, citing risks to public safety and strains on the medical system.

Several polls have shown the majority of the public is opposed to holding the Games this summer, concerned about tens of thousands of athletes and officials descending on a country that has mostly remained closed to foreigners since last year and where vaccinations have proceeded slowly.

Doctors' associations have protested against holding the Games, investors have talked up the benefits of shelving them, and maverick businessmen such as Masayoshi Son have called for cancelling them.

A lawyer for the European Union accused AstraZeneca on Wednesday of not having even tried to respect its contract with the 27-nation bloc for the supply of COVID-19 vaccines and of failing to warn it in time of large cuts to deliveries.

The EU took the Anglo-Swedish firm to court in April after the drugmaker said it would aim to deliver only 100 million doses of its vaccine by the end of June, instead of the 300 million foreseen in the supply contract.

The EU wants the company to deliver at least 120 million vaccines by the end of June.

Indian doctors on Wednesday decried the free distribution of an unproven remedy to COVID-19 patients by the state of Haryana as the maker of the herbal medicine faced a backlash over comments in which he said modern medicine had caused deaths.

The northern state, which is ruled by Prime Minister Narendra Modi's Bharatiya Janata Party, said this week it would hand out Coronil to COVID-19 patients. The ayurvedic medicine was launched by yoga guru Baba Ramdev's company Patanjali Ayurved last year to much fanfare as a COVID-19 cure.

The government later said the consumer goods company co-founded by Ramdev could not market the drug as a cure, and it needed to market it as an immunity booster.