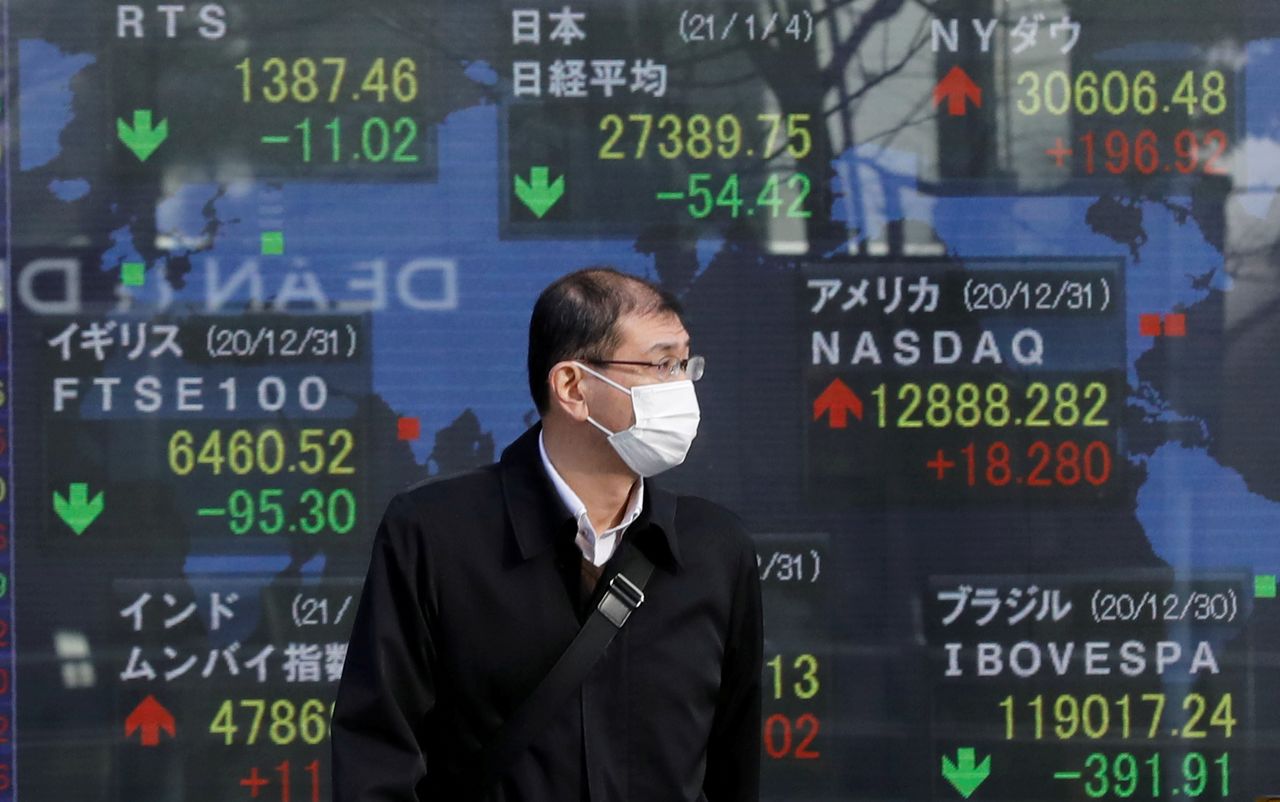 FILE PHOTO: A man wearing a facial mask, following the coronavirus disease (COVID-19) outbreak, stands in front of an electric board showing Nikkei (top in C) and other countries stock index outside a brokerage at a business district in Tokyo, Japan, January 4, 2021. REUTERS/Kim Kyung-Hoon/File Photo

LONDON (Reuters) - World equities were firmly on track to post a fourth straight month of gains on Monday, while the dollar struggled broadly ahead of European and U.S. data this week that will provide a clearer picture on the global economy's recovery path.

MSCI's broadest index of world stocks drifted 0.1% higher, putting the gauge on track for a 1.4% gain for May. It is the longest monthly rising streak for the index since August 2020, when it marked a five-month run of gains, according to Refinitiv data.

But U.S. stock futures <ESc1> edged lower and European cash equities trading was subdued on Monday due to holidays in the United States and Britain, with benchmark indexes sticking to well-worn ranges.

May has proven to be a decent month for asset markets, but policymakers are increasingly faced with the dilemma that inflation is running hot while the underlying structural economy is still struggling to gain traction.

The main event of the week will be U.S. payrolls on Friday with median forecasts at 650,000, but the outcome is uncertain following April's unexpectedly weak 266,000 gain.

Although U.S. inflation data last week was above estimates, another big miss on the jobs front would heap pressure on the Fed to postpone plans to wind down its stimulus.

"The question is, therefore, whether by September the Federal Reserve will be in a position to announce a tapering of its bond purchases starting next year, and the odds are quite decent though it might be delayed to December," said Sebastien Galy, a strategist at Societe Generale.

The Fed next meets on June 16, and this week will be the last chance for members to discuss policy before a pre-meeting blackout period starts on June 5.

So far, investors have taken the Fed at its word that the labour market needs to improve a lot more before it speaks of tapering. That helped yields on U.S. 10-year notes ease to 1.58% with Fed funds futures pricing in a first rate hike by the first quarter of 2023.

Among central banks debating inflation trends, the European Central Bank is perhaps the outlier with both policymakers and investors on the same page when it comes to expecting a return to below-target inflation, according to Ulrich Leuchtmann, head of FX and commodity research at Commerzbank.

That was evident in the bond markets too, where yields on benchmark German debt remained well below recent highs.

A dovish Fed has also put the greenback under pressure against its rivals with the dollar recouping some of its losses after hitting a three-year low against the Chinese yuan.

The yuan was the big mover in global currency markets after policymakers directed financial institutions to hold more foreign exchange in reserve, a move that analysts say was aimed at curbing yuan strength.

In the offshore markets, the yuan weakened 0.2% versus the U.S. dollar with analysts at ING saying that Beijing's latest move will slow the currency's rise but will not halt it completely.

Concerns about global inflation and slowing growth have proved to be a boon for gold, with prices for the yellow metal rising 8% this month, vaulting comfortably above $1,900.

Oil prices were firm after gaining more than 5% last week to reach two-year closing highs as expectations of a rebound in global demand outweighed concerns about more supply from Iran once sanctions are lifted. [O/R]

All eyes will be on OPEC this week as it reviews its supply agreement, and any hint of an increase in output could pressure prices.

Unusually quiet cryptocurrencies showed some signs of volatility in holiday-stricken trading with bitcoin rising 4% to $37,000 while its smaller rival Ethereum climbed 8% to $2,578.