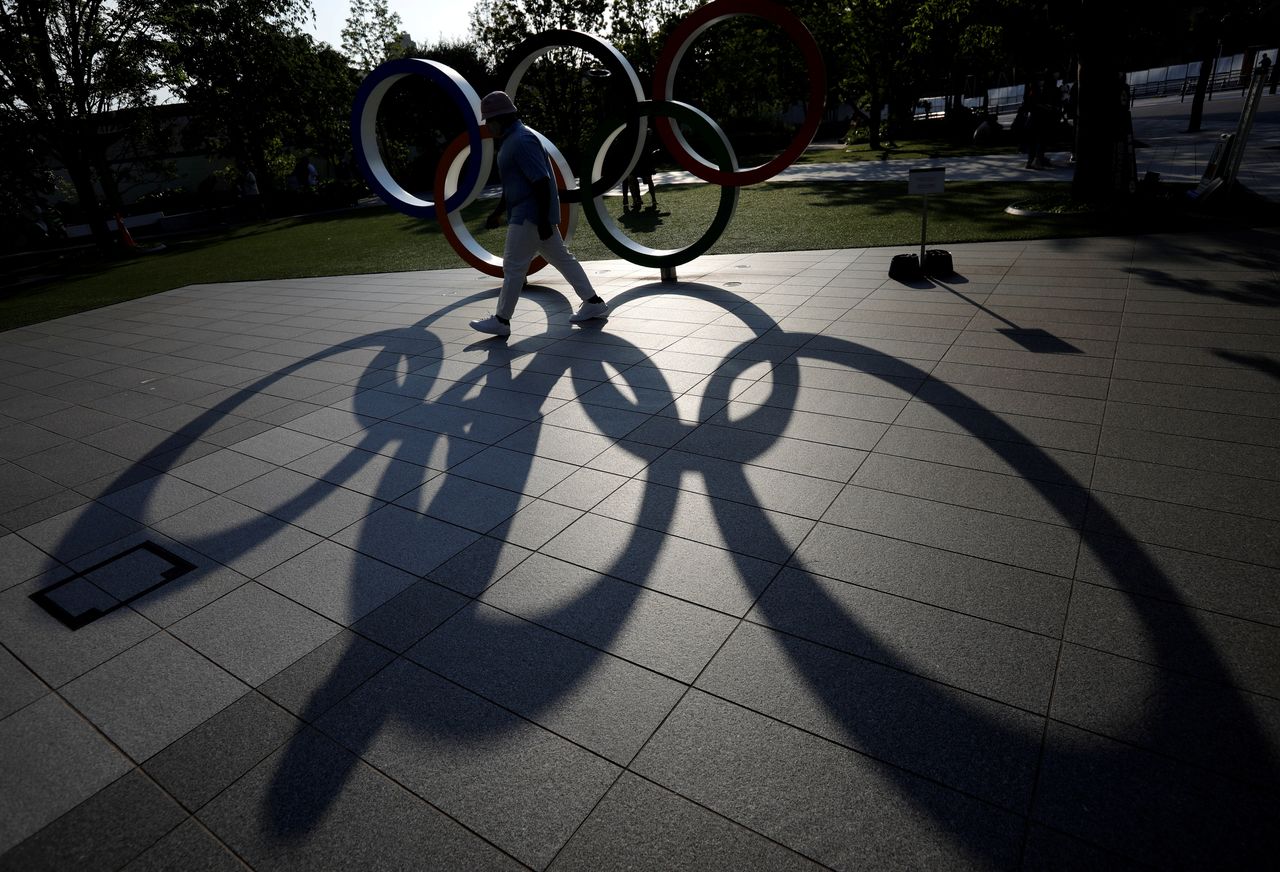 FILE PHOTO: A visitor and the Olympic Rings monument cast shadows on the ground outside the Japan Olympic Committee (JOC) headquarters near the National Stadium, the main stadium for the 2020 Tokyo Olympic Games that have been postponed to 2021 due to the coronavirus disease (COVID-19) outbreak, in Tokyo, Japan May 30, 2021. REUTERS/Issei Kato

TOKYO (Reuters) - Ahead of the Tokyo 2020 Olympics, the Japanese city of Kamo spent 70 million yen ($640,000) on horizontal bars, gymnastic mats and other upgrades to training facilities for 42 Russian gymnasts and coaches who now won't be coming.

The team scrapped plans for pre-Olympics training in Japan because of the resurgent COVID-19 pandemic, local officials said. Officials in the northwestern city of 25,000 say they regret the lost opportunity to host the team, even more than the money spent.

The Games, now less than eight weeks away after being delayed by a year, have been upended by COVID-19. Foreign spectators will not be allowed, and more than 100 municipalities have cancelled plans to host overseas teams.

"Local kids who could be future star gymnasts were disappointed to miss the opportunity to meet the Russian gymnasts," Kamo official Hirokazu Suzuki told Reuters.

Although there is little Olympic buzz in host city Tokyo, which is under a state of emergency because of the pandemic, in smaller places like Kamo, which had been planning the camp since 2019, the disappointment is perhaps more palpable.

Most of the cancellations so far have been in the 500 or so municipalities involved in the Olympics "host town" programme, in which foreign teams base their pre-Games training in Japanese facilities.

In some cases, such as Australia's judo team, the teams pulled out over safety concerns. In others, such as a delegation from Cuba set to stay in Higashimatsuyama city north of Tokyo, the municipalities decided not to host.

Organisers say the Games will be held safely. Several opinion polls have shown most Japanese people want the event to be cancelled or postponed again.

Municipalities apart from Tokyo were expected to see a boost of about $110 billion through 2030 from the Games, the Tokyo Metropolitan Government said in a March 2017 estimate.

"Training camps will give a huge impulse to the economies of towns and cities where they are held, but that is being lost," said Katsuhiro Miyamoto, an emeritus professor of economics at Kansai University who studies the economic impact of the Olympics.

Officials in Narita, east of Tokyo, were caught by surprise when the United States' track and field team informed them it had decided to pull out of planned a training camp.

About 120 athletes and staff, including star sprinter Justin Gatlin, were set to come for the camp, said Kentaro Abe, a municipal official in charge of host town projects.

Narita's sports relationship with the United States started in 2015, when it hosted the U.S. training camp before the world athletics championships in Beijing.

"It doesn't mean that our efforts to promote sport exchange between Japan and the United States came to nothing," Abe told Reuters, adding that city would look to continue the relationship.

In the central city of Toyota, home to the carmaker and Olympic sponsor Toyota Motor Corp, Canadian swimmers and coaches pulled out of pre-Olympics training scheduled to be held over about three weeks in July.

Such cancellations could add to the pain for towns and regions that are already smarting from a drop-off in tourism.

At her hotel in western Izumisano city, Eriko Tsujino worries she could lose about 60 bookings from Mongolian and Ugandan national teams if the athletes ditch plans to train in Japan.

"If they were to cancel at the last minute, it would cause a huge loss," she told Reuters, saying the bookings had still not been confirmed because of the state of emergency.

After the Russians cancelled their camp in Kamo, officials there decided at the last minute to host a much smaller Portuguese delegation of one female artistic gymnast and two accompanying staff, Suzuki said.

But the city also sought to keep friendly relations with the Russian gymnasts, asking kids and other locals to show them support with making video messages and letters.