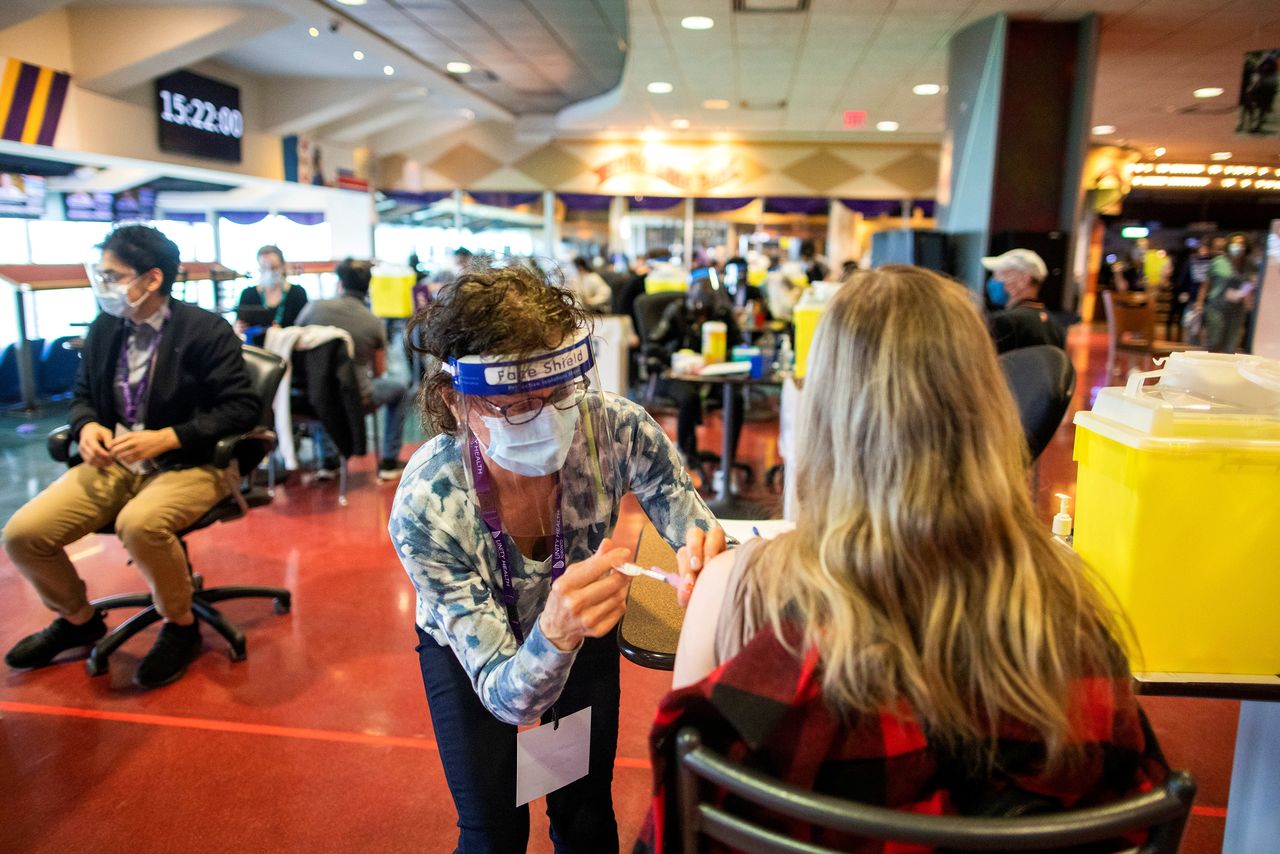 FILE PHOTO: A healthcare worker administers the Pfizer/BioNTech coronavirus disease (COVID-19) vaccine, which was authorized by Canada to be used for children aged 12 to 15, at Woodbine Racetrack pop-up vaccine clinic in Toronto, Ontario, Canada May 5, 2021. REUTERS/Carlos Osorio/File Photo

(Reuters) - The European Commission on Friday authorized Pfizer-BioNTech's COVID-19 vaccine for use in children as young as 12, paving the way for a broader roll-out in the EU after similar clearances in the United States and Canada.

However, vaccinating adolescents in affluent countries while many parts of the world await doses for older and more vulnerable people has raised concerns, with the World Health Organisation urging rich countries to give shots to the COVAX scheme instead.

The following is a list of some countries which have approved or are considering vaccinating children:

* France will start vaccinating teenagers from age 12 with the Pfizer's vaccine on June 15, the government said on June 2 as it looks to avoid schools closures in September.

* Germany plans to offer a first shot to children aged 12-16 from June 7, while Poland would offer shots to those aged 12-15 the same day.

* Italy on May 31 approved extending the use of the Pfizer-BioNTech vaccine to 12-15 year olds.

* Estonia could start vaccinating teenagers by the autumn, public broadcaster ERR reported, citing the head of the government's COVID-19 council.

* Austria aims to have over 340,000 children aged 12-15 vaccinated by the end of August, according to news site Vindobona.

* Pfizer said in mid-May it was seeking British approval to use its vaccine for 12-15-year-olds.

* Norway may consider the Pfizer vaccine for children who have a high risk of becoming seriously ill with COVID-19, VG newspaper reported.

* Switzerland's health watchdog said in early May Pfizer had sought approval for its shot in children aged 12-15.

* Israel has given the green light to vaccinate 12- to 15-year-olds and is set to begin next week, its pandemic-response coordinator said.

* Dubai said on June 1 it had started offering the Pfizer-BioNTech vaccine to 12-15-year-olds, after the United Arab Emirates approved the shot for emergency use for the same age group in mid-May.

* Singapore opened up its vaccination programme to adolescents aged 12-18 from June 1.

* Japan on May 28 approved the use of Pfizer's vaccine for those aged 12 and above.

* The Philippines on May 26 decided to allow the Pfizer-BioNTech's vaccine for emergency use in children aged 12-15.

* Hong Kong will open its COVID-19 vaccine scheme to children over the age of 12, the government said.

* Chile on May 31 approved use of Pfizer-BioNTech's vaccine for 12-16-year-olds.

* U.S. states began inoculate young adolescents in mid-May after its Centers for Disease Control and Prevention approved Pfizer's shot for those aged 12-15.

* Canada in early May approved use of Pfizer's vaccine for use in children aged 12-15.