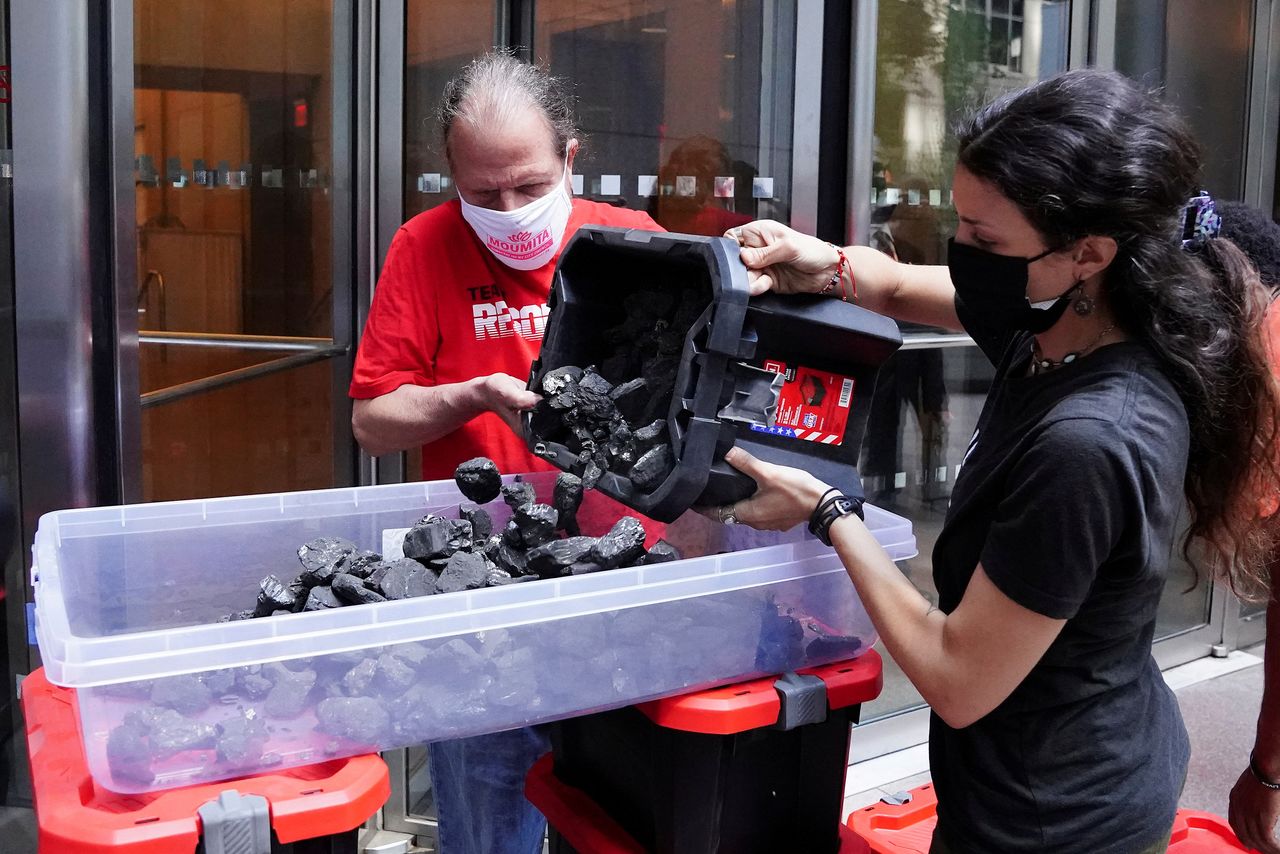 FILE PHOTO: People put coal in a container as they protest against BlackRock investing in coal and tar sands by blocking their front door with coal at their headquarters in the Manhattan borough of New York City, New York, U.S., May 25, 2021. REUTERS/Carlo Allegri/File Photo

By Ross Kerber and Jessica DiNapoli

(Reuters) - A new generation of executives at the world's biggest asset managers is helping drive an uprising against Corporate America that environmental and social justice activists have long campaigned for.

The big mutual fund firms, whose stock holdings amount to trillions of dollars, used to be loyal members of the corporate establishment. They cast their votes at shareholder meetings largely as instructed by the management of companies in their portfolios, on issues ranging from CEO pay to carbon emission reporting. They rarely discussed their decisions publicly.

This year marks a sea change as top funds throw more of their weight behind investor challenges to companies on environmental, social and governance (ESG) issues and put companies on notice by often choosing to publicize how and why they voted, a Reuters review of voting results and fund firms' new disclosures shows.

A record 14 S&P 500 companies had more than 50% of investors reject their executive pay packages as of June 1, according to corporate governance consultant ISS Corporate Solutions. Investors voted down a total of 12 CEO pay plans in the entirety of 2020. About 28% of S&P 500 companies have not yet held their annual meetings this year.

This trend culminated in the three largest index fund firms - BlackRock Inc, State Street Corp and Vanguard Group - disclosing last week they had backed a successful board challenge against Exxon Mobil Corp, one of their biggest holdings, over dissatisfaction with its efforts to diversify away from fossil fuels.

The mutual fund firms are increasingly relying on ESG-focused funds they manage for a part of their fee revenue. They are also being prodded by their own investors, including state pension funds, to take a more active stance. Some of them seized on calls for social reform following the May 2020 murder of George Floyd, a Black man whose death while in Minneapolis police custody unleashed a national reckoning over racial injustice.

Big fund managers "have gotten the message that this is important to investors," said Andrew Collins, who oversees responsible investing for the $31 billion San Francisco Employees' Retirement System, whose fund managers include BlackRock.

Many of the executives driving the changes are newcomers to the big funds. Sandy Boss, who BlackRock recruited from the Bank of England last year as its new global head of investment stewardship, is pressing companies to do more on issues such as climate change and boardroom diversity. BlackRock has made public its voting decisions on more than 80 companies since 2020, and frequently criticizes corporate governance lapses under Boss.

BlackRock declined to make Boss available for an interview, but in a statement sent by a company representative Boss said the new disclosures - some of which predate her arrival - are meant "to help keep our clients informed about the work we do on their behalf to encourage the governance and sustainable business practices that support long-term financial performance."

John Galloway, a former White House official who became Boss' counterpart at Vanguard last year, has been naming and shaming companies he considers ESG laggards. Vanguard declined to make him available for an interview, but Galloway has said previously he wants to make Vanguard's views transparent.

Another new ESG chief, Jessica Ground, joined American Funds parent Capital Group last year after spending 23 years at investment manager Schroders Plc. Capital wrote in February to about 1,600 portfolio companies to push for boardroom diversity and ask for workforce demographic data. ESG issues are "fundamental to the long-term success of companies we invest in," Ground said in an emailed statement sent by a Capital representative.

Caitlin McSherry, who joined Neuberger Berman last year as director of investment stewardship after four years with State Street, said she planned to double to 60 the memos her firm will publish in 2021 on how it voted on corporate ballots, to help boards understand what investors expect of them. She added that 2020 brought many ESG topics such as workplace safety, diversity and supply chain management to the fore.

James McRitchie, a private investor and prolific filer of shareholder resolutions challenging companies, said the recent push by the big funds to publicize their displeasure with ESG failures at companies has encouraged large and small investment firms to vote alongside them.

Among major companies that lost votes this year was railroad operator Union Pacific Corp, whose board was rebuked by 86% of shareholder votes cast that backed a call to disclose diversity information about its workforce. A Union Pacific spokeswoman said it will soon release the workforce details sought by investors.

In another case of pushback, on May 4 a majority of shareholders at industrial conglomerate General Electric Co rejected the compensation of CEO Larry Culp, worth as much as $230 million. Critics included BlackRock and Neuberger Berman, their new disclosures showed. A GE representative said the company would gather additional feedback from investors in evaluating its executive compensation program.

Detailed filings showing how specific fund firms voted in annual shareholder meetings of companies will not be available until August.

VOTES LEAD TO CHANGES To be sure, the big funds remain selective in the battles they pick, and most companies have not yet faced such pressure.

Yet some investment managers view this as only the start of a scramble on Wall Street for firms to buff up their ESG credentials. "If you see BlackRock significantly improving its record, and you are Vanguard, you can't lag too far behind," said Tim Smith, a director for investment management firm Boston Trust Walden, which often submits shareholder resolutions opposed by management.

Many of the resolutions backed by big funds that challenge companies are nonbinding. Still, they often lead to companies heeding investor concerns.

About half the companies that received at least 30% of votes in support of environmental and social resolutions responded by making the changes that had been sought, an analysis of 74 investor resolutions from 2017 to 2019 carried out by BlackRock shows. Another quarter of companies partially met the requests associated with the shareholder proposals, according to the asset manager.

Paul Moroz, chief investment officer of Mawer Investment Management, which has $69 billion in assets under management, said growing interest among younger investors in companies' records on climate change or workforce diversity will only up the pressure on fund firms to challenge companies more on ESG matters.

"Younger investors want to see ESG factors incorporated into their portfolios," said Moroz. Top fund firms, he said, "have to evolve with their client base."

(Reporting by Ross Kerber in Boston and Jessica DiNapoli in New York; Editing by Greg Roumeliotis and Matthew Lewis)