By David Milliken and Kate Holton

LONDON (Reuters) -The United States, Britain and other large, rich nations reached a landmark deal on Saturday to squeeze more money out of multinational companies such as Amazon and Google and reduce their incentive to shift profits to low-tax offshore havens.

Hundreds of billions of dollars could flow into the coffers of governments left cash-strapped by the COVID-19 pandemic after the Group of Seven (G7) advanced economies agreed to back a minimum global corporate tax rate of at least 15%.

Facebook said it expected it would have to pay more tax, in more countries, as a result of the deal, which comes after eight years of talks that gained fresh impetus in recent months after proposals from U.S. President Joe Biden's new administration.

The meeting, hosted at an ornate 19th-century mansion near Buckingham Palace in central London, was the first time finance ministers have met face-to-face since the start of the pandemic.

U.S. Treasury Secretary Janet Yellen said the "significant, unprecedented commitment" would end what she called a race to the bottom on global taxation.

Yellen also saw the G7 meeting as marking a return to multilateralism under Biden and a contrast to the approach of U.S. President Donald Trump, who alienated many U.S. allies.

"What I've seen during my time at this G7 is deep collaboration and a desire to coordinate and address a much broader range of global problems," she said.

Ministers also agreed to move towards making companies declare their environmental impact in a more standard way so investors can decided more easily whether to fund them, a key goal for Britain.

Current global tax rules date back to the 1920s and struggle with multinational tech giants that sell services remotely and attribute much of their profits to intellectual property held in low-tax jurisdictions.

But Italy, which will seek wider international backing for the plans at a meeting of the G20 in Venice next month, said the proposals were not just aimed at U.S. firms.

"There is broad agreement that these two things go hand in hand," she said.

Key details remain to be negotiated over the coming months. Saturday's agreement says only "the largest and most profitable multinational enterprises" would be affected.

European countries had been concerned that this could exclude Amazon - which has lower profit margins than most tech companies - but Yellen said she expected it would be included.

How tax revenues will be split is not finalised either, and any deal will also need to pass the U.S. Congress.

Some campaign groups also condemned what they saw as a lack of ambition. "They are setting the bar so low that companies can just step over it," Oxfam's head of inequality policy, Max Lawson, said.

But Irish finance minister Paschal Donohoe, whose country is potentially affected because of its 12.5% tax rate, said any global deal also needed to take account of smaller nations. 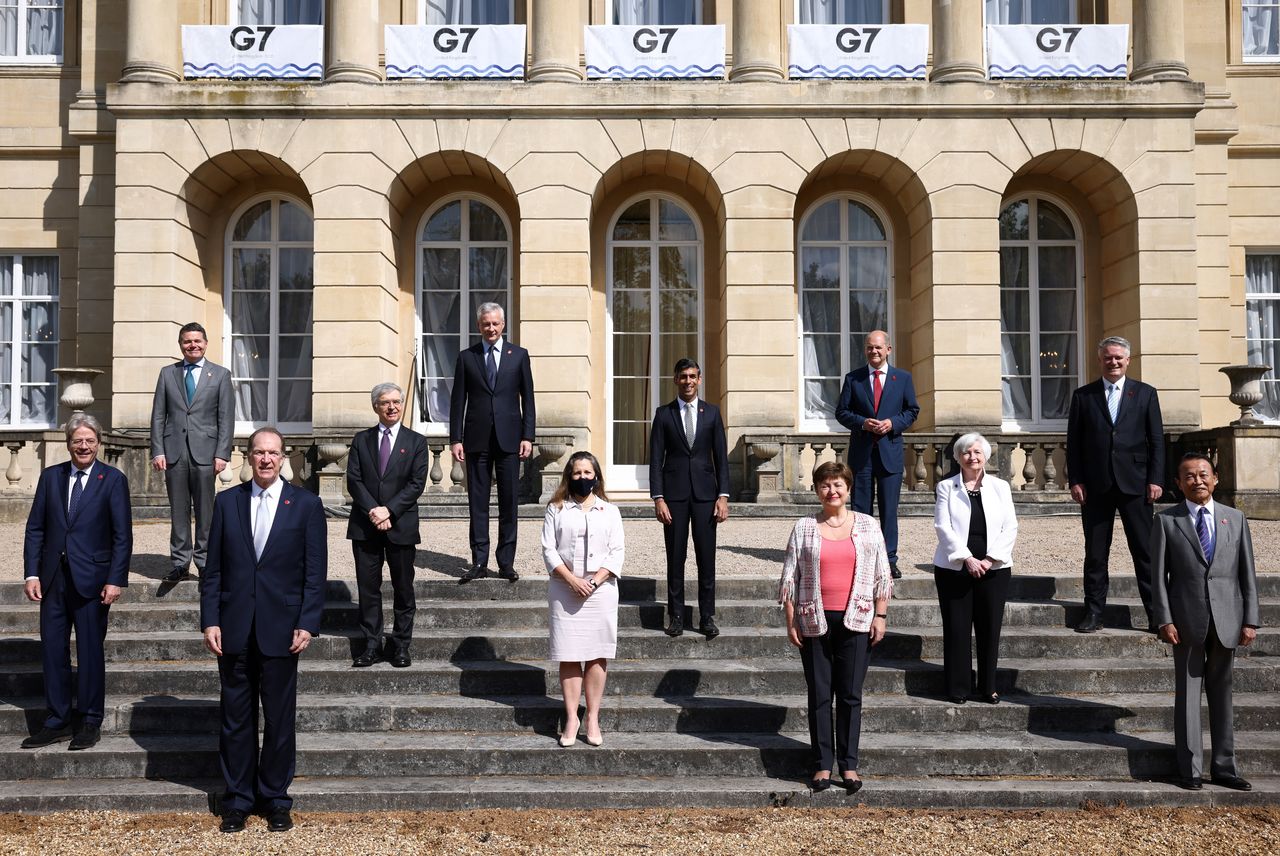 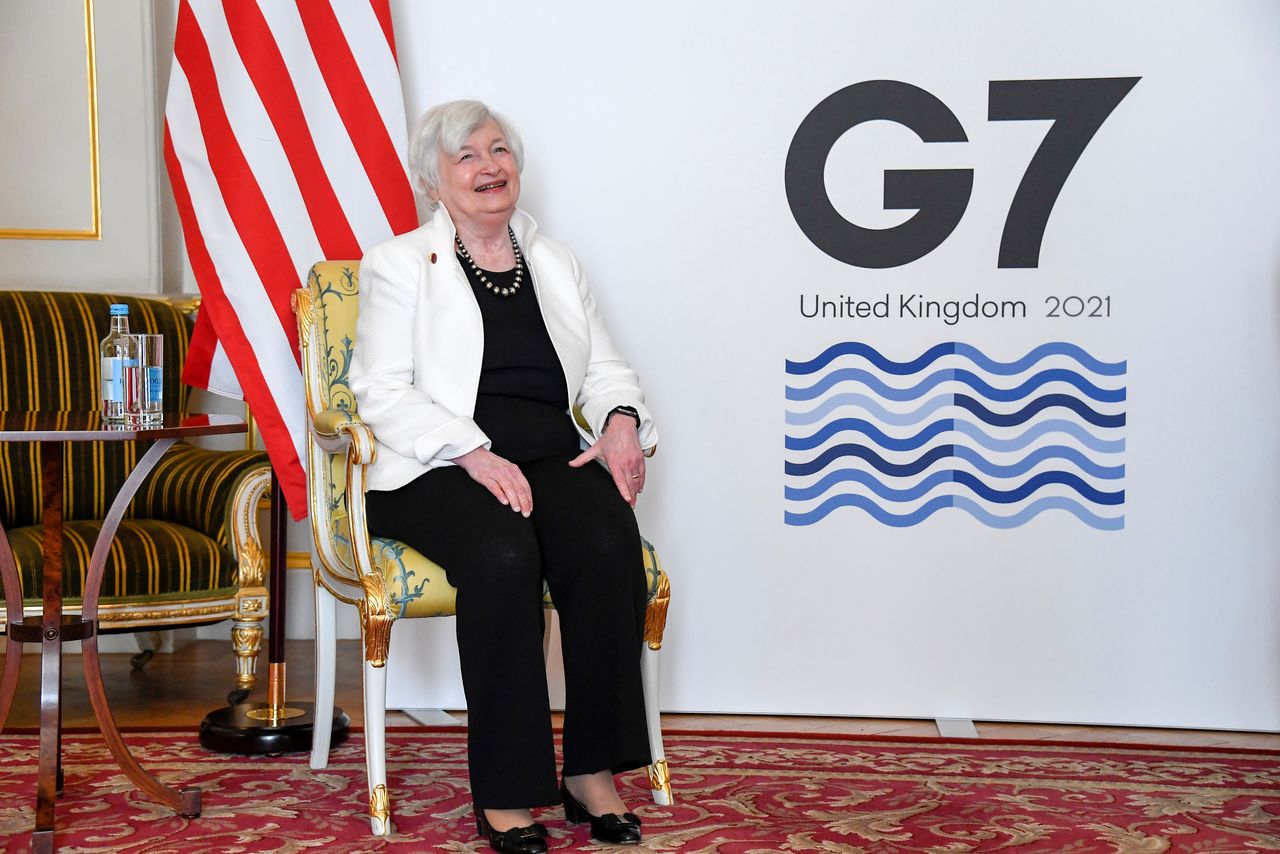 U.S. Treasury Secretary Janet Yellen poses as finance ministers from across the G7 nations meet at Lancaster House in London, Britain June 5, 2021 ahead of the G7 leaders' summit. Alberto Pezzali/Pool via REUTERS 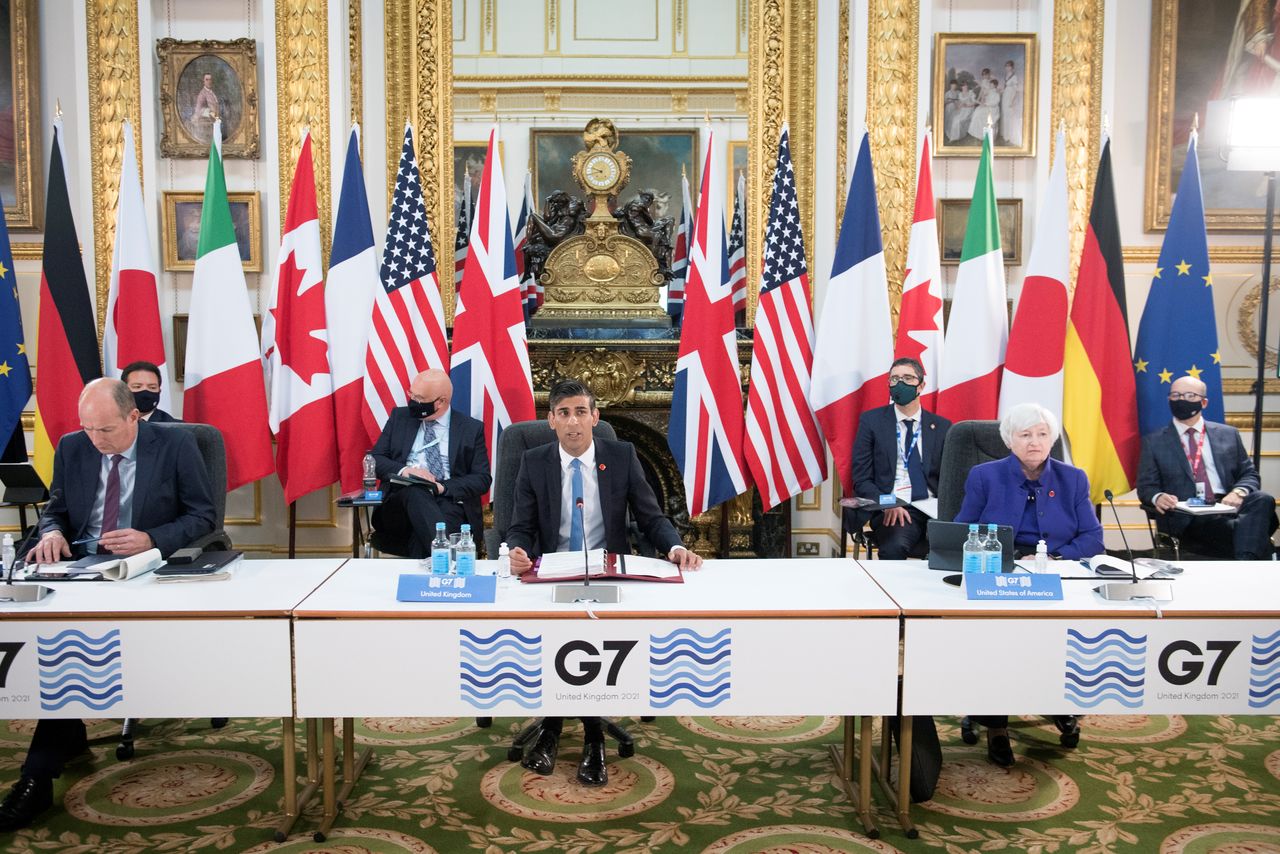 FILE PHOTO: Britain's Chancellor of the Exchequer Rishi Sunak speaks at a meeting of finance ministers from across the G7 nations ahead of the G7 leaders' summit, at Lancaster House in London, Britain June 4, 2021. Stefan Rousseau/PA Wire/Pool via REUTERS 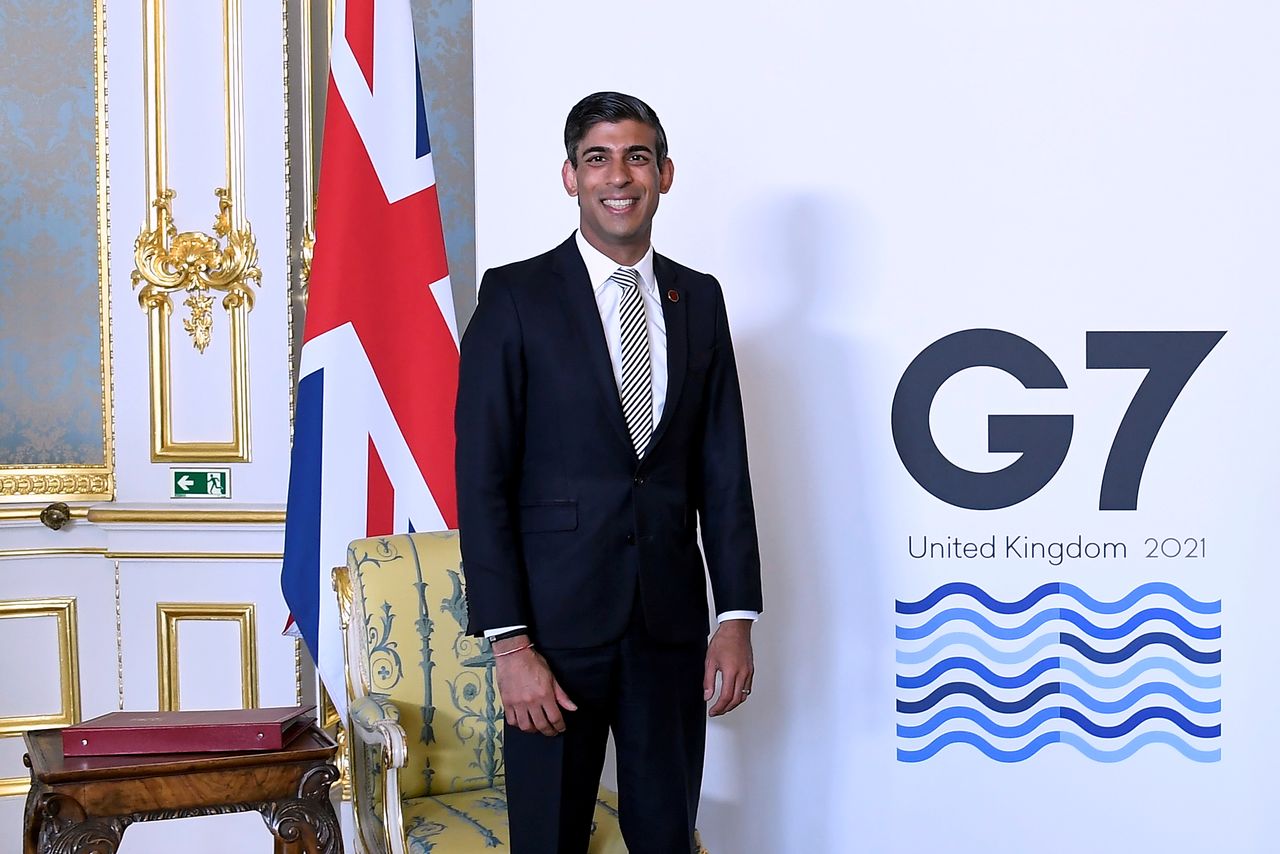 Britain's Chancellor of the Exchequer Rishi Sunak, poses as finance ministers from across the G7 nations meet at Lancaster House in London, Britain June 5, 2021 ahead of the G7 leaders' summit. Alberto Pezzali/Pool via REUTERS 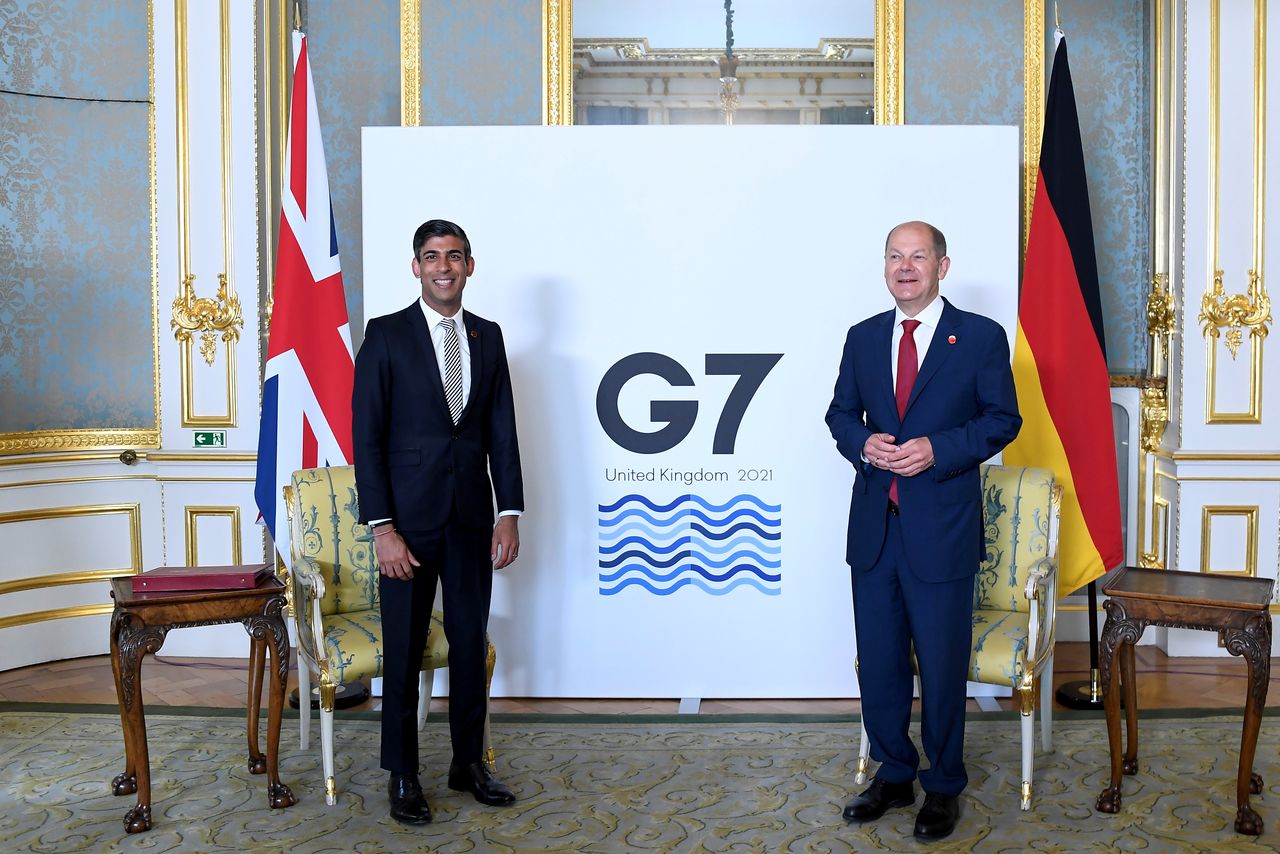 Britain's Chancellor of the Exchequer Rishi Sunak poses with Germany's Finance Minister Olaf Sholz as finance ministers from across the G7 nations meet at Lancaster House in London, Britain June 5, 2021 ahead of the G7 leaders' summit. Alberto Pezzali/Pool via REUTERS