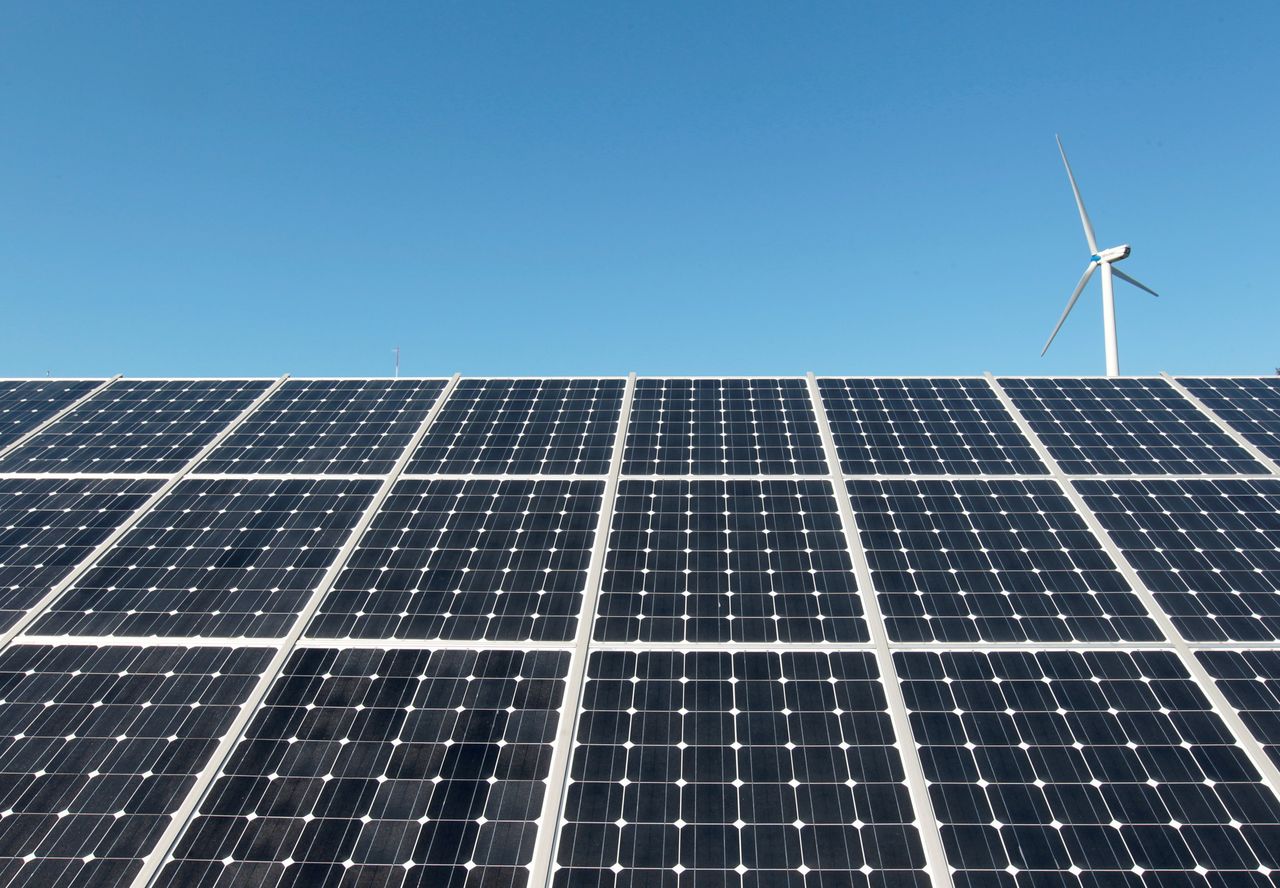 FILE PHOTO: A wind turbine is seen over the panels of a solar power plant of Korea South East Power Co. (KOSEP) in Incheon, in this file photo taken September 30, 2010. REUTERS/Jo Yong-Hak/File Photo

HONG KONG (Reuters) - Asia-Pacific borrowers more than doubled issuance of bonds tied to environmental, social and governance (ESG) themes to a record $69 billion this year, data showed, as they sought to burnish their sustainability credentials and tap red-hot investor demand.

Bankers say the trend will continue, boosting their fee incomes. Some of the biggest global investment banks are bulking up their teams to cope with the increased ESG-related bond deals.

ESG-related issuances from companies, government bodies and other institutions in Asia-Pacific (excluding Japan) this year have outpaced those by U.S. issuers for the first time in two years.

Asia-Pacific entities are fast-tracking their ESG plans, taking advantage of abundant liquidity and soaring demand from global investors who are keen to increase their exposure to the region as economies recover from the impact of the COVID-19 pandemic with the growing rollout of vaccinations.

Data from Refinitiv showed that of the $69.1 billion in ESG bonds issued in Asia-Pacific so far this year, green bonds were the most common, accounting for 70% of the deals and ahead of sustainability-linked bonds, which made up 20%.

Chinese entities issued 51.3% of the ESG bonds in the region, ahead of South Korea which accounted for 21.2%.

"Demand for green deposits, loans and access to capital markets is running at record levels versus prior years and is gathering further momentum," said Kaleem Rizvi, Citigroup's head of corporate banking in Asia Pacific.

"More clients are realising they need a clear ESG strategy. Investors and other stakeholders are demanding it and they don't want to be left behind."

So far in 2021, Citi has been involved in ESG-related financing deals in Asia Pacific worth nearly $25 billion, six times more than the year-ago period – including a Hong Kong government $2.5 billion green bond.

China Development Bank raised $3 billion in a green bond in March and the Asian Infrastructure Investment Bank carried out a $2.9 billion deal in January, the data showed.

Climate change and other green issues are high on the agenda of most Asian governments, and financial regulators, such as in Hong Kong and Singapore, have also begun changing rules to force companies to better disclose their environmental impact.

Hong Kong announced in December that financial institutions and listed companies will have to disclose the financial impact of climate change on their businesses, as outlined in a major global standard, by 2025.

There have been 234 ESG-linked bond issuances in Asia- Pacific this year, nearly trebling from the same time-frame last year, Refinitiv data showed.

In the United States, there have only been 86 deals, which raised $53.1 billion. In Europe, the traditional ESG market leader, $248.1 billion in ESG-related bonds have been issued in 2021, at least three times more than the same time last year.

A risk for investors in ESG-related bonds in China and other Asia-Pacific markets is 'greenwashing', or issuers exaggerating their environmental credentials which has led to caution among some bond buyers.

"Investors have an expansive appetite at the moment but there is also an increasingly discerning approach to investing; they don't want to get burnt with a greenwashing label," said Kamran Khan, Deutsche Bank's head of ESG for Asia Pacific.

"They have a lot of capital, they want to invest it in ESG transactions, but they want them to be of very high quality with substantiated impact."