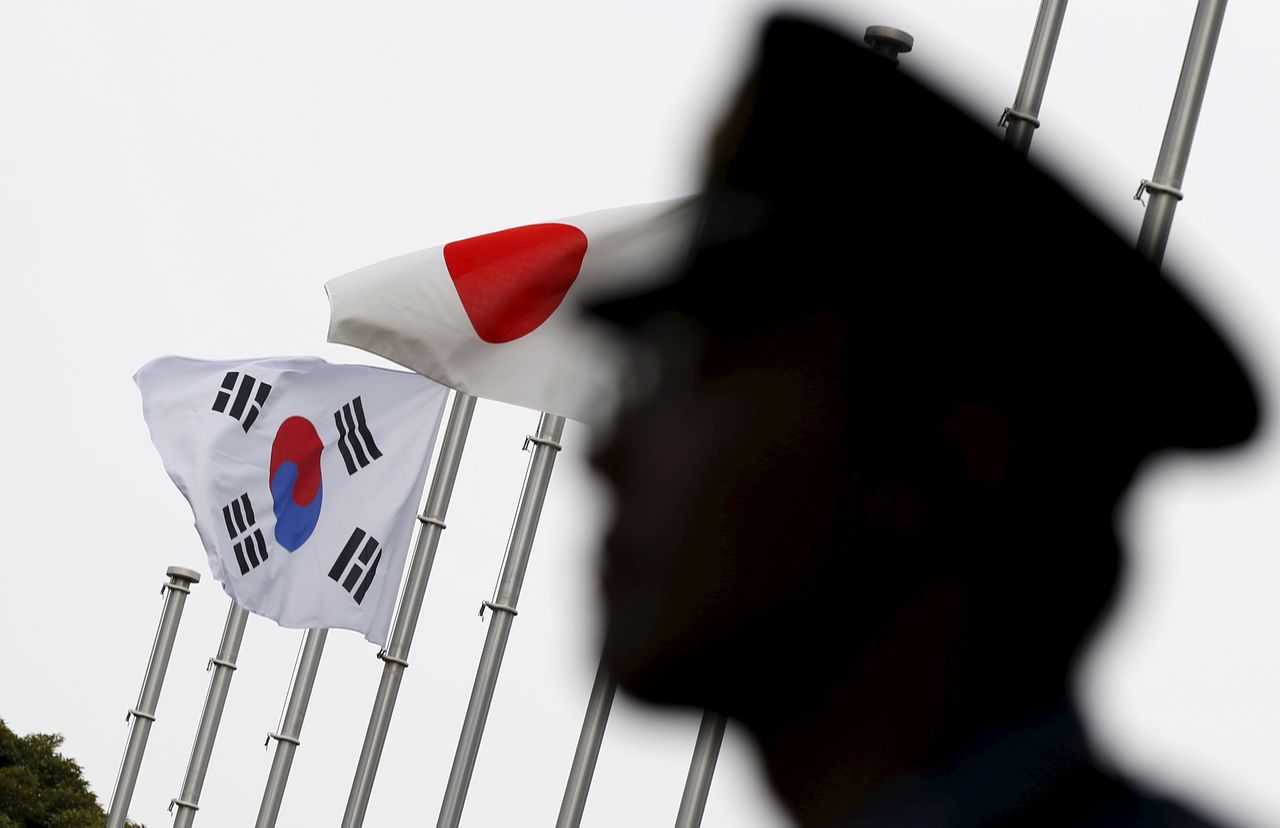 FILE PHOTO: A police officer stands guard near Japan and South Korea national flags at hotel, where South Korean embassy in Japan is holding the reception to mark the 50th anniversary of normalisation of ties between Seoul and Tokyo, in Tokyo June 22, 2015. REUTERS/Toru Hanai

The decision by the Seoul Central District Court will frustrate victims and their supporters in South Korea but it will avert anger from Japan, which considers the issue of compensation for its actions during its 1910-45 rule of Korea closed.

The historic feud, including over "comfort women", Japan's euphemism for mostly Korean women forced to work in its wartime brothels, has long soured bilateral ties between the two important U.S. allies.

A 2018 South Korea Supreme Court ruling that the 1965 treaty, which normalised ties between the neighbours, did not terminate the former forced labourers' right to seek reparation individually plunged relations between them into their worst crisis in decades.

But the Seoul court dismissed the suit, saying the 1965 pact covered victims' right to damages and South Korea was bound by it.

"Proceeding with the case could result in breaching international law ... and trigger adverse effects globally if its final ruling is forcibly implemented," justice Kim Yang-ho told the court.

Kang Gil, a lawyer for the victims, said the ruling was "unjust" as it contradicted the 2018 Supreme Court decision. Kang said they would appeal.

"If their right exists, it means our case is eligible for a trial," Kang told reporters after the verdict. "But the judges appear to have ruled differently because it's a sensitive issue between the two countries."

A South Korean foreign ministry official said the government respected both court rulings and victims' rights and would pursue efforts "with an open mind" to come up with a reasonable solution acceptable to all sides involved.

Japan rejected the 2018 Supreme Court decision, which ordered Nippon Steel to compensate four Korean plaintiffs, saying the issue of wartime compensation was resolved by the 1965 deal.

The dispute led to tit-for-tat export curbs and threatened security cooperation between the neighbours who have both been threatened for years by North Korea.