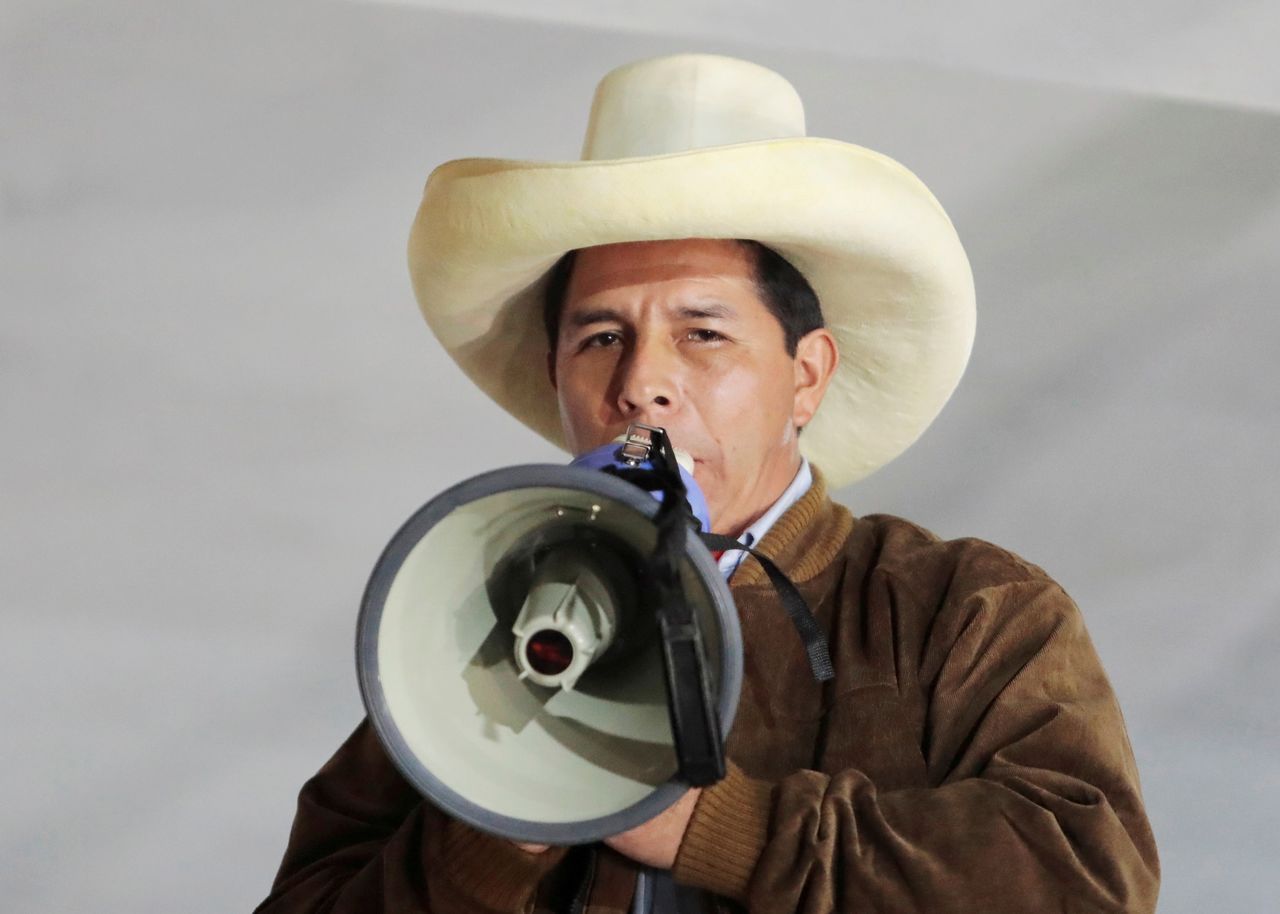 LIMA/SANTIAGO/NEW YORK (Reuters) - Peru's market and mining watchers are wary of a presidential election victory for socialist Pedro Castillo, who was building a narrow lead on Monday, but see a potential silver lining: a sharply split vote could hinder his plans for dramatic reforms.

The leftist candidate has rattled miners and investors since a surprise win in the first-round vote in April, pledging to tear up Peru's decades-old constitution and take up to 70% of profits from firms mining in the country's copper-rich Andes.

On Monday the former teacher and union leader held a razor-thin, though growing, lead https://www.reuters.com/world/americas/peru-awakes-uncertain-future-with-polarized-vote-knife-edge-2021-06-07 over his market-friendly conservative rival Keiko Fujimori in the run-off vote. The country's sol currency and equities sank https://www.reuters.com/world/americas/peru-could-face-capital-flight-if-castillo-clinches-presidency-jpmorgan-2021-06-07.

A final tally may take days to arrive and there could be challenges to the results.

"The only positive factor - even if Castillo wins - is that the result of the election shows you that the country is very divided," said Guillaume Tresca, senior emerging market strategist at Generali Asset Management.

"And with a divided congress it will be very hard for him to implement structural and disruptive reforms."

Whoever wins the presidential vote, Peru will have a deeply fragmented legislature with ten diverse political parties, none of whom hold a majority. Castillo's Free Peru socialists will have the largest bloc, followed by Fujimori's conservatives.

Peru's congress has relished clashing with the presidency in the past. Last year, it pushed through a controversial impeachment process against then-President Martin Vizcarra that forced him to step down and sparked deadly protests.

Mining firm executives in the country stayed mostly quiet on Monday as they waited for the final outcome.

"I think that neither of the two candidates can impose their position and therefore I think that the idea of them making dramatic, drastic changes is very debatable," he said.

Francisco Acuña, a Santiago-based analyst at mining consultancy CRU, said it was quite likely the new government would need to negotiate and reach consensus with companies.

"It is evident that the country is torn. Whoever wins, the margin will be minimal," he said.

Gustavo Medeiros, deputy head of research at emerging market-focused fund manager Ashmore Group, said that a Fujimori presidency would bring less risks of "populism" than Castillo, though there was much still unknown about the leftist.

"Whoever wins is going to have to govern with a very fragmented congress and that is going to complicate any radical structural legislative changes," he said, adding that market weakness from a Castillo win could create a buying opportunity.

Castillo said in a statement on Monday evening that if confirmed as president he would respect the central bank's authority and that he was not planning nationalizations or expropriations, but added a tax overhaul on mining was needed to help pay for planned healthcare and education reforms.

Julio Ruiz, chief economist for Mexico and Peru at Brazilian bank Itau, said a win for Fujimori - who has pledged to keep in place market-friendly policies that underpinned Peru's economic growth in recent decades - would be more positive for markets.

A win for Castillo, said Ruiz, could lead to pressure on the exchange rate and raise the probability that the central bank would hike rates before the end of the year to avoid inflationary pressures.

Alejo Czerwonko, Chief Investment Officer for Emerging Markets Americas at UBS Global Wealth Management, said a Castillo win would lead to a sell-off in Peruvian assets, though he faced challenges turning his rhetoric into reality.

"Whether he manages to deliver will depend on how well he navigates the institutional constraints he will face given his party only enjoys 42 out of the 130 seats in congress," he said.

"Key to watch is whether he is successful in his attempt to push for a constitutional reform."