LONDON (Reuters) - An agreement by wealthy nations aimed at squeezing more tax out of large multinational companies could hit some firms hard while leaving others - including some of the most frequent targets of lawmakers’ ire - relatively unscathed, according to a Reuters analysis.

Finance ministers from the Group of Seven leading nations on Saturday agreed on proposals aimed at ensuring that companies pay tax in each country in which they operate rather than shifting profits to low-tax havens elsewhere.

One proposed measure would allow countries where customers are based to tax a greater share of a multinational company’s profits above a certain threshold. The ministers also agreed to a second proposal, which would levy a minimum tax rate of 15% of profits in each overseas country where companies operate, regardless of profit margin.

The Reuters review of corporate filings by Google-owner Alphabet Inc suggests the company could see its taxes increase by less than $600 million, or about 7% more than its $7.8 billion global tax bill in 2020, if both proposed measures were applied. Google is among the companies that some lawmakers have criticized as paying too little tax.

Meanwhile, medical group Johnson & Johnson, which is also U.S.-based, could see its tax bill jump by $1 billion, a more than 50% rise over its $1.78 billion global tax expense last year, according to Reuters’ calculations.

Both Google and J&J declined to comment on the calculations.

In a statement Saturday following the G7’s agreement, Google spokesman José Castañeda said: "We strongly support the work being done to update international tax rules. We hope countries continue to work together to ensure a balanced and durable agreement will be finalized soon."

Determining the exact impact the new rules will have on companies is difficult, in part because companies don’t typically disclose their revenues and tax payments by country. And key details about how the rules would be implemented are still pending, tax specialists say, including to which countries profits would be reallocated and to what degree taxes generated by the new measures would offset taxes owed under the current system.

The proposed rules themselves also face hurdles. In the United States, several top Republican politicians have voiced opposition to the deal. Details of the agreement are also due to be discussed by the wider Group of 20 countries next month.

Four tax specialists concurred with Reuters’ methodology but noted that there is still uncertainty about how the measures would be applied, including which tax breaks are included in the 15% minimum overseas tax.

“The deal makes sure that the system is fair, so that the right companies pay the right tax in the right places,” said a spokesperson for the UK Treasury, which hosted the G7 meeting. “The final design details and parameters of the rules still need to be worked through.”

The first proposed measure focuses on large global firms that report at least a 10% profit margin globally. Countries in which the companies operate would have the right to tax 20% of global profits above that threshold in an effort to stop companies reporting profits in tax havens where they do little business.

Applying that formula to Google could result in as much as $540 million in additional taxes, according to the Reuters analysis.

Based on Google’s 2020 global profits of $48 billion, Reuters calculated what portion of that income could be reallocated based on the G7’s proposed formula. Reuters then calculated how much more the company would pay if tax was levied on that portion of income at the rate of 23% - which is the average tax rate for developed nations as identified by Paris-based research body the Organization for Economic Cooperation and Development - rather than the average overseas tax rate of 14% that Google said it paid last year.

Applying the same methodology to J&J, and its 2020 global profits of $16.5 billion, the healthcare company would see its global tax bill rise by about $270 million as a result of the first measure.

The exact impact on each company’s tax bill would depend on how much income is actually reallocated. Also at issue is which country the profit is moved from and to - and therefore what the increase in tax rate is. If all the reallocated profit comes out of zero-tax jurisdictions, the impact could be greater.

U.S. and UK officials say the other measure, involving a 15% global minimum tax, will have a bigger total impact on how much in taxes governments collect. But its effect on companies will vary widely. In recent years, Google-parent Alphabet, like some other targets of tax campaigners, has reorganized its international tax structures and last year reported over three-quarters of its global income in the United States compared to less than half in each of the previous three years, according to its corporate filings.

Google reported $10.5 billion of dollars of earnings from outside the United States last year and an average overseas tax rate of 14%, which is one percentage point below the G7’s proposed minimum tax.

If Google’s overseas earnings were all taxed at 15%, the additional tax due would be $100 million. The impact could be higher if a large proportion of the money is earned in zero-tax jurisdictions like Bermuda, where Google used to report over $10 billion a year in income. Conversely, the impact of the minimum tax would be reduced if the first measure prompted Google to reallocate some of its non-U.S. earnings out of tax havens.

Excluding the impact of the first proposed measure, increasing the tax rate on overseas income to 15% would mean $45 million of additional tax.

The situation for J&J would be very different. It earned 76% of its 2020 income outside of the United States and paid 7% tax on average on that overseas profit. Applying a 15% tax rate to that overseas income figure would result in $990 million in additional taxes, according to Reuters’ calculations.

While the reallocation of profit under the first measure would reduce this impact, the combined result of the two measures would be more than $1 billion.

Academics say businesses are adept at mitigating the impact of measures that are designed to reduce tax avoidance and therefore could re-organize in order to limit the impact of the proposed measures. And, in reality, tax incentives offered by governments mean companies may end up paying less in practice. 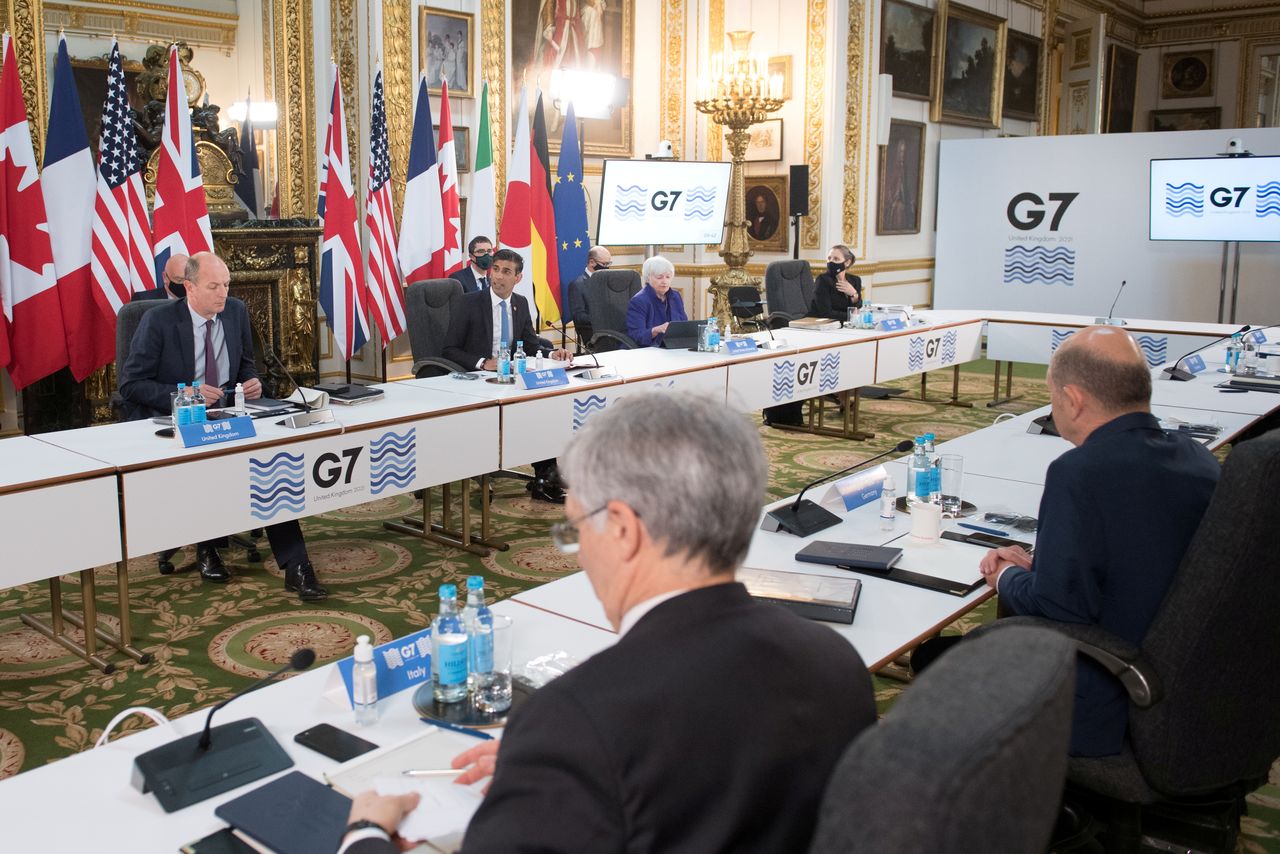 FILE PHOTO: Britain's Chancellor of the Exchequer Rishi Sunak speaks at a meeting of finance ministers from across the G7 nations ahead of the G7 leaders' summit, at Lancaster House in London, Britain June 4, 2021. Stefan Rousseau/PA Wire/Pool via REUTERS/File Photo 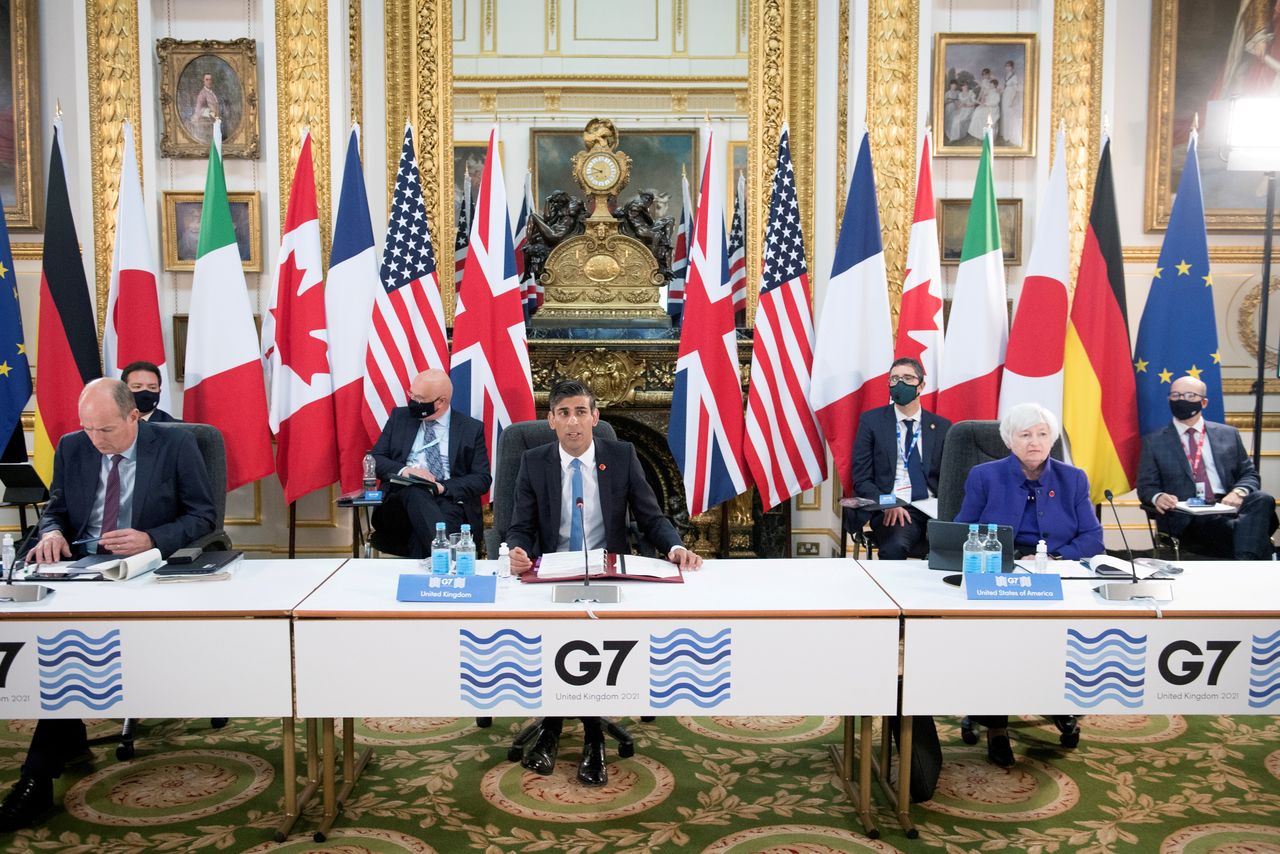 FILE PHOTO: Britain's Chancellor of the Exchequer Rishi Sunak speaks at a meeting of finance ministers from across the G7 nations ahead of the G7 leaders' summit, at Lancaster House in London, Britain June 4, 2021. Stefan Rousseau/PA Wire/Pool via REUTERS//File Photo/File Photo