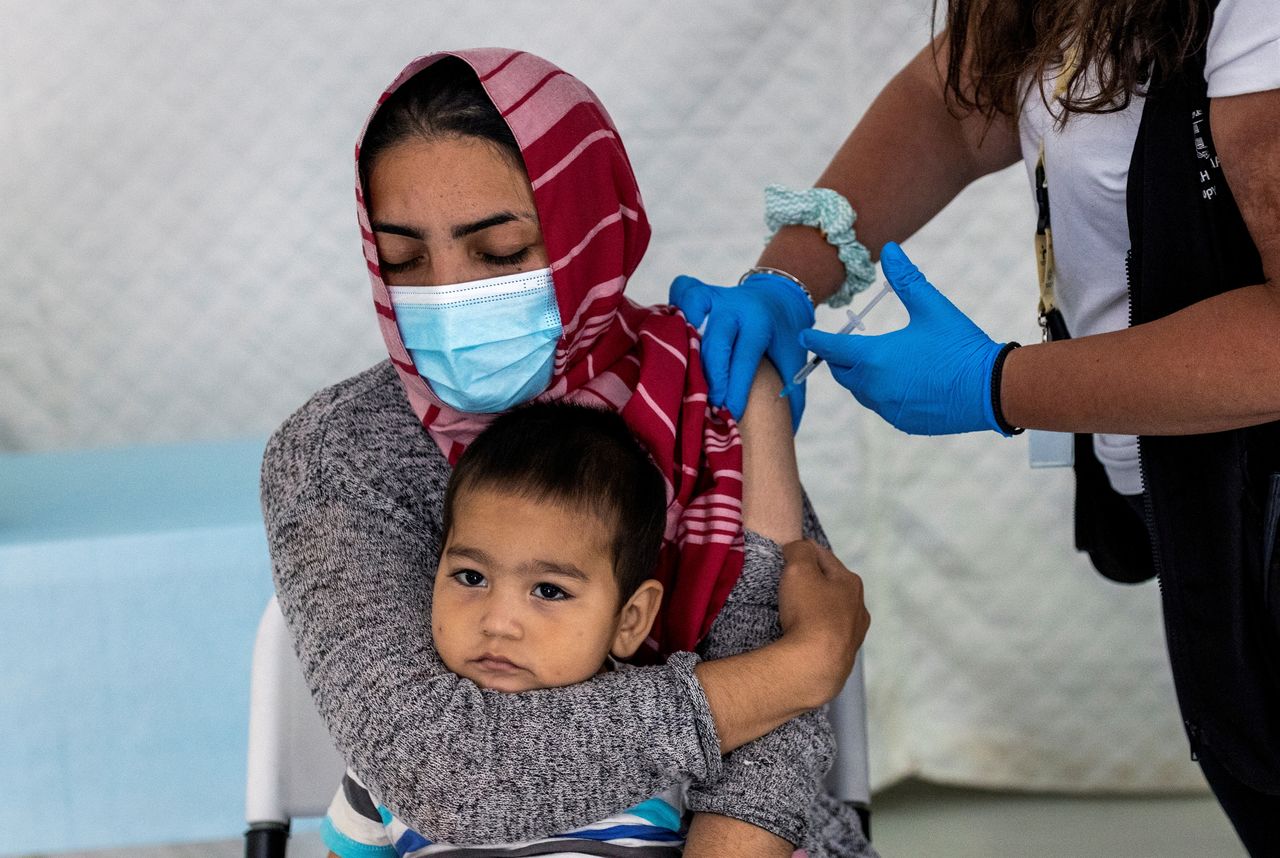 FILE PHOTO: A migrant holds her baby as she receives a shot of the Johnson & Johnson vaccine against the coronavirus disease (COVID-19) in the Mavrovouni camp for refugees and migrants on the island of Lesbos, Greece, June 3, 2021. REUTERS/Alkis Konstantinidis

By Kate Holton and Elizabeth Piper

CARBIS BAY, England (Reuters) - A Group of Seven plan to donate 1 billion COVID-19 vaccine doses to poorer countries lacks ambition, is far too slow and shows Western leaders are not yet on top of tackling the worst public health crisis in a century, campaigners said on Friday.

While the head of the United Nations welcomed the move, even he said more was needed. Antonio Guterres warned that if people in developing countries were not inoculated quickly, the virus could mutate further and become resistant to the new vaccines.

"We need more than that," he said of the G7 plan. "We need a global vaccination plan. We need to act with a logic, with a sense of urgency, and with the priorities of a war economy, and we are still far from getting that."

U.S. President Joe Biden and British Prime Minister Boris Johnson had used the G7 summit in England to announce the donation of 500 million and 100 million vaccines respectively for the world's poorest nations.

Canada is expected to commit to sharing up to 100 million doses and other pledges may follow after Johnson urged G7 leaders to help inoculate the world's nearly 8 billion people against the coronavirus by the end of next year.

But health and anti-poverty campaigners said that, while donations were a step in the right direction, Western leaders had failed to grasp that exceptional efforts were needed to beat the virus. Help with distribution was also necessary, they said.

Former British prime minister Gordon Brown, who has been pushing for richer countries to share more of the cost of vaccinating developing countries, said the G7 pledges were more akin to "passing round the begging bowl" than a real solution.

"It's a catastrophic failure if we can't go away in the next week or two ... with a plan that actually rids the world of COVID now we've got a vaccine," he told Reuters.

Alex Harris at Wellcome, a London-based science and health charitable foundation, challenged the G7 to show the political leadership the crisis demanded.

"What the world needs is vaccines now, not later this year," he said. "We urge G7 leaders to raise their ambition."

COVID-19 has ripped through the global economy, with infections reported in more than 210 countries and territories since the first cases were identified in China in December 2019.

The race to end a pandemic that has killed around 3.9 million people and sown social and economic destruction will feature prominently at the three-day summit which began on Friday in the English seaside resort of Carbis Bay.

British foreign minister Dominic Raab warned that other countries were using vaccines as diplomatic tools to secure influence. Britain and the United States said their donations would come with no strings attached.

Vaccination efforts so far are heavily correlated with wealth: the United States, Europe, Israel and Bahrain are far ahead of other countries. A total of 2.2 billion people have been vaccinated according to Johns Hopkins University data.

"If the best G7 leaders can manage is to donate 1 billion vaccine doses then this summit will have been a failure," Oxfam's health policy manager Anna Marriott said.

Oxfam also called on G7 leaders to support a waiver on the intellectual property behind the vaccines.

French President Emmanuel Macron has said intellectual property rights should not hinder access to vaccines during a pandemic, appearing to back Biden on the subject.

But the pharmaceutical industry has opposed it, saying it would stifle innovation and do little to increase supplies. Britain, which backed Oxford-AstraZeneca's not-for-profit shot, has said a patent waiver is not necessary.

Of the 100 million British shots, 80 million will go to the COVAX programme led by the World Health Organization (WHO) and the rest will be shared bilaterally with countries in need.

Johnson echoed Biden in calling on his fellow leaders to make similar pledges and for pharmaceutical companies to adopt the not-for-profit model during the pandemic. The U.S. donation of Pfizer shots will be supplied at cost.

The British doses will be drawn from the stock it has already procured for its domestic programme, and will come from suppliers Oxford-AstraZeneca, Pfizer-BioNTech, Johnson & Johnson's Janssen, Moderna and others.