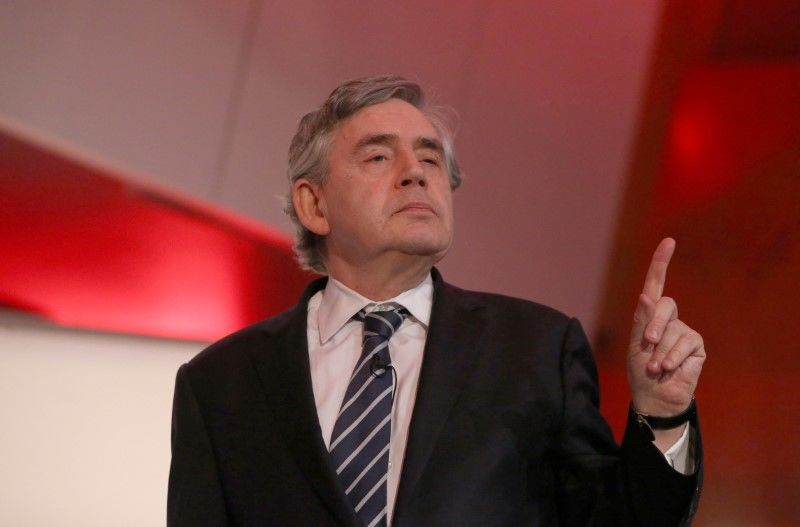 After U.S. President Joe Biden vowed to donate 500 million shots and British Prime Minister Boris Johnson at least 100 million as part of a G7 aim to offer 1 billion doses, Brown told Reuters the rich nations needed to build "a comprehensive plan to vaccinate the world" rather than make piecemeal offers.

Mass vaccination against the novel coronavirus is seen as crucial to restoring economic growth, trade and travel, but Western nations are racing ahead of developing countries, many of which have the lowest inoculation rates and rising cases.

Brown, who was prime minister from 2007 to 2010, has been leading a push for richer countries to share more of the cost of vaccinating developing countries and to provide them with the doses needed to curb infections.

And he said leaders of the seven largest advanced economies -- the United States, Britain, Canada, France, Germany, Italy and Japan -- had more to do at this weekend's summit to reach the 11 billion doses needed.

"I am afraid they have failed the first test even before they've had a weekend of talks because it looks more like passing the begging bowl round than a comprehensive plan to vaccinate the world," Brown told Reuters in an interview.

"And if the richest countries can't get together to mount a successful plan to vaccinate the world, I don't know who will."

Health and anti-poverty campaigners said the vaccine donations lacked ambition, were too slow and showed Western leaders are not yet up to the job of tackling the worst public health crisis in a century.

Brown, who has spoken to Johnson about some issues raised at the G7 but not recently, envisages in his book "Seven Ways to Change the World" a system where the richest nations would share the near-$50 billion cost of a two-year global vaccine effort.

The United States and Europe would pay about a quarter each, Britain 5%, Japan 6%, Canada 2%, with South Korea and Australia also putting in 2% each to fund two-thirds of the pot. Russia, China and others would be asked to fund the rest.

Britain, which is hosting the G7 in a seaside village in England, has said the nations should aim to vaccinate the world by the end of next year, and that London will start sending vaccines to poorer countries in the coming weeks.

"The government has yet to recognise (that) if you're leading the G7, and you're talking about 'global Britain', and you made a promise last Sunday that you're going to vaccinate the world, you've got to deliver on it," he said.

"It's a catastrophic failure if we can't go away in the next week or two ... with a plan that actually rids the world of COVID now we've got a vaccine."