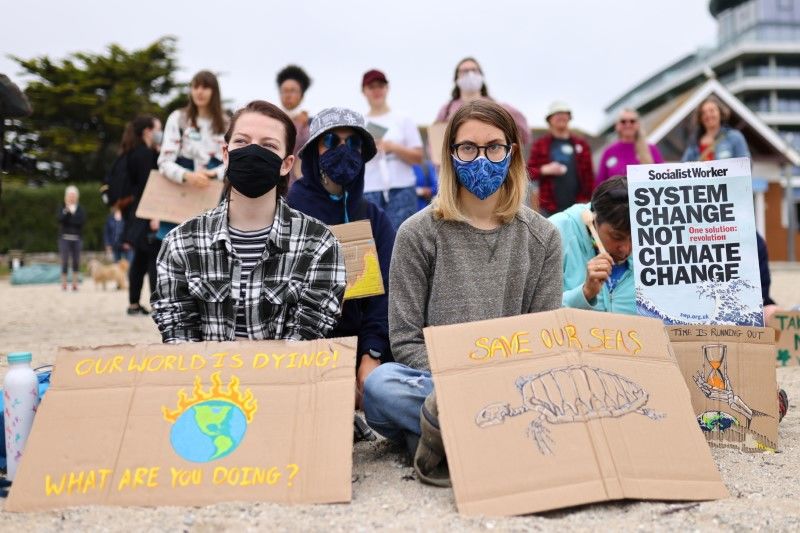 Two people sit with signs during a protest of Cornwall Climate Youth Alliance in partnership with Fridays for Future and Climate Live, at Gyllyngvase Beach, in Falmouth, on the sidelines of G7 summit in Cornwall, Britain, June 11, 2021. REUTERS/Tom Nicholson

FALMOUTH, England (Reuters) - The Group of Seven leaders will jeopardise the chance of success at a landmark global climate change summit later this year if they fail to honour past aid promises this weekend, development campaigners said.

Presidents and prime ministers from the United States, Japan, Germany, France, Italy, Canada and hosts Britain kicked off a three-day summit in southwestern England on Friday with progress on how to slow global warming at the top of the agenda.

But advocacy groups said G7 and other rich nations had to deliver on a promise of $100 billion a year in financing to help poor countries overhaul their economies and adapt to the impacts of climate change, or risk failure at November's climate summit.

Stephanie Draper, chief executive of Bond, which groups development organisations, said the United Nations' Climate Change Conference (COP26) summit in Glasgow would hinge on how Britain, as chair of the talks, would be able to persuade other countries to take bold action.

"That diplomatic relationship is underpinned by trust that actually there is going to be a balance of the G7 doing what they say they are going to do," Draper told reporters in Falmouth, 25 miles from the G7 leaders' gathering.

Catherine Pettengell, director of Climate Action Network, said there was no indication that the annual $100 billion pledge was about to be honoured.

Finance ministers from the G7 said in a joint statement earlier this month that they were reaffirming the $100 billion goal and "we look forward to further commitments at the G7 Leaders' Summit or ahead of COP26."