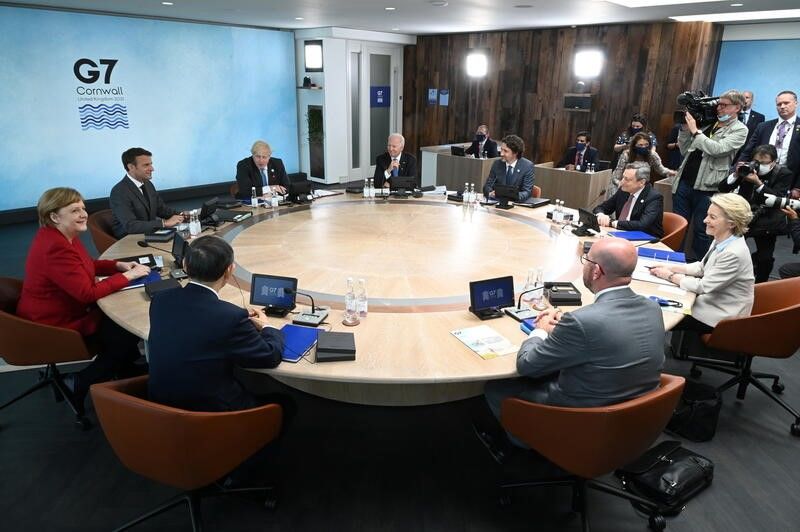 CARBIS BAY, England (Reuters) -Leaders of the Group of Seven rich nations were in broad agreement about the need to continue supporting their economies with fiscal stimulus after the ravages of the COVID-19 pandemic, a source familiar with the discussions said on Friday.

The backing for more stimulus was shared by all leaders including Angela Merkel of Germany which has traditionally opposed heavy borrowing to spur growth, a position it has relaxed in the face of the COVID-19 crisis.

The administration of U.S. President Joe Biden has been pushing its allies to keep on spending with Treasury Secretary Janet Yellen urging her G7 colleagues in February to "go big".

"There was broad consensus across the table on continued support for fiscal expansion at this stage," the source said, adding that Biden, British Prime Minister Boris Johnson and Italy's Mario Draghi expressed particular support.

The International Monetary Fund has repeatedly urged Group of Seven countries and others to continue fiscal support measures.

The source said the G7 leaders believed there should be long-term policies for ensuring the health of public finances in the future, echoing the position of their finance ministers who met earlier this month in London.

Draghi, president of the European Central Bank from 2011 to 2019, said the rich major Western economies needed some sort of "long-term fiscal anchor" to reassure investors and avoid a rise in market interest rates that could hurt the recovery, the source said.

The leaders believed a post-lockdown rise in inflation in many countries would prove temporary, the source said.

"There was a bit of discussion on inflation but the feeling was that it was temporary," the source said.

G7 leaders stressed the importance of taking action to reduce unemployment such as retraining and offering support for younger workers, a proposal supported by Canada's Justin Trudeau, the source said.

At the opening of the meeting, Johnson said the leaders needed to be careful not to "repeat the mistakes of the last great crisis, the last big economic recession of 2008 when the recovery was not uniform across all part of society."