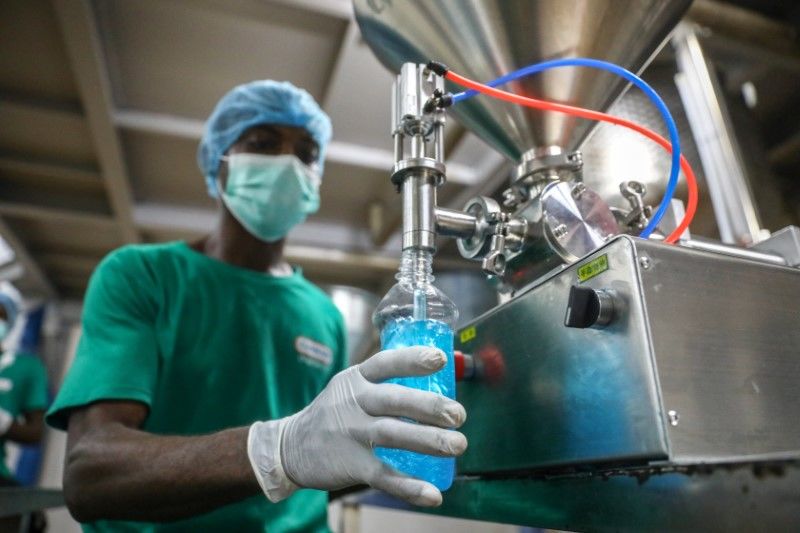 FILE PHOTO: An employee fills a bottle with hand sanitizer in Cormart factory as the company steps up production of hand sanitizers to prevent the spread of coronavirus disease (COVID-19), on the outskirts of Lagos, Nigeria March 19, 2020. Picture taken March 19, 2020. REUTERS/Temilade Adelaja

LONDON (Reuters) - Top development banks from the world's richest countries made a landmark joint pledge on Monday to pump $80 billion into African companies and projects over the next five years.

The International Monetary Fund has estimated sub-Saharan Africa will need an additional $425 billion between now and 2025 to fight COVID-19 and reduce poverty levels now being exacerbated by the pandemic.

The region is also being hit hard by climate change and Monday's $80 billion pledge was the first time the Development Finance Institutions (DFI) from the United States, Europe and other Group of Seven wealthy nations have made a collective commitment to the African continent.David Marchick, chief operating officer of the U.S. International Development Finance Corporation (DFC) said investing more in Africa was now "a top priority" under the Biden administration, while the head of the European Investment Bank, Werner Hoyer, which injected over 5 billion euros ($6 billion) into Africa last year, said it was ready to co-operate further with African and multilateral partners.

The step comes as Western nations fight to counter rapidly expanding Chinese and Russian economic and political influence in Africa with its fast-growing populations and vast mineral resources.

Monday's pledge followed the G7's weekend promise to provide 1 billion COVID-19 vaccine doses to poorer countries over the next year and news that they were also looking at reallocating another $100 billion from the IMF's war chest to help with the economic fallout.

The World Health Organization (WHO) and global vaccine charities launched the COVAX programme last April to distribute COVID-19 vaccines to some of the world's poorest people.

The scheme has faced setbacks though: production glitches, a lack of support from wealthy nations and a recent move by India, the biggest vaccine manufacturer, to curb its exports following its own massive spike in cases.