BEIRUT (Reuters) - Fugitive former car executive Carlos Ghosn said on Monday he was prepared for a lengthy process to clear his name with French authorities, and vowed to challenge an Interpol warrant that is barring him from travel outside of Lebanon.

The architect of the Renault-Nissan auto alliance has been fighting multiple probes since fleeing to Lebanon from Japan in late 2019, and has said he hopes to clear his name in financial misconduct cases against him.

Ghosn was chairman of both Nissan and Mitsubishi and chief executive of Renault when he was arrested in Japan in 2018 on charges of under-reporting his salary and using company funds for personal use. He has denied wrongdoing.

The Lebanese-French executive said he had answered hundreds of questions from French investigators earlier this month in hearings centred around allegations of financial misconduct in France.

Ghosn said he had submitted voluntarily to questioning at Beirut's Palace of Justice as a witness.

"I will be awaiting their (French investigators') conclusion, which may be coming in the next months," Ghosn told Reuters in an interview to discuss a recently published book he co-authored with his wife Carole, 'Ensemble toujours'.

"But the process of defending myself in front of the French (authorities) will no doubt be very long and I will have to be patient."

Ghosn said the only questions he did not answer were those relating to the Japanese prosecution, on advice from his lawyers.

On Monday he said he was seeking to cancel an Interpol red notice - issued for fugitives wanted for prosecution - imposed on him following a request from Tokyo, which was received by Lebanon in Jan. 2020.

The notice means Ghosn risks arrest if he travels outside Lebanon, which has no extradition agreement with Japan.

Lebanese authorities have interrogated him over the notice and have asked for a transfer of his file from Tokyo but had not received anything yet, he said.

The red notice means Ghosn is staying in Beirut for the time being, where he says he is enjoying his slower-paced life after his jet-setting executive years.

"At least I can live my life with my wife. We can have breakfast together in the morning. We are not rushed to an airplane. I don't have jetlag and I sleep much better," he said.

"Fundamentally what happened to me brought me to really see what is essential in life."

Ghosn said he would only go back to Japan to clear his name if the legal system, where the conviction rate is 99%, was changed.

"Clearly you have a completely different system when you are talking about Japanese responsibility and foreign responsibility, and this has to stop," he said.

In November a U.N. panel of experts said Ghosn had been treated unfairly by the system, but the Japanese justice minister criticised the panel, saying its conclusions were based on factual errors.

At the time of Ghosn's escape he was awaiting trial on charges that he understated his compensation in Nissan's financial statements by 9.3 billion yen ($85 million) over a decade, and enriched himself at his employer's expense through payments to car dealerships.

On Monday a U.S. Army Special Forces veteran and his son pleaded guilty in Tokyo to charges they helped him flee, hidden in a box aboard a private jet. The pair, who are being held at the same jail in Tokyo where Ghosn was detained in 2018, could face up to three years in prison.

Ghosn said their guilty plea would translate into a fast-tracked trial in contrast to that of Greg Kelly, the former Nissan executive charged with aiding him to hide his earnings.

Kelly is on trial in Tokyo, where he has denied the charges against him. "If you plead innocent you will have a very long ordeal, so there is something totally wrong," Ghosn said.

Ghosn suffered a setback in one of his legal cases last month, when a Dutch court ordered him to repay 5 million euros ($6.1 million) in wages to Nissan and Mitsubishi in a case he had brought.

He said the verdict would be appealed.

"We are in a fighting mode, and very disappointed by the result." 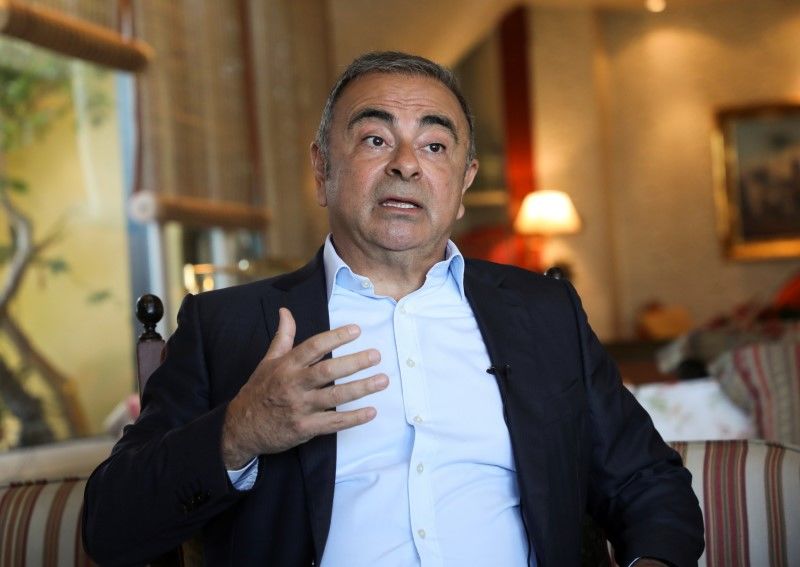 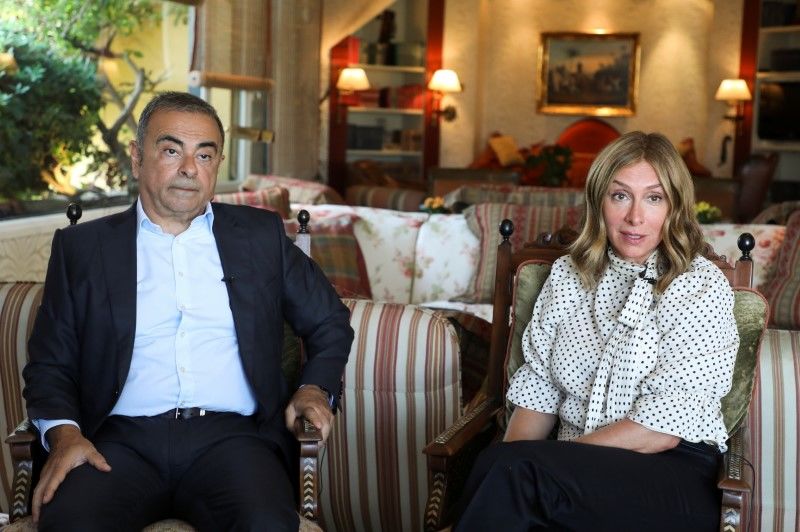 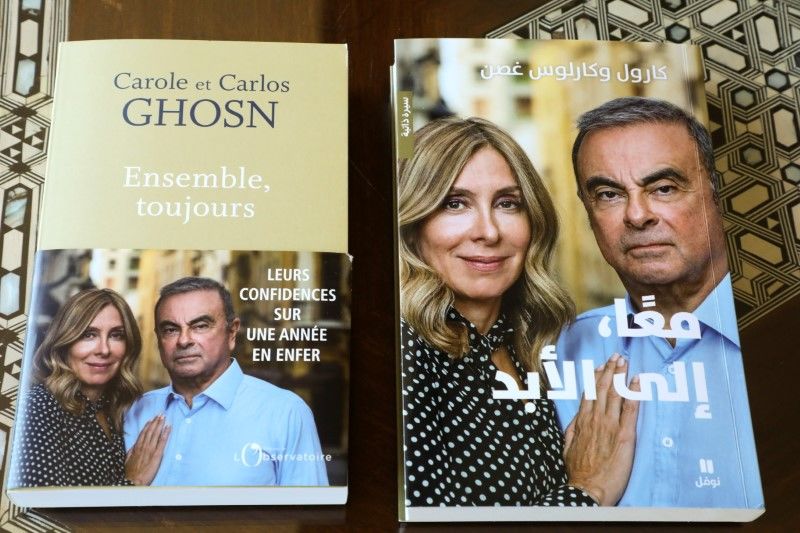 The latest book for Former Nissan Chairman Carlos Ghosn, that he co-authored with his wife Carole 'Ensemble toujours', is seen in Beirut, Lebanon June 14, 2021. REUTERS/Mohamed Azakir 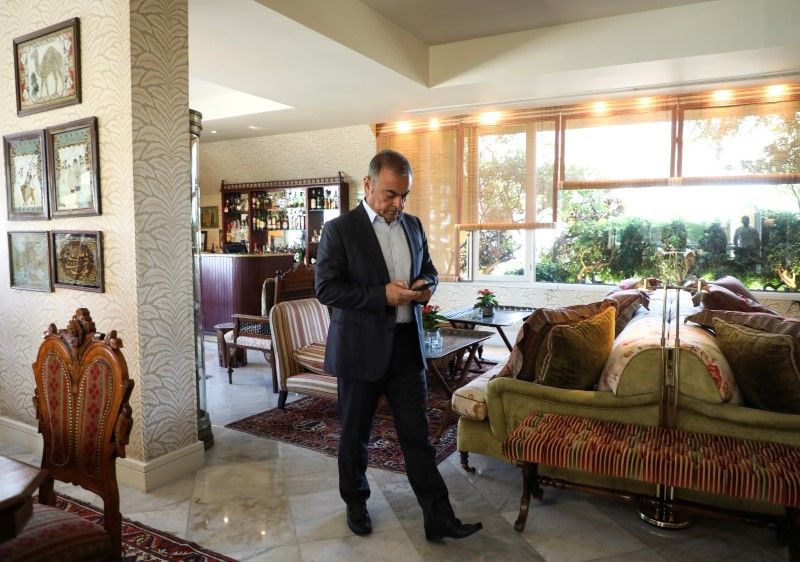 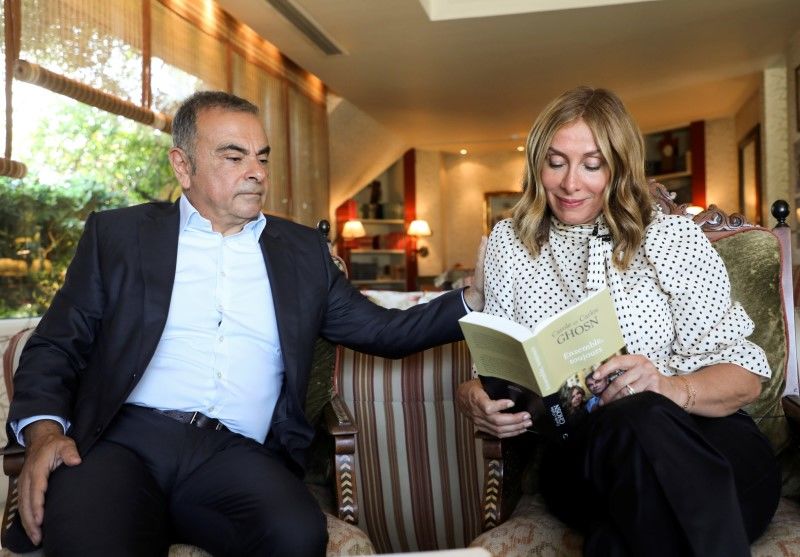