Up to 80% of Tokyo Olympics media expected to be vaccinated, say organisers 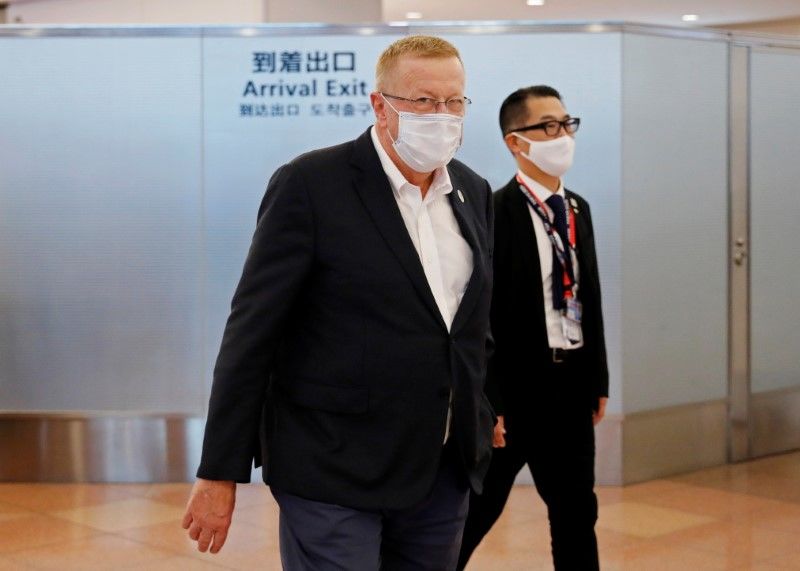 By Linda Sieg and Antoni Slodkowski

TOKYO (Reuters) -The International Olympic Committee (IOC) expects 70% to 80% of the news media covering the Olympics in Tokyo this summer to be vaccinated, organisers said at the launch of the updated coronavirus guidelines for the Games on Tuesday.

They also said that every sports delegation arriving in Japan would have a COVID-19 liaison officer coordinating with the organisers of the measures to stop the spread of the virus at the event due to start on July 23.

Athletes and members of the media, whose movements will be restricted, will be subject to GPS monitoring for the first 14 days of their stay in Japan.

About 11,000 athletes and 78,000 journalists, officials and staff are expected at the Games, and many Japanese fear the influx could contribute to spreading the virus.

"Between 70% and 80% of broadcasters and accredited press that will be vaccinated, according to the latest feedback received by the IOC," said the organisers in a statement at the news conference in Tokyo announcing the guidelines.

An earlier version of the "playbook", released in February and updated in April, banned singing and chanting during events and required athletes to wear masks at all times except when outdoors, sleeping or eating.

Athletes and close contacts will be tested every day, while all participants must have two negative tests before arrival, officials have said.

Visitors will not be allowed to use public transport for their first 14 days and must eat in specific locations with special hygiene measures.

The launch of the latest guidelines coincided with arrival in Japan of John Coates, a vice-president of the IOC who is its point-man for the event. Coates sparked a backlash last month when he said the Games - already postponed from last year due to the coronavirus - would go ahead even if Tokyo were under a state of emergency due to the pandemic.

Japan's government is considering ending the state of emergency in Tokyo and several other prefectures as scheduled on June 20, but keeping some curbs such as on restaurant hours until the Olympics start in July, domestic media have said.

Economics Minister Yasutoshi Nishimura, in charge of Japan's COVID-19 response, said that with hospital occupancy and infection rates still high, it was too soon to talk as if lifting the state of emergency was a done deal.

"Now is a critical time to call on the public, to suppress infections and to take initiatives for a stable supply of hospital beds," he said. A decision on the emergency could come as early as Thursday, media reported.

Japan has not suffered the explosive COVID-19 outbreaks seen elsewhere, but has still recorded more than 772,000 cases and over 14,000 deaths.

A slow vaccination rollout, though recently accelerating, means only 13% of the population has received at least one shot.

A June 1-9 online survey of companies by think-tank Tokyo Shoko Research showed 64% favoured cancelling or postponing the Games. Nearly 60% said doing so would hurt their businesses but just over 40% expected a positive impact.

Olympic Minister Tamayo Marukawa told a news conference that Pfizer Inc would provide doses of its COVID-19 vaccine to an additional 20,000 people involved in the Olympics and Paralympics, Kyodo news agency reported, doubling the amount previously promised by the U.S. pharmaceutical firm.

Some 80% of qualified athletes have already been vaccinated and the IOC is pushing to raise the number.

A survey by NHK public TV showed 37% approved of his government against 45% who disapproved, the highest disapproval rating since he took office last September.

More than two-thirds were not persuaded by his explanation of why the Games should be held or how they would be made safe.

Just under one-third wanted the Games cancelled while 61% wanted either a cap on spectators or no spectators at all. Organisers have already decided against allowing spectators from abroad and will make a call on domestic spectators later this month.

Reflecting the role of money in decisions to forge ahead, NBCUniversal Chief Executive Jeff Shell said on Monday the event could be the most profitable Olympics in NBC's history. NBCUniversal, owned by Comcast Corp, paid $7.65 billion to extend its U.S. broadcast rights for the Olympics through 2032.