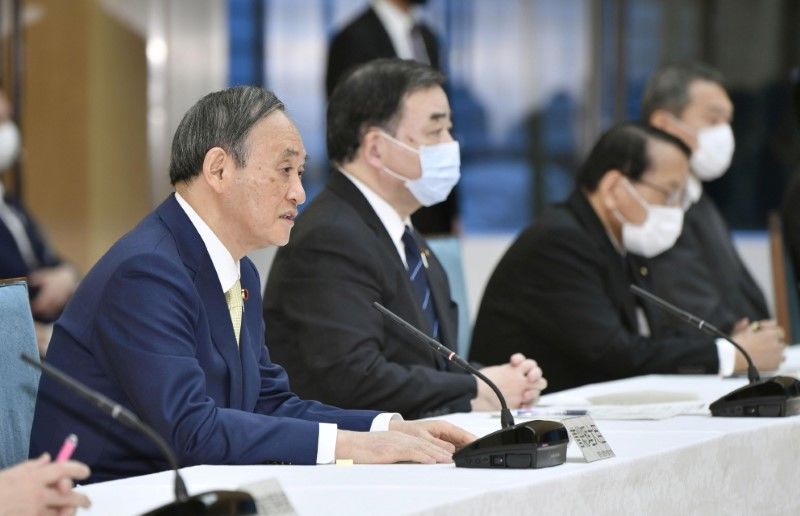 Japan's Prime Minister Yoshihide Suga attends a cabinet meeting at his official residence in Tokyo, Japan April 13, 2021, in this photo taken by Kyodo. Kyodo/via REUTERS ATTENTION EDITORS - THIS IMAGE WAS PROVIDED BY A THIRD PARTY. MANDATORY CREDIT. JAPAN OUT. NO COMMERCIAL OR EDITORIAL SALES IN JAPAN

TOKYO (Reuters) - Japan's lower house of parliament voted down on Tuesday a no-confidence motion brought against the cabinet of Prime Minister Yoshihide Suga by opposition parties angered over its refusal to extend the current parliamentary session.

The parties had sought a three-month extension of the session beyond its scheduled end on Wednesday, to tackle the COVID-19 pandemic as Japan rushes to ramp up vaccinations ahead of the Tokyo Olympics opening on July 23.

"They are refusing our calls to extend parliament in the face of one of the worst crises for decades," Yukio Edano, leader of the main opposition Constitutional Democratic Party of Japan, told the lower house before the vote.

Though Japan has not suffered the ravages of other nations over the coronavirus, its slowness in vaccinating citizens and patchy response have dented support for Suga.

A survey by NHK public television showed 37% of respondents approved of Suga's government while 45% disapproved.

That was the highest disapproval rating since the prime minister took office last September, but the majority held by his Liberal Democratic Party and other coalition partners meant the no-confidence motion had always been unlikely to pass.