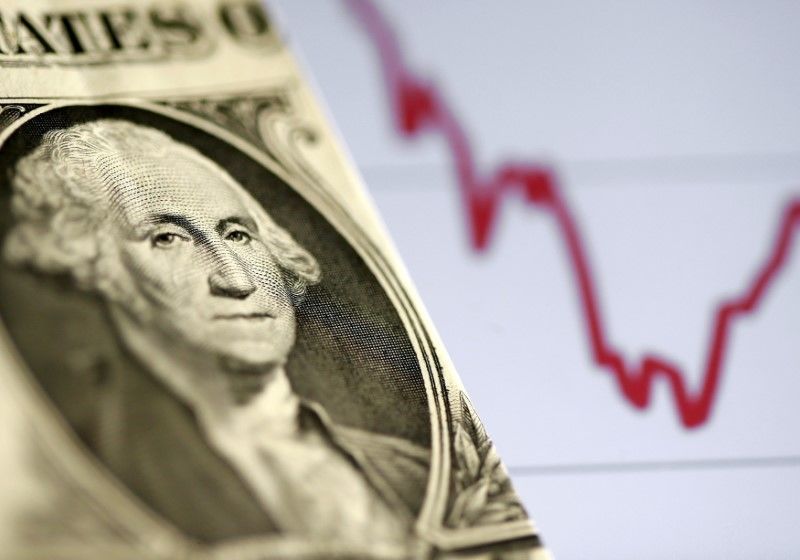 FILE PHOTO: A U.S. dollar note is seen in front of a stock graph in this November 7, 2016 picture illustration. REUTERS/Dado Ruvic/Illustration/File Photo

NEW YORK (Reuters) -The dollar jumped to a near six-week high on Wednesday after the Federal Reserve brought forward its projections for the first post-pandemic interest rate hikes into 2023, citing an improved health situation and dropping a long-standing reference that the crisis was weighing on the economy.

The dollar index, which tracks the greenback against six major currencies, was up 0.63% at 91.103, its highest since May 6.

A majority of 11 Fed officials penciled in at least two quarter-point interest rate increases for 2023, even as officials in their statement pledged to keep policy supportive for now to encourage an ongoing jobs recovery.

The projections showed the outlook for inflation jumping this year, though the price increases were still described as "transitory." Overall economic growth is expected to hit 7%.

"The interesting thing is that the Fed has gone beyond simply acknowledging that inflation is rising and that the U.S. economy has a lot of momentum, and it has essentially shifted to a much more hawkish stance in this set of projections," said Karl Schamotta, chief market strategist at Cambridge Global Payments in Toronto.

The dollar, which slumped through much of 2020, staged a rebound earlier this year, but that relief rally appeared to run out of steam through May as investors remained convinced that the Fed will keep interest rates lower for longer as it seeks to support the economy.

While the Fed's new language does not mean a change in policy is imminent it does provide more support for the greenback, analysts said.

"I think we're back to talking about a mild rally in the U.S. dollar and the data becoming very important over the summer period prior to Jackson Hole and September's meeting," said Simon Harvey, senior FX market analyst at Monex Europe.

Risk-sensitive currencies logged a sharp reversal following the Fed announcement, with the New Zealand dollar down 0.98% at $0.7049 and the Australian dollar - which is seen as a proxy for risk appetite - up 0.95% at $0.7612.

Sterling, which had strengthened against the dollar on Wednesday after data showed British inflation unexpectedly jumped above the Bank of England's 2% target in May, gave up those gains to trade down 0.49%.

Meanwhile, bitcoin's recent rally appeared to run out of steam, as the world's largest cryptocurrency fell 4.34% to $38,430.03.

(Reporting by Saqib Iqbal Ahmed in New York and Elizabeth Howcroft in London; Editing by Alison Williams, Will Dunham and Alex Richardson)