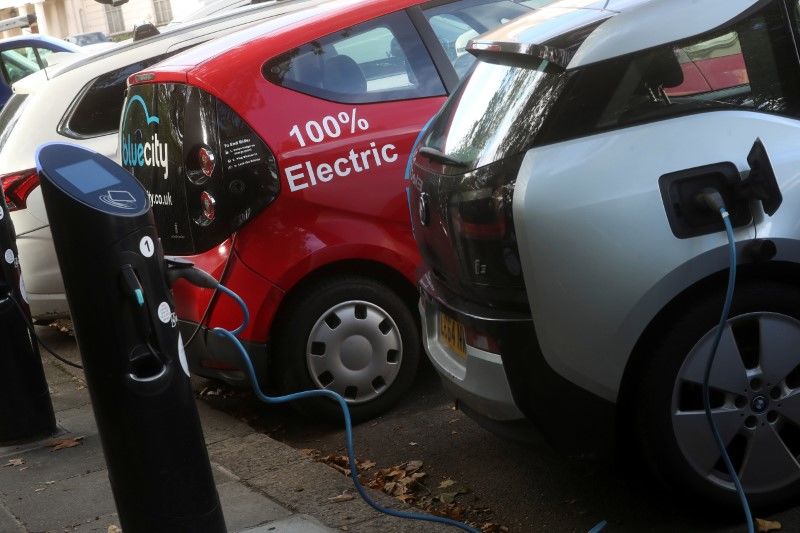 (Reuters) -Britain is in talks with six companies for building gigafactories to produce electric vehicle batteries, the Financial Times reported on Wednesday, citing people briefed on the discussions.

Ford Motor Co, Nissan Motor Co Ltd, LG Corp, Samsung and start-ups Britishvolt and InoBat Auto are in talks with the British government or local authorities about locations for potential factories and financial support, according to the report. (https://on.ft.com/3wu1eYz)

The British government's plan to prohibit the sale of new petrol and diesel cars by 2030 and hybrids by 2035 will require the country's vehicle plants to shift to producing electric models.

A UK business department spokesperson said "to support the auto sector’s transition to electric vehicles" the government is "dedicated to securing gigafactories, and continue to work closely with investors and vehicle manufacturers to progress plans to mass produce batteries in the UK".

So far, there are 38 planned gigafactories across Europe, according to green lobby group Transport & Environment, with only Britishvolt's project being disclosed in the UK, the newspaper said.

In early-stage talks with the British government, Ford has indicated it was exploring making batteries in the UK that would then be shipped to Turkey for use in a planned electric version of its Transit van, the Financial Times reported.

Ford may make parts of battery modules in Britain before shipping them to Turkey for final work and installation, according to the report.

Nissan's talks with the government about building a battery plant at its Sunderland manufacturing complex hinge on energy costs, the Financial Times said.

LG and Samsung are both in early-stage talks with the UK government about investments, and the companies are only likely to proceed if they have deals with major car makers, the report added.

An LG official said the company has been reviewing various countries for expansion, but has made no decisions yet.

Nissan said it will continue to accelerate the process toward electrification, adding "we have no further plans to announce at this time."

The remaining companies did not immediately respond to a Reuters request for comment.

(Reporting by Kanishka Singh in Bengaluru; editing by Shounak Dasgupta and Jason Neely)