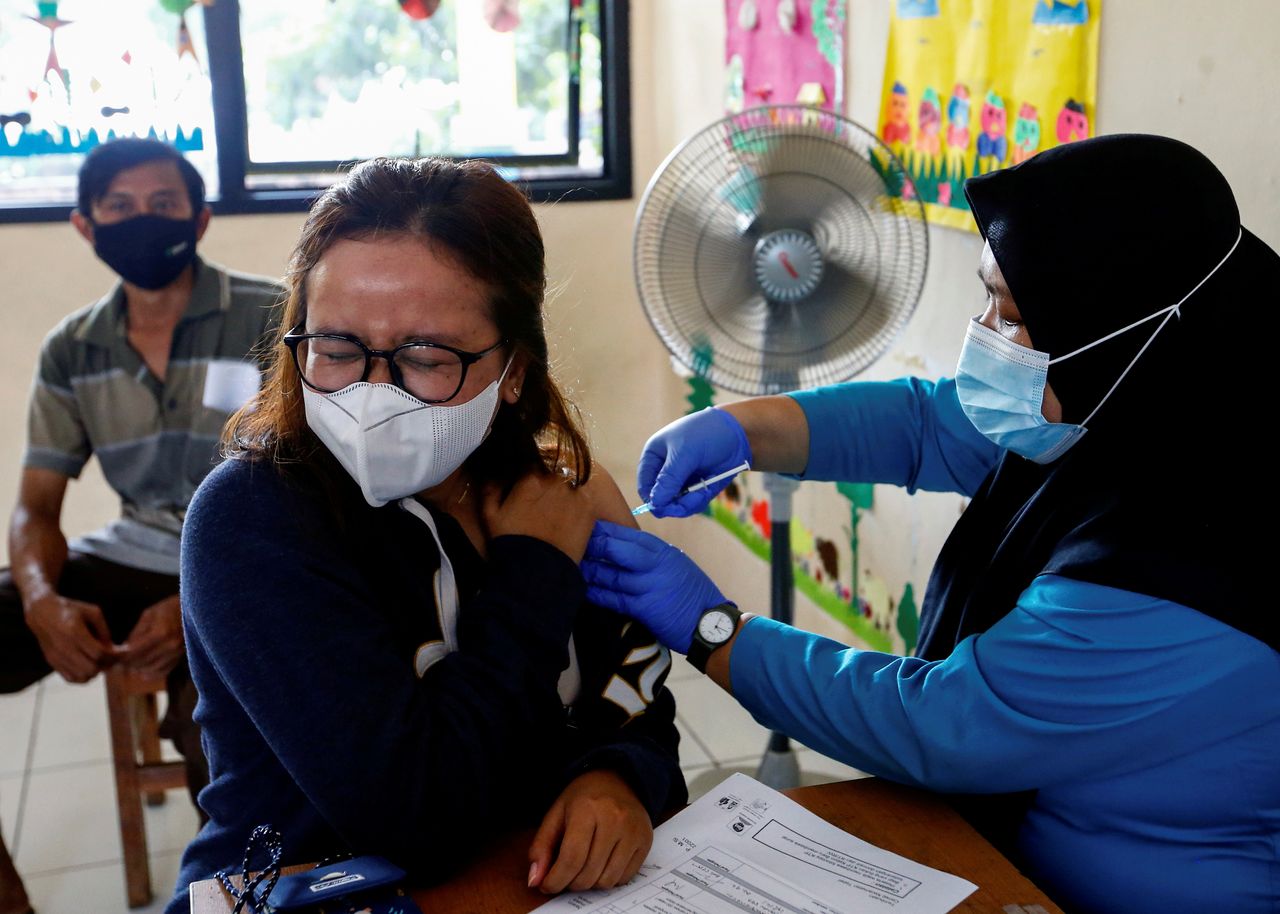 FILE PHOTO: A woman wearing a protective mask reacts as she receives a dose of the AstraZeneca coronavirus disease (COVID-19) vaccine at a kindergarten in Jakarta, Indonesia, June 10, 2021. REUTERS/Ajeng Dinar Ulfiana/File Photo

Regeneron Pharmaceuticals' COVID-19 antibody cocktail reduces deaths in hospitalised patients who have not mounted their own antibody response, a large British study published on Wednesday found.

The therapy, REGEN-COV, has been granted emergency use authorisation for people with mild-to-moderate COVID-19 in the United States, but results from the RECOVERY trial provide the clearest evidence of its effectiveness among hospitalised patients.

It found that the antibody therapy reduced by a fifth the 28-day mortality of people admitted to hospital with COVID-19 whose immune system had not mounted an antibody response.

European Union approval of Russia's Sputnik V coronavirus vaccine will be delayed because a June 10 deadline to submit data was missed, two people familiar with the matter told Reuters, diminishing the shot's prospects in the EU's pandemic response.

One of the sources, a German government official, said the failure to provide the necessary clinical trial data to the EU medicines watchdog would postpone any go-ahead in the bloc until at least September.

European Union governments agreed on Wednesday to add the United States to their list of countries from which they will allow non-essential travel, EU diplomats said.

Sydney records first local case in more than a month

Australia's most populous city Sydney has recorded its first locally acquired case of COVID-19 in more than a month, stoking concerns of a fresh wave of infections on Wednesday.

New South Wales state said it is not clear how the unnamed man in his 60s acquired the virus, but he was a driver who occasionally transported overseas airline crew.

Australia's second largest city Melbourne will allow its five million residents to travel more than 25 km (15 miles) from home and end mandatory wearing of masks outdoors from Friday, despite the city fighting a stubborn outbreak.

India's main opposition party, Congress, on Wednesday questioned the decision by Prime Minister Narendra Modi's government to double the gap between the doses of the AstraZeneca vaccine, asking whether it was prompted by a vaccine shortage.

On Tuesday, Reuters reported that the government had increased the gap without the agreement of the scientific group that it said recommended the move, citing three members of the National Technical Advisory Group on Immunisation advisory body.

India's Taj Mahal re-opened to the public on Wednesday as the country, still reeling from a disastrous second wave of the pandemic, rushes to lift restrictions to try to revitalise its economy.

Chickens, cows, paid leave, even a million-dollar apartment - these are the prizes on offer from Thailand to Indonesia to Hong Kong for those who get vaccinated against COVID-19 as nations across Asia combat vaccine hesitancy.

As more transmissible variants of the virus have driven a surge in cases in Southeast Asia in recent weeks, authorities have started offering chances in lucky draws for vaccinations.