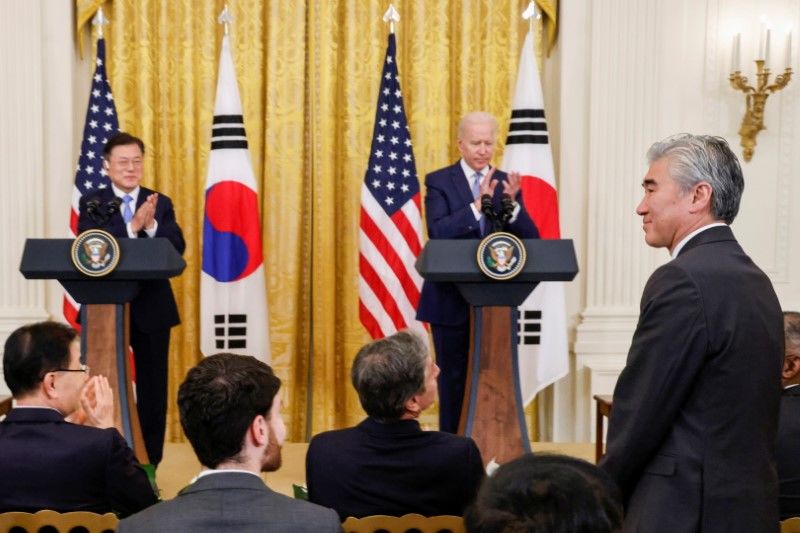 SEOUL (Reuters) -The newly appointed U.S. envoy for North Korea, Sung Kim, will make his first visit to South Korea this week for a possible three-way meeting with counterparts from Seoul and Tokyo, a South Korean foreign ministry official told Reuters on Wednesday.

The visit, from Saturday to June 24, comes after U.S. President Joe Biden and South Korean President Moon Jae-in held their first summit in May, injecting fresh urgency into efforts to engage the North in talks on its nuclear weapons.

Japan's Kyodo news agency said arrangements were being made for the visit during which the officials of the three nations would discuss the future direction of the Biden administration’s attempts to open dialogue with North Korea in pursuit of denuclearization.

The U.S. State Department said it currently had no travel to announce when asked about Sung Kim's plans.

However, asked about remarks by North Korean leader Kim Jong Un earlier on Wednesday, in which he said his country's economy had improved but urged measures to tackle a "tense" food situation due to the coronavirus pandemic and typhoons last year, a State Department spokesperson said:

"Even where we disagree with a regime like the DPRK, we support efforts to alleviate the suffering of its people. We strive to act in a manner that does not harm the North Korean people and continue to support international efforts aimed at the provision of critical humanitarian aid, should the DPRK be willing to accept it."

The spokesperson referred to North Korea by the acronym of its official name, the Democratic People's Republic of Korea, and declined to elaborate.

An independent panel of experts monitoring U.N. sanctions on North Korea recently reported that international aid groups were struggling to reach vulnerable people in the country because of pandemic lockdowns, leaving potentially hundreds of thousands without access to needed nutrients.

North Korea has rebuffed U.S. entreaties for diplomacy since Biden took over from Donald Trump, who had three summits with Kim, but failed to persuade him to give up his nuclear weapons.

Sung Kim, appointed by Biden last month, is a Korean-American diplomat who had the same role under former President Barack Obama, and helped set up Trump's summits with Kim.

Biden said at his summit with Moon he would be willing to meet Kim under the right conditions - if he agreed to discuss his nuclear program and that his advisers first met with their North Korean counterparts to lay the groundwork.

Washington has been keen to encourage dialogue between the allies on the best way forward in dealing with North Korea.