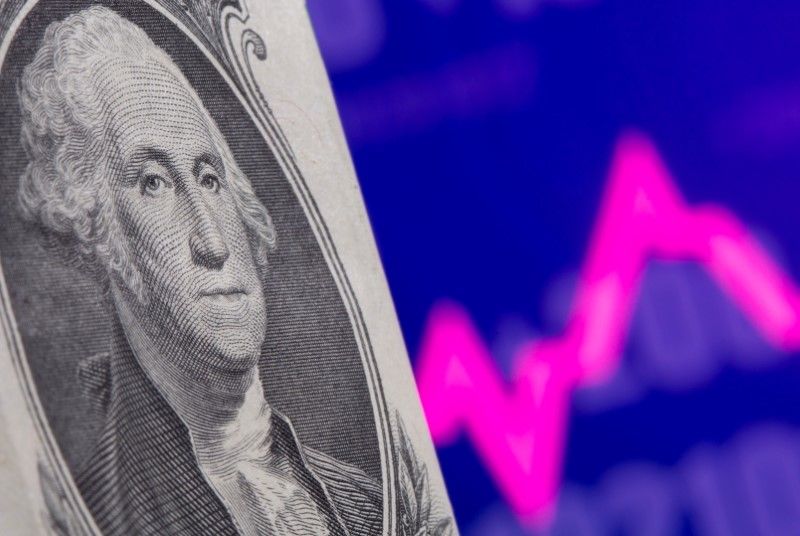 NEW YORK (Reuters) - The dollar jumped on Thursday and hit a two-month high against a basket of currencies, a day after U.S. Federal Reserve officials surprised markets by projecting a hike in interest rates and end to emergency bond-buying sooner than expected.

On Wednesday, Fed officials projected an accelerated timetable for rate increases, began talks on how to end emergency bond-buying, and said the COVID-19 pandemic was no longer a core constraint on U.S. commerce.

A majority of 11 Fed officials penciled in at least two quarter-point rate increases for 2023, adding they would keep policy supportive for now to encourage a labor market recovery.

The dollar index, which tracks the greenback against six major currencies, was up 0.53% at 91.892, its highest since mid April. On Wednesday, the dollar surged nearly 1%, its largest daily percentage gain since March 2020.

"Coming into the Fed meeting we felt there was a risk of a more hawkish outcome which could drive some USD strength if it came to happen," said Chuck Tomes, associate portfolio manager at Manulife Asset Management in Boston.

"Because of that, we did put some protection on in case of that happening," he said.

Still, Tomes said he sees the dollar rangebound to weaker over the longer term.

The Fed's new projection prompted some, including Goldman Sachs and Deutsche Bank, to abandon calls to short the dollar.

"We continue to forecast broad U.S. Dollar weakness, driven by the currency’s high valuation and a broadening global economic recovery," analysts at Goldman Sachs wrote in a note on Wednesday.

"However, more hawkish Fed expectations and the ongoing tapering debate look likely to be a headwind to Dollar shorts over the near term," said the analysts, closing their recommendation to go long the euro against the dollar.

Australia also had upbeat data, with job creation beating expectations in May and unemployment diving to pre-pandemic lows.

The dollar was 0.77% higher against the Norwegian crown after Norway's central bank kept its key interest rate unchanged as expected, but said an increase was likely in September and steepened its trajectory of subsequent rate rises as the economy recovers from the effects of COVID-19.

The stronger dollar sent sterling below $1.40 to a fresh 5-week low.